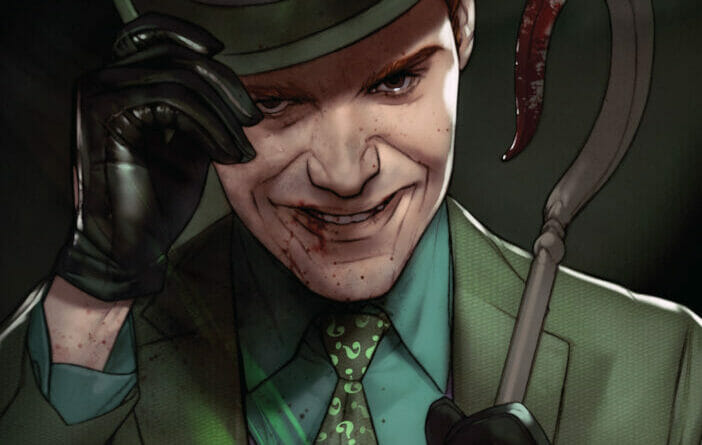 
Batman: Killing Time #2 – Chapter Two: His Pain or Mine

Similar to Batman: Killing Time #1, the story is set against an unknown narrator’s time stamps. The events of the story are told in a non-linear fashion, only providing readers with information when required. This is something new to me in a comic setting and I absolutely love it. By giving little, time-stamped explanations of events (eg 15 minutes earlier, three months earlier, 3000 years later, etc), the reader is privy to what they need to know and when; almost like the Guy Pearce film, Memento.

The story is set in three parts or distinct times: Ancient Greece, the setup, and the fallout. During the Ancient Greek timeline set 3000 years ago, reappearing again after last week, a group of rabid women—the Maenads—attack, behead and feast on King Pentheus. This is an interesting page to begin the second installment on because it feels a little like a CSI episode. There’s a crime but you’re yet to understand why. Not a bad thing, just an observation. It then shows his mother collecting the head and marching to a god at the bottom of the mountain. Interesting and will somehow tie into the larger tale.

After the success of their heist, Ed Nygma and Selina Kyle wait for the buyer of the mysterious item at the Sunway Hideout. There is a bit of back and forth, mostly Selina not being impressed with Nygma’s aloof behavior. We are shown the setup for the heist in flashbacks. The Joker makes a spectacularly well-written cameo in this issue, showcasing his more brutal nature and his minor role in the heist.

In the wake of the heist, we see Batman on the case. There is the obligatory Batman in cell cliche as he punches the $#!? out of Killer Croc. Commissioner Gordon reprimands him for it but Batsy got the details he needed. A funny moment here is when Batman displays his trademarked disappearing act in the hallways of Arkham Asylum and Gordon says aloud, “what are you hiding behind, a #%%#&@# trash can?”

Batman then takes himself to Croc’s apartment where we see Vera who has been spending big with Croc’s dirty money. Vera is a bit of a one-note character at the moment but there is a striking page where she refuses to give up information and instead blabbers a tough guy act while Batman stands in stoic silence. The juxtaposition of the colorful Vera and shadowed Dark Knight does wonders for the silent interrogator scene.

Eventually, he gets what he needs from the Penguin, not verbally because he’s in a coma but from his injuries. We learn that when Riddler attacked Cobblepot with his cane during Issue One, it was actually a series of large and small blows—Morse code. This is another incredible character-building and affirming inclusion from the writers. The story ends with the assumption that Batman has arrived at the Sunway house much to Riddler’s expectation and Selina’s eventual shock.

When the first issue ended with a successful heist, I wasn’t sure how the creators would follow it up but writer, Tom King, has succeeded in a riveting second issue. As I mentioned above, there are two key writing components that are driving this comic towards huge success: characterization and story structure. Each of the villains feels different. This might sound obvious but so often we are force-fed bland villains with one mindset, yet Tom King has delved deep into the psyche of each of the iconic villains to make them feel real. Their motivations, albeit yet to be revealed, actions and speech feel exactly like what I expect these characters to do or say while still being surprised by the story.

Four key character moments stick out for me: The Joker discussing how he maimed a man so nonchalantly that it’s weaved into another conversation; Riddler communicating with Batman in Morse Code via Penguin’s bloody body; Riddler discussing the plan in depth within Arkham and Catwoman responding indignantly; and, Batman’s silent interrogator scene while then correcting Vera by saying there’s no hyphen in Batman. The only component I am unsure about is the Ancient Greece element. I am predicting it has to do with the stolen jewel but tying in mystical and magical elements into Batman stories is not my personal favorite; however, I am here for my expectations to be subverted and positively changed.

The artwork is solid. Artist, David Marquez, perfectly matches the tone of the story and it is drawn in a way that matches the current iteration of Batman—serious and deeply driven by the characters he interacts with. At present, this is a story about the villains and they are getting a masterclass with this art.

Three key scenes grabbed my attention the most: the opening pages where the Maenads savagely attack a man, and we get a close up of their bloody mouths; a full-page spread of Joker suspending Batman upside down over a kiddie pool; and, the scene in which Nygma and Kyle discuss their plan back-to-back in padded cells in Arkham is designed to evoke emotion and character. The linework and color choices of the comic are pretty and purposeful.

I am going to do something dangerous here. I’m going to do a comparison. One of my favorite Batman storylines is the comic run called Batman: Hush. If you haven’t read it (along with The Long Halloween), do yourself a favor and get onto it! But Batman: Killing Time is gearing up to rival Hush purely with the aforementioned positives. Early days in the run but I can’t wait to see how this story unfolds.