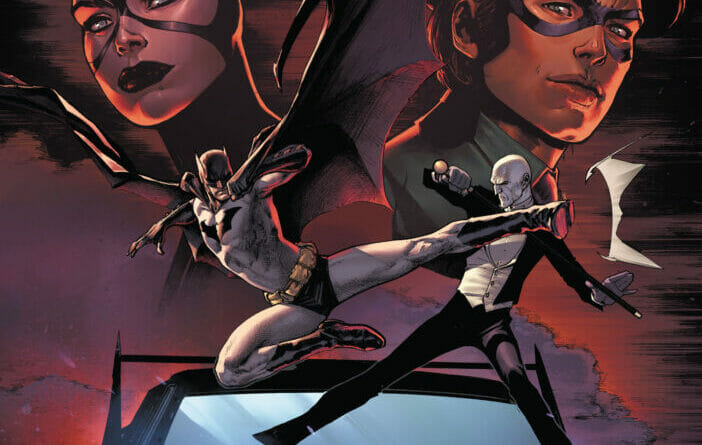 
Batman: Killing Time #3 – Every Man Has His Flaws

In this issue, we get a few answers as well as some questions raised. It is another strong issue, falling slightly from Issue #2 but the artwork and story still have me captivated. It has introduced characters while sticking to the Batman lore, which I appreciate. We begin with The Riddler bleeding out and being rushed into a car by Catwoman. The story then branches out, as it has throughout the series, into different times leading up to and stemming from that moment.

The man at the door at the end of the last episode was not in fact Batman (he was a mere 1.5 seconds late) nor was it the buyer of the mysterious stolen object (this man was about 25 minutes late), but a mysterious man who was hired by Penguin to exact vengeance, known as The Help. Scattered throughout the story is a well-executed fight sequence. Batman and “The Help” trade blows; however, not many of those punches or kicks land their mark.

Every time Batman unleashes a fist or foot, The Help expertly counters and casually explains where, and who, he recognizes the move from. This delicate nature between brains and brawn creates an eerie aura around The Help as a character I haven’t seen before. The fight ends with Batman sprawled on the ground and The Help leaving a scathing remark, “you seem very close to very good”, and drops his business card in case Bats wants to learn more.

We also receive some answers regarding the mysterious object that started it all. 730 years ago in Poland, a young boy stole “The Eye of Christ” from his local church, in an effort to save his dying sister. Unfortunately, the object does not work and it is buried with her. Then, in 1873, a digger finds the box amidst bone and wood; he is executed, and Ra’s Al Ghul takes the box from the man’s dead hand.

In an earlier flashback, we see Al Ghul gift this same box to Bruce Wayne, Bruce almost threw it away but reconsidered. The in-between time is unaccounted for but now, the Eye of Christ is in the hands of Catwoman as she sits amongst several tigers in a sanctuary. As I mentioned earlier, the artwork by Marquez is exquisite. The characters are so recognizable yet completely his own, especially Penguin and Riddler. During the fight scenes, you feel every hit and smack and thwack with linework used to exemplify speed or power.

The more gruesome aspects, like the cleaning of a bloody knife in a sink or a torture sequence, help to create a spine-chilling and sinister feel to the characters who perform them. I particularly liked the Batmobile explosion spread across full pages, Batman stealing a motorbike and looking cool doing it, and the aforementioned fight between Bats and The Help.

Tom King continues to do a great job with the non-linear sequence as well as ensuring the characters feel true to themselves. I am enjoying seeing more and more Batman characters show up, i.e. Al Ghul in this issue, so perhaps more of his rogues will make a cameo. We are now three issues down with three to go. The two biggest questions remaining are: what does the Eye of Christ do?; and, who is telling the story?