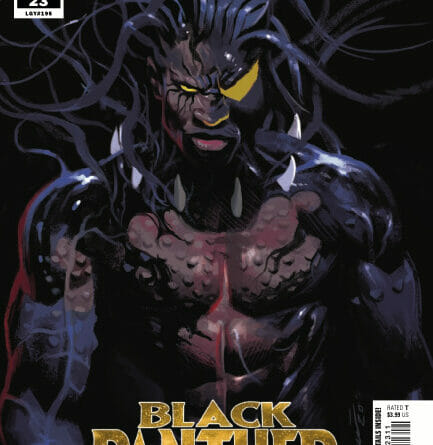 
This issue of Black Panther is like no other. We experience returns, a powerful moment, and the beginning of a great war!

Black Panther is set to do battle with his archenemies, N’Jadaka aka Erik Killmonger. However, he has been dead for some time. He was resurrected with the help of a symbiote. Now stronger than ever, Killmonger gathers his troops to fight against the Black Panther. He is still obsessed with conquering Wakanda by any means. So, let’s take a look at this issue.

We are given a flashback, explaining the discovery of a second Wakanda. T’Challa and others found this area, but it did not turn out well. The king was captured and had no memories. He was under the rule of former slaves, “The Maroons” and Emperor Killmonger. The symbiote was a source in his return, but not the only one. Zenzi and Tetu were also responsible for returning him to the living. It is also discovered that Nakia sacrificed her life, fighting Killmonger and his army.

As for T’Challa, he temporarily joined his ancestors to restore his memories. After succeeding, he returned to Earth and gather whomever he could to fight this threat. We are taken to the present day, Killmonger is making final preparations at a base in the Intergalactic Wakanda. While talking to Tetu, he has a minor migraine. He talks to the symbiote one-on-one about taking over Earth’s Wakanda. The symbiote remains him of his body being used, but Killmonger does not care.

As the pair continue their conversation, Killmonger grabs a cube, and it shows potential targets. They are planning to enter Earth’s Wakanda another way. To accomplish this they will find the gateway needed to enter. They call themselves Gods, knowing they can win. On Wakanda Prime, Black Panther has his army ready. He first talks about the significants of his late ally, Nakia. He is given a powerful speech about the fallen hero.

During this moment, we get a glimpse of his team. We have the likes of Nick Fury, Miles Morales, Okoye, Starling, White Wolf, Patriot, Ironheart, Brother Voodoo, Luke Cage, Shuri, Cloak, Storm, and more Black heroes prepared for the fight. He continues remembering Nakia while telling his forces this fight is their biggest. Back at the Intergalactic Wakanda, Bast, and Zenzi talk about Killmonger. They express that he will not fight alone. Back on Earth, Shuri complainants her brother on his speech. Brother Voodoo then speaks with the king about taking more precautions.

Beneath Lake Nyanza, Lady Ramonda and Zawavari work to find more allies. They going to propose an offer to the prisoners in exchange for their help. She even tells the sorcerer that she was once a prisoner down there. The portal is open and the prisoners are quick to ask for their release. Ramonda asks for their aid after they talk about how they were backstabbed. They also add that their imprisonment came after the theft of the land they once owned.

Ramonda tells them that helping her can result in another home for them. She speaks from the heart about the horrible acts done to them. She wants to make things right. Aside from offering the outcasts a second chance, she wants to also give them glory and honor.

T’Challa then thanks Ironheart, Falcon, and another Black hero for their support. Storm gives her husband the news that Eden and M’Baku are returning. Black Panther also believes that they are being set up. He notices the Orisha left and came back. His suspicions are true when Bast shows up, realizing she is behind something evil. Bast activates the three statues to attack Black Panther and his allies. Storm, Falcon, Photon, Ironheart, Spider-Man, Brother Voodoo, and others go fight the threat in the sky. This is where the issue ends. Yet, we get a short story about Storm stopping a young mutant.

Written by Saint Bodhi and illustrated by Alitha E. Martinez, we have “Letting Go”. After waking up to Knull’s invasion, Storm is left in fear. She has no time for that as Emma Frost helps her find a little girl wreaking havoc. She is located near Storm’s homeland. The young mutant, Abeni is using her elemental powers to kill a few men. They were responsible for killing her parents. Despite her actions, Storm is able to calm the girl down and bring her to Krakoa. From there, Storm oversees Abeni’s training and everything turns out ok.

This story was absolutely fantastic!!! You have one of the greatest Black writers Ta-Nehisi Coates sharing his creativity with the likes of Daniel Acuña and Ryan Bodenheim. The three showed why T’Challa is a great leader. The speech was not just about stopping a threat. It was about following the example of a true hero. T’Challa and his allies know the stakes of what could happen. They are willing to do the same thing Nakia did, even if gives them the slightest advantage. It was also beautiful using all the Black heroes, well-known or not in this story!

As for the art, these three and Chris O’Halloran’s work was great! As always, the detail is important and done very well. This style of the comic is just outstanding. Some of the highlights are Killmonger with the symbiote, T’Challa talking with the heroes, his allies, Nakia’s statue, and Bast activating the statues. Everything about this is awesome! Especially with the fact that is Black History Month and a tribute to the late Chadwick Boseman. What a beautiful love letter to the real-life superhero.