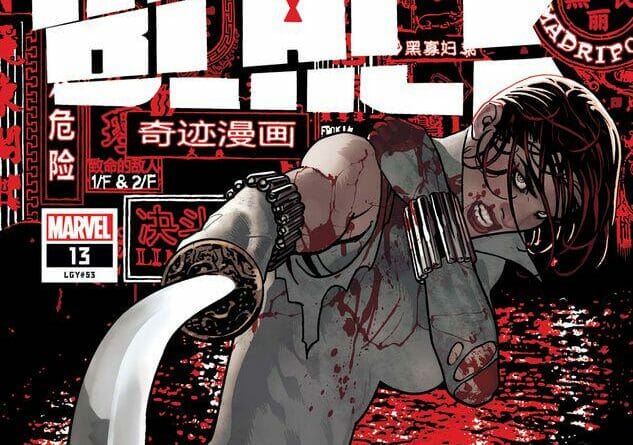 
Black Widow faces her past as she recaps an old encounter with an old foe. Tune into a story with business only being conducted with an insane battle!

Recently, Natasha Romanoff aka Black Widow had given up her civilian life to once more work alongside Yelena Belova. In Natasha’s old life, she had a husband and child. Yet, his life as the Black Widow led to her asking the Winter Soldier to move them far far away. As for her team, Yelena or the White Widow, Anya Corazon aka Spider-Girl, and Lucy Nguyen invade a gala. In that event, Natasha once more does battle with an old foe from a Madripoor battle, years prior. This being is named the Living Blade.

We start in Madripoor, years ago as Black Widow fights her foe. As we see her get the upper hand, she is sliced by him. She continues narrating as she tries to find cover. While citing the Living Blade as her “Boogeyman”, she is sliced and stabbed again. Natasha pulls the knife out of her shoulder and continues fighting. She manages to cut him too and dodge another attack.

Yet, she is given a right hook to the face. Catching herself, she knocks him to the ground. She then used her wristbands to send a Widow’s Bite shock but was cut again. The pair find themselves on the ground. With her quick thinking, Natasha throws the knife into an electrical source. This distraction gives her time to escape.

She then uses a grappling hook, so that she won’t be seen. However, the Living Blade sees her and cuts the wire she is swinging on. Natasha then falls a great distance to the ground. She fell through a glass ceiling in front of civilians dancing in a club. A Filipino man asks if she is ok. She responds that she is but also tells him to tell people to leave the club. The bloody hero then knocks over the Living Blade with a chair. Once again, she uses her Widow Bite to stun him.

Natasha tries putting him to sleep but is cut open again. He then throws her off of him and she does her iconic catch pose. Another distraction is made for her to escape. She even states that she has seconds before he finds her. After kicking a few men out of the restroom, she is once more confronted by the foe. She uses a fire extinguisher to dodge the attacks of the sword. Even getting a few attacks on him. After knocking the Living Blade into a stall, she leaves the bathroom via an air vent.

She briefly encounters a man doing his business while listening to some music. Black Widow then finds herself in a room with three traffickers and many scared women. Knowing her reputation, the French traffickers flee as the Avenger tends to the victims. She is once again encountered by the Living Blade. However, he leaves her, seeing that she is injured. After leaving, she states that she lives to fight another day. Despite this, she knows that this is only the beginning.

Kelly Thompson does a fantastic job writing this story! I loved how it was literally Natasha getting down to business. No smug or cheesy comments, just fighting. I also love how the Living Blade wasn’t villain monologuing either. Most of the talking that happened was towards the end or was by the civilians. This was very interesting and realistic! I am fine with the narration too, as it added a lot to the story. This was a very unique take on the character.

As for the art, Rafael T. Pimentel and Jordie Bellaire only helped the story’s credibility. The details were present as always. I loved the one-shots of the battle! It felt as if I was witnessing the fight in real-time. The shot of Natasha about to fight in front of the hostages was one of my favorite illustrations here. Especially with the fact that it mirrors the cover of the issue. The last page was great too! She is exhausted and the struggle shows, but she knows what happened isn’t over. The art was full of grace and life!