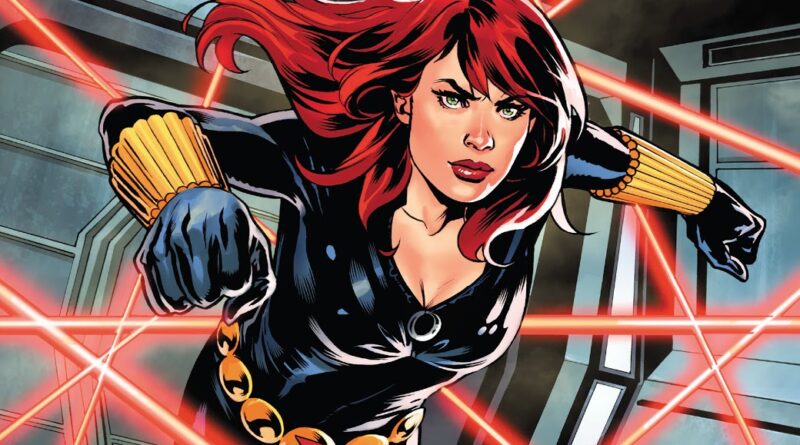 Based on the cover, Black Widow is back at it again with another impossible mission. The assassin is sent out by S.H.I.E.L.D. to retrieve a magic-based weapon. This powerful device belonged to the Sorcerous Supreme, Doctor Strange. With it being in the possession of a powerful boss, the world is at risk. The story is titled, “Widow’s Sting” which is a reference to what will help Natasha in her mission.

Silvio Manfredi, otherwise known as Silvermane is a crime boss throwing a party at an estate in Long Island. After knocking out a few guards, Natasha wears a green dress over her costume. This is so she can go undercover. However, she is spotted by Manfredi, his muscle, and a mysterious masked woman. Her cover is not blown as a belief conversation took place. Afterward, the crime boss invites other bosses into the dining room.

The Maggia family discusses Manfredi’s new position as their head. He also announces that he’ll take 50% of other earnings. After a disagreement, Manfredi shows off the Wand of Watoomb he stole from an auction. He continues boosting its power by displaying its magic. He came close to sending the other family members to different dimensions. They attempt to shot him, but he turns all of their guns into dust.

Marko, Manfredi’s muscle is tasked with returning the wand to a highly secured safely. Yet, he is being stalked by Black Widow. Marko is suspicious of someone watching him but dismisses it. Meanwhile, Natasha is getting back to agents of S.H.I.E.L.D., informing them that she is close to getting the wand. The assassin then removes her dress and is once again just in her suit. She can get past a few deadly traps with the help of her Widow Sting devices. She is close to the weapon and even disables traps surrounding it.

Just as she walks over to it, her hand goes through the wand. Natasha is confused and then ambushed by Marko. The big man had the real wand, while Natasha was looking at a hologram of the weapon. The two fight, with Natasha, continue to struggle due to Marko’s recent enhancements. Natasha can disable Marko, once again with the help of her Widow Sting.

Despite handling the Man-Mountain Marko, Natasha must now deal with Silvermane. Manfredi is now in a cybernetic form and is trying to stop her from taking the wand. She attempts to use it, but cannot. Manfredi explains while choking her that it takes time to master. As he continues to monologue, he is confronted by the masked woman from earlier. She unmasks herself, with him only seeing her disfigured face. With this distraction, Natasha uses her Widow Sting again, taking down Silvermane. After this, the two women talk.

It is discovered that the masked women are Agent Astra. An agent of S.H.I.E.L.D. sent to spy on the Maggia family. However, her cover was blown and she was disfigured by Manfredi. He decided to keep her around as a prisoner by her side. She had faith her organization would send someone to save her. After seeing Black Widow, she knew she was saved.

The story is a pretty decent read. Ralph Macchio’s writing really helped enhanced Black Widow and his mission. He accomplished this by showing her self-dialogue. From describing her challenges to introducing us to the main villain, we are shown Natasha’s point of view. Sure, she is doing her job, but it does not mean her mind is only on the job.

As for art, Simone Buonfantino’s and Rachelle Rosenberg did a great job with visuals. The action sequences are stunning. The reveal of Silvermane and Black Widow passing the traps are great to view. As for the overall story, it’s an enjoyable read. Yet, it is not a perfect story. It felt rushed, not too much happened. Luckily, this was the first issue for this storyline.