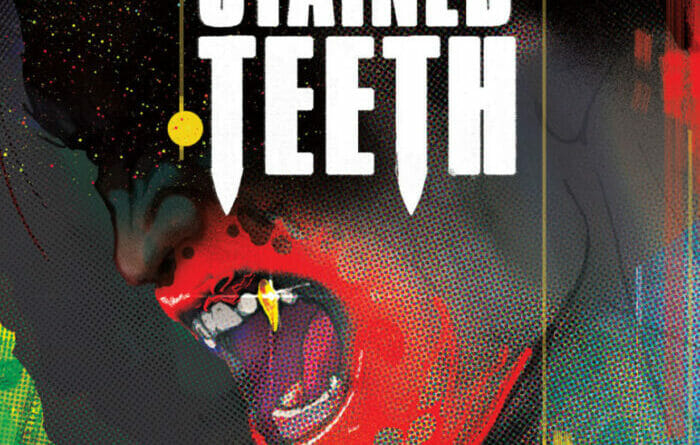 
**WARNING: Minor Spoilers Ahead for This Advanced Review of
Blood-Stained Teeth #1**

Blood-Stained Teeth is the newest release from Image Comics, and is the lovechild of Christian Ward and Patric Reynolds, melding together crime, horror, and ultimatums to bring you a new side to vampire mythology. Within this world, vampires don’t only hunger for blood but also money.

We are introduced to the world of vampires separated into two divisions: First Borns who are rich, powerful, and deemed worthy, and they have the ability to ‘turn’ the second kind; Sips who are vicious and unsatisfiable killers. Atticus Sloane is a First Born who uses his ability to turn humans into Sips… for a price (Sips teetering on the border of being taken from the internet slang “simps”). Ward and Reynolds are creating their own vampire lore but stick with the traditional—drinking blood, eternal life, and burning in sunlight (no sparkling Cullens here).

To start, there is a lot going on. We are thrown a ton of information in a haphazard way in order to build this world. Characters are introduced with a title card splashed across the panel, which reminds me of 2016’s Suicide Squad. Atticus Slone, the main character, is an asshole and misanthrope who, at first, is unlikable but you end up rooting for him because the First Born Council are even bigger assholes.

It’s ok to have an unlikable protagonist, and I assume this was the creators’ goal, but in the end, I wasn’t really fussed with what happened to him. I’m hoping the following issues provide us opportunities to showcase Sloane’s cunning, guile and expertise. A lovely nod to vampire history is the leader of the Council being named Brother Stoker (as in Bram Stoker). And he is famed for inventing Dracula so vampires could hide behind the myth.

Although the premise is unique, I felt underwhelmed with this issue. The fact Sloane has been forced to go back and kill all of the Sips he had turned felt a bit forced. With such limited space in the issue and so much happening, I felt like I hadn’t developed a connection with Sloane nor earned the respect of Stoker nor cared about any Sips to warrant this huge ultimatum. Perhaps, and I hope, something else rises in Issue 2 to warrant the soulful and character-driven tags it has been sold as.

I suppose the lingering factor will be Dr. Beverley Phillips, who (and this is merely alluded to) is looking to find a cure for her daughter’s sickness. I assume this will play on Sloane’s desire for money and actually helping someone versus the risk he plays by defying Stoker’s orders.

The artwork and coloring slot together in an almost psychedelic manner. It is a unique tone that combines the lysergic nature of a seedy nightclub with the grittiness of a vampire underworld. It almost reminds me of a piece of Andy Warhol art sans beans. Not to take anything away because it is exceptionally and purposefully done, but I would have liked a bit more of a serious tone; however, that’s my opinion, and I think Ward and Reynolds are trying to separate themselves from the familiar vampire tropes.

What the story did well was combine humanity’s affinity with popularity and the occult with its aversion to the mundanity and finite nature of life. Showcasing the differences between First Borns and Sips was a nice touch, especially in the frenzy feasting scene (I personally would have liked to see more gore). This is a component that can definitely be built upon and become a reason for tension within the story and for Sloane, something the story desperately needs.

Going forward, I will definitely finish the series. There is a lot of potential here with Blood-Stained Teeth, and it has me intrigued to get to know the world more and find out what Ward and Reynolds have in store, I just wish it enabled me to sink my teeth in a bit more during Issue 1. Give it a whirl if you’re into vampires, jumping into a pre-existing world, or a technicolor dreamscape.

Blood-Stained Teeth #1 is out on April 27th.