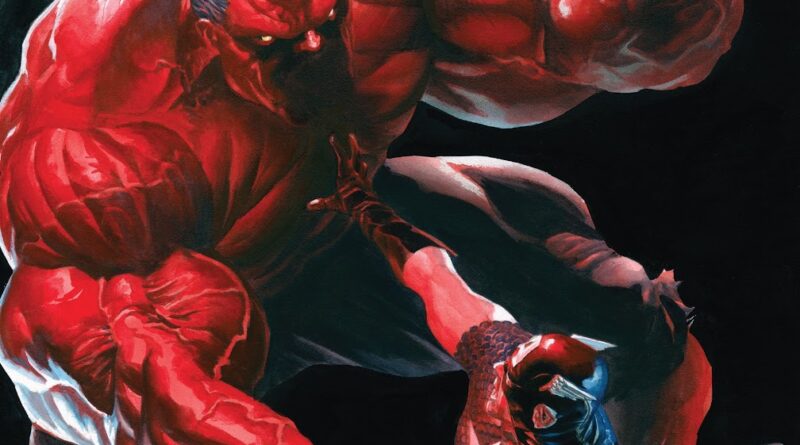 
After being brought back to his proper age, Captain America and his team are tasked with a special rescue mission.

Steve Rogers continues his adventures as Captain America. After being brought back to his proper age, Rogers and his team are tasked with a recuse mission. According to the cover of the issue, by Alex Ross, it looks as if Cap will have a face-off with Red Hulk. However, he along with Sharon Carter, Falcon, and the Winter Soldier are tasked with saving him.

Along with saving Red Hulk’s alter ego, Thunderbolt Ross, Cap’s team also must recuse Peggy Carter, Black Widow, and Misty Knight. Yet, Carter was able to release herself from her shackles. Cap and co travel to Madripoor as that is where the hostages are held. Yet, to accomplish this mission, they must stop the Red Skull, Alexa Lukin, and Lukin’s Power Elite forces. In the seventh part of the story, All Die Young, Team Cap will do what it takes to save these individuals.

In the beginning, we reflect on Cap being restored to young age. Rogers narrators the events of the mission taking place. Sharon also reunites with her resurrected aunt, as she was aging. We then transition to Falcon saving the older Carter from falling. Next, Ross is being pummeled by Brock Rumlow, otherwise known as Crossbones. As this happens, both Black Widow and Misty Knight look on. Another flashback shows Bucky receiving orders from Ross, as he is mocked for his time as a sleeper agent.

Bucky infiltrates a lab, using his arm and chip to find the opposer’s airpower. Earlier, the team set charges to take them out. He is shocked to find that to planes are headed towards Captain America, Falcon, and Agent 13. While fighting the Power Elite, Rogers explains how he is thankful for his allies. He said that they more than just partners, but people he turns to for personal help. He went into a bit more detail while talking about Sharon and Bucky.

Once again, we are brought back to the past. The Hydra Cap is referenced and Sharon was kidnapped by Lukin. The younger Carter at the time was an old woman. Lukin once was on the good side but would turn on them. This is when is shown that she is also searching for Ross.

Jumping back to the present, Crossbones continues beating on Ross. Knight and Romanoff continue witnessing, they want his beating to end with him being Run Hulk. Lukin then alerts Rumlow that Captain America is coming. Rumlow orders Cutthroat continue to torturing and eventually kill Ross. Crossbones is in the air with Lukin, and are being chased down by Falcon. As for Bucky, he is chasing after the planes with another one that is remotely controlled. The planes being chased were also tracking Falcon. Bucky is left in shock and worry as one of Sam’s wings are shot.

Ross is still being tortured by Cutthroat. Knight wants to intervene, but Romanoff tells her that Red Hulk is almost here. This is planned so that the villainous base was destroyed. As Falcon is falling, he regains consciousness and is still flying. His equipment is fine and he gets back to hunting. After this, Red Hulk finally awakens and knockouts Cutthroat. Red Hulk then destroys the planes Bucky was after. A raging Ross looks at Captain America and sautés him.

The story was a pretty decent read. The duo of Ta-Nehisi Coates and Leonard Kirk worked. They showed that the story was not just about a recuse mission. We see Rogers’s human side. He is thankful for the people helping him on this mission. He even gains respect for Ross. He believed that no one should ever be subject to what he went through. Even Ross’s salute was a sign of that mutual respect. That is the story’s theme, this feels genuine. If Coates and Kirk continue showing Steve Rogers’s human side, we have one of Captain America’s greatest storylines.

Carlos Lao’s and Matt Milla’s work was great to look at. The details of each character were important and they nailed that. They did not just make sure you actually see details, they made you feel them too. The best panel in the story goes to Sharon blast the Power Elite with beams from her suit. However, it is not the only one.

The shot of Ross resuming his role as Red Hulk was beautiful. This shot alone gave the message, “what doesn’t kill you makes you stronger.” Also, I cannot get over the rage in Red Hulk’s eyes changing to a sense of calmness. Leading to the eventual salute he gave to Cap, as Rogers calls him a patriot.

Finally, the start and end cover, by Alex Ross will never get old. His work is iconic within the comic book industry. It is obvious Marvel used his art to sell this story. I say this because his art is never seen in the story. Even the tease of a Red Hulk and Captain America fight does not come true. This was likely done on purpose. Yet, it was not a bad move.