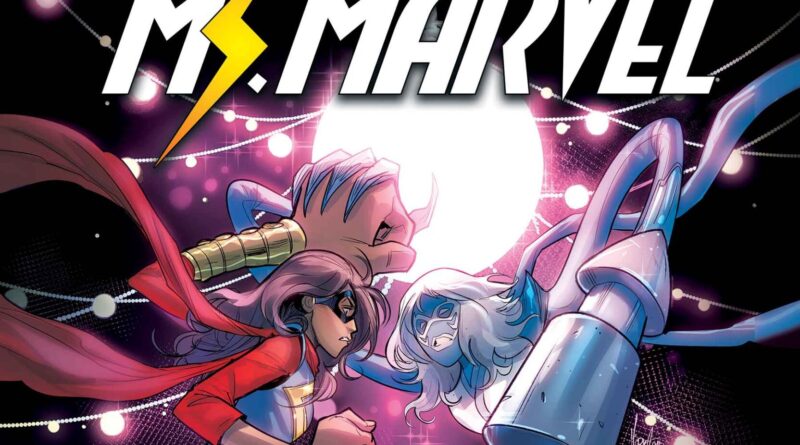 
The 75th issue of Ms. Marvel goes on sale in January

This January, writer Saladin Ahmed and artist Minkyu Jung will end their acclaimed run on MAGNIFICENT MS. MARVEL with an oversized finale issue.

Since launching last year, MAGNIFICENT MS. MARVEL has been a revolutionary era for Kamala Khan, with surprising developments in both her personal life and burgeoning super hero career. Between saving the alien planet of Saffa to fighting against the mysterious and deadly entity known as Stormranger, Kamala Khan also teamed up with new allies to defend her home of Jersey City.

Ahmed and Jung will end this thrilling journey with an issue that sees Ms. Marvel facing down Stormranger with the help of new hero Amulet, all while confronting the ongoing drama surrounding her family and friends. The special giant-sized issue also happens to the be the 75th issue of Kamala Khan’s solo adventures and will be a worthy capstone to a run that has greatly enhanced the legacy of one of Marvel’s brightest stars.

Here’s what Saladin had to say about closing out his tenure on the title:

“Forget super heroes, Kamala Khan is just plain one of the most important fictional characters of her generation. I knew that was true even before I came to write comics. But meeting and hearing from fans since launching THE MAGNIFICENT MS. MARVEL has made it clearer and clearer. Kamala means so much to so many! Muslim readers. South Asian readers. But also people of all ages and cultures from all over the world who want to root for a selfless, kindhearted (possibly slightly dorky) hero in this grim, stingy era.

“Minkyu Jung’s pencils and designs went effortlessly from the streets of Jersey City to the alien plains of Saffa to night sky battles, always maintaining the human emotion that drives this book. From homicidal battlesuits to awkward conversations, he constantly pushed our story in new visual directions. I can’t imagine a more perfect artist for this run, and I’m so happy we got to work together.

“Of course a hero’s myth becomes most fully realized when it is passed between storytellers, changing with each telling. We’ve brought Kamala face to face with new enemies and to new places in her personal life, sent her to space and to the edge of the law. Now others will tell her story their way. I can’t wait to see what that looks like.”

Fans won’t need to look far to see what Ms. Marvel is up to next. A major player in the Marvel Universe since her debut in 2014, the former Avenger is currently fighting alongside fellow heroes against injustice in CHAMPIONS by Eve L. Ewing, with even more adventures on the way.

“Over the years, Ms. Marvel has drawn fans everywhere into the Marvel Universe through her heroism, her strength, and her quintessential story about what it means to be a hero – a story that we all can hear and relate to,” said Marvel Editor-in-Chief C.B. Cebulski. “Saladin and Minkyu’s run on Ms. Marvel took that journey to thrilling new heights within the Marvel Universe, and the creative team here has been truly magnificent. We are so excited to show you what’s in store for Kamala next. More news to come in 2021!”

Be sure to celebrate the latest milestone for Ms. Marvel when MAGNIFICENT MS. MARVEL #18 hits stands in January and stay tuned for more exciting Ms. Marvel news to come! For more information, visit Marvel.com.