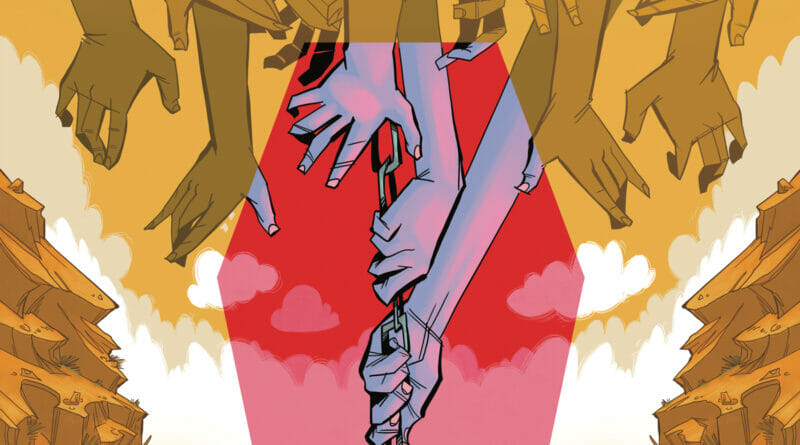 Chained to the Grave (Review)

This is one crazy western story! We have cowboys, horses, Native-Americans, and more. Yet, this story is darker than the average cowboy tale. Chained to the Grave looks at how a man was brought back from the dead. We see that he is a family man and proud of it. However, the book also shows high stakes for our main protagonist. No punches are pulled as you’ll witness swears, blood, and sexual activity. Without further ado, let’s get to know Roy Mason.

We see Roy raising from his grave resembling a zombie, but has his sanity. We even get a glimpse of his murder as he awakens. He is chained to his headstone, thus the title of the story. The chained man walks over to a mysterious woman in the rain. After falling over, she tells him to come into her home. Turns out the female is his wife, Kora.

The former widow is happy to see her undead husband. She is so happy in fact that she tries to give him “a good time”. However, their twins walk in on them. They were stunned and excited to see their father. He plans to take the kids on a trip. Also, Kora reveals that Roy is alive because of an assist from someone named Thunderbird.

We then jump to the city, where Dahateste is getting a horse. The Native is spots a relative from her village asking them to return. However, Dahateste wants to put shoes on their horse. They aren’t even worried even when their friend shows them a bit mark. They got the marks from a Wolfpac and their grandfather was taken. Eventually, the young woman takes her horse and goes to find those responsible.

Elsewhere, two grown women are talking with a man. Turns out, these three were responsible for the attack and invasion. It is explained that they too used the aid of this Thunderbird character. After this, they are tasked with finding and once again killing Roy. According to the man, Roy stole gold from him and killed him for the theft.

Back to Roy, his family travel and tells the tale of how he was killed. He blames his brother for getting him killed. The heist Roy was a part of was never seen as one by him. His brother took the gold, gave it to Roy, and had to move it north. Man people were killed, including Roy. During the story, he tells them that he has a target on his back. He wants to protect them, but a group of rouges is after him. Safe to assume, that man from earlier hired these men.

The family makes it to the trainyard. Roy then realizes that they have been tailed. Roy is fighting them off as best as he can. Meanwhile, he yells for his kids to get to safety. Trains are flying, headstones are used as weapons, and pistols are being drawn. Two people are prepared to shot Roy dead. He too draws his gun but is then saved Dahateste. The family and the Native get on the train. However, Kora is shot in the head and dies. This leaves the kids and Roy emotional. Dahateste smokes and a random homeless person in the same train as them.

The collaboration of Andy Eschenbach and Brian Level was awesome! Both writers showed the same side of the wild west but made it more than just generic. We see a man come back just want to be with his beautiful family. I was not expecting to see a shocking moment like Kora’s death. To get emotion out of a story like this is an accomplishment! This gives me Punisher vibes, minus his kids dying and the setting. This was a good tale, told by good writers.

As for the art in Chained to the Grave, Kate Sherron did a great job. I wasn’t a huge fan of the style. Yet, I liked how it was its own thing. The detail is always important and she did great with that. Overall, she gave a style that not everyone was familiar with. This worked and can be used as inspiration for other artists.

Chained to the Grave is available now wherever books are sold!