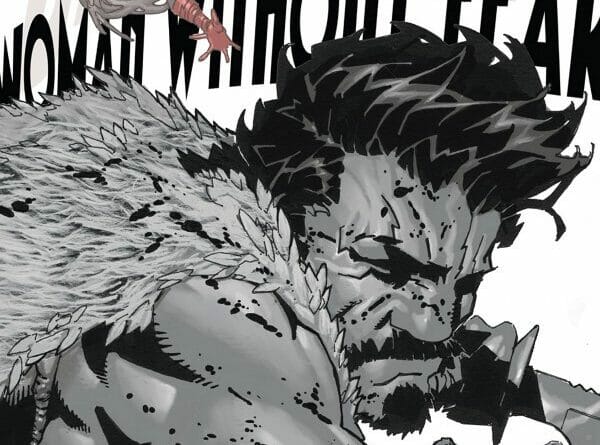 
Who will win in the battle between Hunter vs Ninja? – Spoilers Ahead For Daredevil: Woman Without Fear #3

In the last issue, Elektra was caught at a disadvantage when Kraven brought her out in the open. Vigilantes are illegal because of Mayor Fisk. Kraven is part of a task force that allows him to hunt heroes. This puts a target on Elektra’s back with the authorities. The story starts off with Kraven fighting Elektra in front of the public. They are one of the most famous fighters in history. They are both so intense no one is trying to break up the fight.

Civilians and the authorities are all entranced. Kraven manages to punch Elektra in the face, chipping her mask. Kraven is physically stronger so a straight fistfight leaves her at a disadvantage. Elektra realizes this and tries to make up a plan to turn the fight in her favor. She kicks him in the face, running into a school building.

Elektra realizes that even though she is in the Daredevil suit, she is not the same as Matt Murdock. He is a boxer-brawler. She is a ninja. So she starts fighting like one. She draws Kraven out, manipulating him by putting her blood on the floor. He believes he is tracking her so it leads him to act cocky. This leads him to a dark room where she is waiting. She strikes his arm rendering it useless. He gets angry at this. This makes him and his fighting sloppy. She hides back in the shadows, striking him over and over again until he falls.

Before she leaves, a bright light floods the room revealing Aka, Elektra’s old teacher from when she worked for The Hand. She tells Elektra that she is impressed. That she knows all about Elektra trying to take them down. How The Hand is too powerful an organization to be stopped. Glass shatters and with that, she disappears. Elektra manages to get out of the school undetected.

She finds Goldy again, a friend of hers that Kraven had as a hostage in Daredevil: Woman Without Fear #2. He is crying when he tells her Matt Murdock is dead. He was told on the phone that he was killed in his apartment. The main suspect is Wilson Fisk. Heartbroken, yet angry she pulls out her dull twin sai.

She sharpens them into a deadly point along a concrete wall. Even though she took a vow not to kill when she took the title of Daredevil, she now feels an overwhelming bloodlust for the man who killed her true love. She tells him that she is going to kill Wilson Fisk no matter what it takes.

The artist in this comic book is Rafael De Latorre, who never disappoints with his art.  The art is colorful and vibrant. The action between Elektra and Kraven is very well done. He makes Elektra look beautiful yet dangerous. I love the attention to detail he puts into his characters. His backgrounds are also interesting to look at. If the comic had no words in it, I would still be satisfied just to look at his art for this book. I am very glad he was the artist for this series.

The writer is Chip Zdarsky…you can tell really gets the character of Elektra Natchios and writes her perfectly. He is either a fan of the character or really did his research because his writing is so good for her. I enjoy how he makes her think. Even though she’s a hero she still thinks like an assassin.

Her fight with Kraven was great. I also like how he portrays the love she has for Matt Murdock. It’s interesting seeing the growth she has had from a morally gray character to a hero. I’m sad to see this series go but I am glad he is going to be writing more for Daredevil in the future.  Overall, this was a fantastic read!