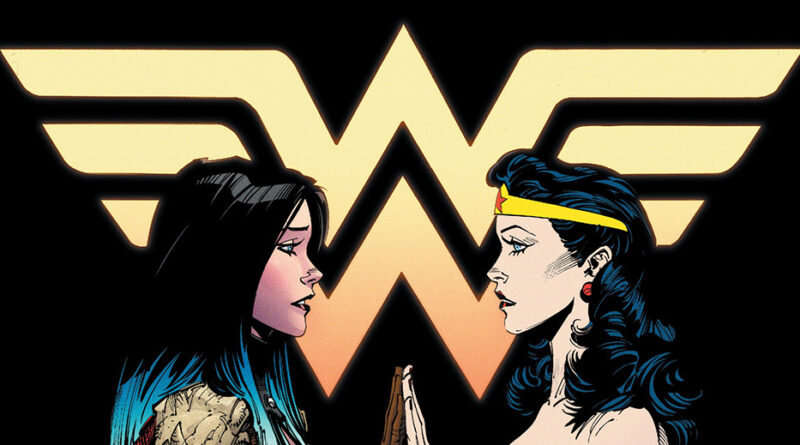 
Scott Snyder and Greg Capullo’s intense Dark Knights Death Metal event has come to a close in “Rock Out” fashion.

The end has arrived for many, and for some its just the beginning.

Scott Snyder and Greg Capullo’s intense Dark Knights Death Metal event has come to a close in “rock out” fashion. (Sorry couldn’t help myself lol) With the Multiverse at the Darkest Night, One Who Laughs, etc.. mercy. Wonder Woman finally gains enough Anti-Crisis Energy to give our heroes a fighting chance. Before any SPOILERS are mentioned I will say this, it finally makes sense! The details will be below but i will say between the numerous tie-ins and delays for Death Metal I am very happy with its conclusion. The action didn’t disappoint, the constant struggle of overwhelming demise not only pushed our heroes to their breaking point but even the most avid reader to their edge.

At so many points of this run I found myself constantly saying but how can they really win this, are they even supposed to win? By all means, I was not expecting a happy ending because that all depends on personal preference but the ending delivered what was needed. So to all, I will say if you didn’t pick up every issue or chose to hold off the purchase this is a trade that you will want to get!

Now SPOILERS! Holy crap this was a doozy. Death Metal has so much to unpack with this last issue but I’ll try and hit the major points.

Our heroes are doing their best to hold off the forces of The one who laughs dark earths. But are taking heavy casualties as expected. Batman and bat family struggling against the Robin King (which I love btw. That Robin King is nuts haha). The super family barely holding it together against a Superman who only got more powerful by passing by more galaxies and powered by stronger yellow suns. And just everyone fighting a darker side to their mythos that will give anyone chills.

Whereas Diana knows at the moment The One who Laughs has the advantage he has more power then she gained from the anti-crisis energy but she is still putting up her best! With world shattering scenes of WW shoving a planet down his throat and the two easily breaking through time and space during their battle. The war looks hopeless still.

But The One Who Laughs is not just using his power he is focusing on breaking Diana’s spirit. Because we find out that he needs every ounce of strength to fulfill his mission. And that’s killing the Hands of Creations. Perpetua’s masters started the universes in the first place. Resorting to mind games the two continue to every era we know of the DC universe including the beginning.

Within the between pages, we have some great visuals of our heroes fighting tooth and nail. Superman willing to sacrifice himself for his family. Aquaman, flash, green lanterns, all doing the same. Batman as well seeing so much lost his hand taken from him Robin King believes the battle is his. But Batman would never be that careless as to leave the Black ring on his finger. And he then brings back all the dead not just the good but even the bad to war even further against the evil child. It’s a gruesome book, to say the least, but it’s a war at the end of the day.

It’s at this moment where even the sight of her friends and families dying, fighting with everything they have left that helps Diana make her choice and that’s to keep fighting! Using the hand of creation as a weakening blow she is now able to push him forward to the very end. A sun that will eventually consume all. A forge if you will that will melt all his evil away, the end of all things. The One Who Laughs is finally defeated, at the cost of everything. “The Hands” still plan to destroy the universe for all the evil that has transpired throughout the generations. But one way or another truth has prevailed.

With the war concluded it’s now time to see the outcome of this insanity. The Hands have decided not to destroy the entirety of the universe once and for all. In fact, for the choice Wonder Woman made to save them even with the knowledge that they will destroy all she loved. They have seen the potential for great good from them as a whole. Restoring all who were lost during this great war and granting the heroes the Truth of all the past multiversal events. Which is crazy on so many levels. Each hero remembers the trauma, the loss, the bad era costumes you name it! It is a gift to our heroes to move forward.

The Earth won this round. Perpetua and The One Who Laughs did not win the day. Thanks to the efforts of our heroes and villains. Sure they have their own agendas but they knew the only way they can continue is to work side by side. With the earth saved the world parties and plans for the next trials they will face.

A new Hall of Justice dubbed the Totality will be the meeting point for a new team that will monitor the other existing earths and the greater Omniverse. We see a new Parallel Earth they named Elseworld which i can only imagine some great tales to be cooked up from, as well as teased Darkseid’s absence from all the turmoil. So lots to get excited about with the last few pages.

Were given the ending we needed to move forward from so many decades of reboots, retcons, and just new timeline shifts. With this event, we can look forward to a more cohesive timeline from Golden Age Comics to the Modern Age. Which can hopefully give us a chance for fresh stories and new exciting characters. I love my DC Heroes but I want to see them pass the mantle too. And I believe this is what we will get a glimpse of in FUTURE STATE! All in all Death Metal set some things right and potentially brought us some fun creations that can still be used beyond just the Batman Who Laughs.

And finally give us a reason to look to new characters to fill the void of our constant reboots. I for one think our heroes need a break. Let us know in the comments how you liked Death Metal and what you think about all this new craziness stemming from the DC verse. Hope you enjoyed the review, Stay Nerdy my friends.