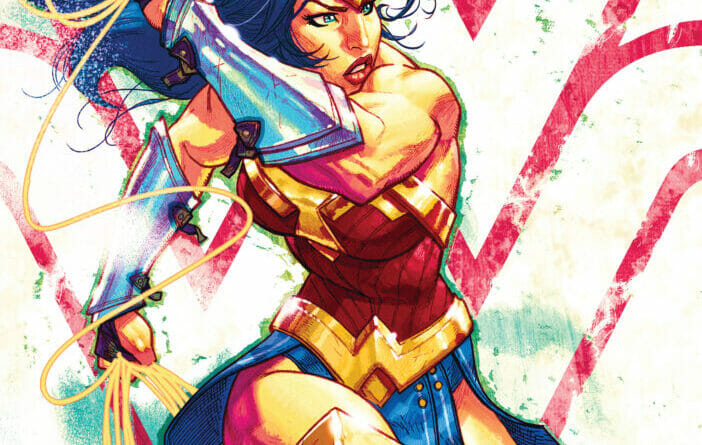 
This week’s DC Comics releases include a slew of new Annual issues ranging from Batman to Wonder Woman, let’s take a look!

Thanksgiving has come and went but if there’s anything to be thankful for is the new issues of DC Comics. This week DC Comics is releasing a slew of new DC Comics Annuals. We have previews for every DC Comics Annual issue being released, including the rest of this week’s additional titles. Since you’re already here, let us know what issues you will be picking up this week! Let’s take a look!

THE FACE-OFF YOU’VE BEEN WAITING FOR! SUPERMAN AND THE AUTHORITY finally face MONGUL and his champions head-on! The fates of Warworld and all who live under Mongul’s rule hang in the balance…but He Who Holds All Chains is better prepared than Superman knows. Not everyone walks away from this one!

Batman #107-111 have featured an epic, brutal tale of Batman’s frenemy Ghost-Maker in the backup stories…and the senses-shattering conclusion to the saga is here! Ghost-Maker has fought his way across Devil Skull Island, and he’s about to face every single villain from his rogues gallery…at once? Can even this legendary warrior survive the onslaught?

As Gotham’s Fear State comes to a close, a new day dawns on the city…one without Batman. But the Dark Knight’s absence does not mean the city is without heroes. Join James Tynion IV and Riccardo Federici as they bring Fear State to its conclusion and introduce a new status quo that will reverberate throughout the DCU for years to come.

BATMAN VS. EQUILIBRIUM! It’s Batman versus Equilibrium in a brutal battle to save every single person the Dark Knight has rescued…ever! The stunning conclusion to the epic series!

We don’t choose who we save, Bruce. You treat the patient who needs your help.—Thomas Wayne Shadows of the Bat begins here! In the prelude to January’s epic new Detective Comics event, Mayor Nakano has signed off on the construction of a new Arkham Tower in the heart of Gotham City, and the Bat-Family is torn. Batman has long seen Arkham as a necessary, if flawed, cog in the gears of Gotham City—a temporary solution to larger problems that in many ways mirrors his approach as Batman.

Nightwing, however, who grew up watching Arkham mutate into a villain factory, believes a different approach is needed. But Bruce and Dick will need to see eye to eye on more than just Arkham Tower, as a new villain known as THE MAEGER MAN wreaks havoc in the streets and becomes the embodiment of Gotham’s broken system!

Gotham City may be protected by the Dark Knight, but this major metropolitan destination is also plagued by some of the deadliest, most nefarious villains in the DC Universe! In this oversize anniversary giant, DC Comics proudly presents tales of Batman’s deadliest foes written and drawn by some of the biggest, most exciting names in comics! 2021 marks an anniversary year for the Scarecrow, Poison Ivy, Ra’s al Ghul, Talia al Ghul, the Mad Hatter, Killer Moth, and the original Red Hood, and Gotham City Villains Anniversary Giant #1 brings these baddies to life in some big ways! Also featuring the anniversary celebration of the Penguin, written by none other than the man who brought Oswald Cobblepot to life in Batman Returns, star of the silver screen Danny DeVito!

So long, Dakota-with bridges burned and allies abandoned, Curtis Metcalf is on the move! He’s tracked down Edwin Alva’s former partner, Asher Sim, in Singapore to get the truth about their early days…and find some leverage he can use. But can Sim be trusted? Or is he as dangerous as Alva?

After barely making it out of Atlantis alive, the Justice League Dark regroups and prepares themselves for the ultimate battle for magic against the finest sorcerer to ever live…MERLIN. It’ll take the minds and memories of WONDER WOMAN, RANDHIR SINGH, and an unexpected visitor to unlock the mystery behind the villain’s sudden appearance and what he’s after. Only with that vital information does our team of magical misfits stand a chance at saving the world from a threat the likes of which the Justice League could never survive! You won’t want to miss this oversize tale that’ll affect the future of magic in the DCU for years to come!

After the shocking ending of Infinite Frontier, Justice League Incarnate defends the Multiverse from Darkseid across infinite Earths!

Following a devastating defeat at the hands of the one true Darkseid, the Superman of Earth-23 leads a team of superheroes from myriad worlds that includes Flashpoint Batman, China’s Flash from Earth-0, Captain Carrot from Earth-26, and the brand new superhero DR. MULTIVERSE from Earth-8 in a last-ditch effort to stop the end of every possible universe as we know it!

Written by Joshua Williamson and Dennis Culver with first-issue art by Brandon Peterson and Andrei Berssan and a rotating cast of artists exploring the many different worlds of the DC Multiverse, this can’t-miss series is the next thrilling chapter in the Infinite Frontier saga!

Dick Grayson and Jason Todd, the first Robins, both long ago stepped out of the shadow of the Bat and began walking very different paths on their respective journeys to become who they are today. But now their paths converge and these two brothers unite for one goal. With escrima stick and a crowbar combined, Nightwing and Red Hood are ready for anything…anything except what they have to face next! Don’t miss out on this explosive adventure!

TALE OF THE TAPE!

The League of Lazarus has introduced Robin to a wide range of some of the youngest, deadliest fighters on the planet—from XXL and his hype squad to Respawn and his Deathstroke fandom—and these killers mean business. But no fighter has made an impact on Damian Wayne like Flatline, the former sidekick of Lord Death Man and one of the most elite combatants in the tournament. But who is Flatline? Uncover the secret origin of all the breakout fighter stars of Robin in this oversize special that puts the K.O. in comic book! Plus: Atlantean fighters join the tournament? C’mon, Mother Soul, never order the fish—always order the steak!

It’s Halloween at the Academy! That means homecoming is fast approaching! With the freshmen excited about getting in touch with their spooky sides, the faculty, again, grapples with the scary threat posed by their rogue student, the mysterious Red X. Luckily, this time, the Titans have help from some old friends who have, at long last, come home…

Christopher Chance now has 11 days to solve his own murder. With almost no leads, it would seem the case of his own death has gone cold…but it’s about to get a whole lot colder. Enter Ice, former member of Justice League International, arriving at Chance’s office with some unexpected information…and mysterious intentions.

His first year of being GCPD police commissioner was an intense challenge for James Gordon. He battled corruption in the ranks, his marriage was in shambles, and the vigilante Batman was clearly welcoming new recruits with the appearance of Batgirl. And The Joker picked his moment to unleash hell!

Yara stands alone as her world is torn apart! After an unexpected betrayal that shakes Yara to her very core, she ventures out and finds the lost tribe of the Amazons…the Esquecida! Will a reunion with her lost sisters finally give Yara the answers she’s been looking for? Or is she now more lost than ever, as she ventures out to find those who wish to never be found?

Since her return from the Sphere of the Gods, Diana has tried her best to reconnect with her past and those she left behind. But now the past is coming for her! It all begins when a mysterious man appears, claiming to know the dark history of the Amazons. Could his claims possibly be true? And what does this mean for our hero’s relationship with those who still rule Themyscira? Judgment is coming for all the Amazons, and you won’t want to miss this prologue story leading directly to the next chapter of the Wonder Woman epic!

The wait is over, and the entire story of the Amazons can finally be told! Millennia ago, Queen Hera and the goddesses of the Olympian pantheon grew greatly dissatisfied with their male counterparts…and far from their sight, they put a plan into action. A new society was born, one was never before seen on Earth, capable of wondrous and terrible things…but their existence could not stay secret for long. When a despairing woman named Hippolyta crossed the Amazons’ path, a series of events was set in motion that would lead to an outright war in heaven—and the creation of the Earth’s greatest guardian!

Legendary talents Kelly Sue DeConnick and Phil Jimenez unleash a reading experience the likes of which you’ve never seen, with unbelievably sumptuous art and a story that will haunt you—with subsequent issues featuring art by modern masters Gene Ha and Nicola Scott! One of the most unforgettable DC tales of all time begins here!

Hit us up on Twitter, Facebook, or Instagram. And for more film, gaming, anime, and TV news, trailers, and updates make sure to keep it locked right here at The Nerdy Basement. While you’re here, please consider supporting us on Patreon! It’s an easy way of supporting us so we can keep proving you with your Nerdy News!