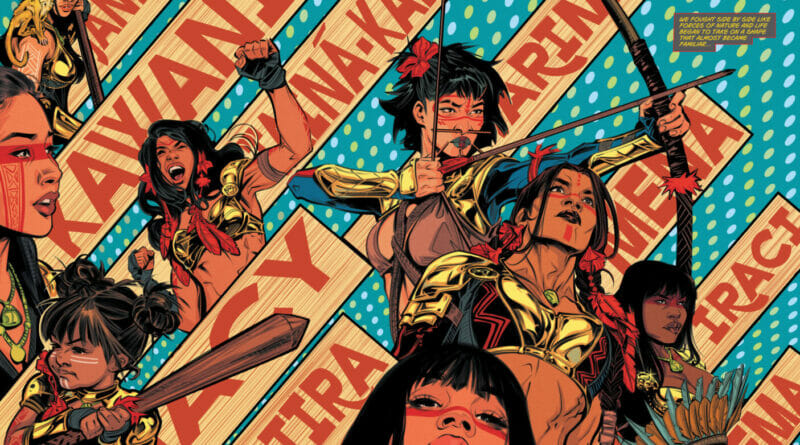 
DC Comics is back for another week of hot releases

This week’s DC Comics highlights include the thrilling finale of the current arc of Detective Comics in Detective Comics #1058. Part 3 of War for Earth-3 in Teen Titans Academy #13, The Trial of the Amazons continues with Joelle Jones’ Trial of the Amazons: Wonder Girl #1, and Tom King intensifies his whodunnit mystery with The Human Target #6. See what else is coming from DC Comics this week below.

REMATCH! Superman puts what he’s learned on Warworld to the test as he faces Mongul’s unstoppable, reanimated warrior known as the Unmade. But it may be too late for Mongul to salvage his empire before an ancient prophecy is fulfilled. One of Superman’s inner circle will fall, another will be resurrected at a terrible cost, and the Authority’s traitor will be revealed in the conclusion to part one of the Warworld Saga!

Aquaman and Green Arrow have restored the timeline! Unfortunately, there is something off about the world they returned to. Scorpio has gone legit and is now one of the most successful and integral tech companies on the planet. Times like these make you remember how your mother always told you to never trust the dinosaur man. Even if he did help you build a time machine that fixed everything!

After the shocking revelation at the end of the last issue, will the new Aquamen partnership be over before it even begins?! With more Atlantean sleepers awaking, the team races to discover what Orm’s role is in the situation…and how long has he been involved?!

Father versus daughter as Slade Wilson’s daughter Ravager guest-stars! Ravager wants to know why Deathstroke has claimed the title of King of the Super-Villains and brings along the mysterious Respawn with her. Past secrets explode with a cliffhanger that leads directly into the Shadow War crossover!

The Tower crashes to a close! In the epic finale to this weekly tale of terror, alliances are forged amongst unlikely allies, and the Bat-Family reassess their strategy in their war on crime in Gotham City. Will Psycho-Pirate be Batman’s newest eyes and ears on the streets? Can Koyuki Nakano ever recover from the traumatic events she witnessed? How much fun will the Batgirls have beating the snot out of Penguin’s goons at a seedy motel? The answers await you and much, much more in this cataclysmic culmination! (Except for the Batgirls, I’ll tell you right now that answer is a lot.)

As if one dramatic conclusion wasn’t enough, the finale of House of Gotham will leave you breathless as Batman is faced with an impossible decision: kill a monster of his own creation…or let others be killed in the process. Save the patient in front of you was the advice from Thomas Wayne…

It’s a whole new year of me, Harley Quinn! I’ve learned the ins and outs of Gotham’s lovely sewage system, and I’ve even made some unexpected friends along the way. I mean, except for one very murderous new vigilante roaming the streets, a new homicide detective convinced I’m the killer, and the acclaimed Spice World (1997) film not being on a single streaming platform.

Other than that…totally fine. Year two starts here with a new arc…brand new characters…and some all-too-familiar faces from my past who maybe aren’t so happy to see me.

Icon and Rocket: Season One #6

With the might of every super-powered rogue the world’s governments could assemble bearing down on them, Icon and Rocket must call on every ally they have to survive…which begs the question: Do they have any allies? This would be a pretty tough way to find out otherwise…

Demon versus detective! The Lazarus Tournament is over, and Damian returns to Gotham a changed hero! But there is one last opponent he might fight to the death…himself. This lead-in issue to the epic Shadow War event is one you dare not miss!

Ten years ago, the Rogues disbanded and went their separate ways. But time hasn’t been kind to the former blue-collar super-criminals. Caught in an endless cycle of prison, rehab, dead-end jobs, broken relationships, probation, and endless restitution fees, the Rogues are sick of paying for their crimes.

Luckily, Captain Cold has a plan. One last job that will leave them all richer than their wildest dreams and free from their past…if they can survive. This is the Rogues as you’ve never seen them before, reimagined by the incredible talents of master storytellers Leomacs (Basketful of Heads) and Joshua Williamson (Batman, The Flash, Infinite Frontier). DC Black Label presents Rogues, a neo-noir heist that will make your blood run cold…

Secret-origin issue, baby! Task Force Z #5 was quite the disaster for Bane and Jason, huh? Let’s give those two a minute to sort out their lives and travel back to the very beginnings of the team: where the black market Lazarus trade has just begun, and Two-Face makes a call that heywaitaminute this is going to inform the current story, isn’t it?

Caught between the Suicide Squad and the Crime Syndicate, the Teen Titans fight to free the missing academy student from Amanda Waller. With time ticking away towards when the Titans must return home or risk being stuck on Earth-3 forever, the team faces an impossible choice.

The most acclaimed book of the year continues! After a tragic confrontation leaves a Justice Leaguer dead, Christopher Chance, the Human Target, is one step closer to solving his own murder…but also one step closer to his own grave. With only six days left, can he find the truth through webs of lies?

Trial of the Amazons: Wonder Girl #1

Trial of the Amazons Part Four! As Diana’s hands become tied from pursuing her investigation, she recruits a former ally to help her cause…Cassie Sandsmark! As Wonder Girl begins to question the Amazons, Yara Flor joins the Contest hoping to reconnect with the memory of her lost mother. Meanwhile, the evils behind Doom’s Doorway grow restless as tensions boil in the world above! INTERLOCKING MAIN COVERS TO COMMEMORATE THIS BIG MOMENT IN WONDER GIRL HISTORY!