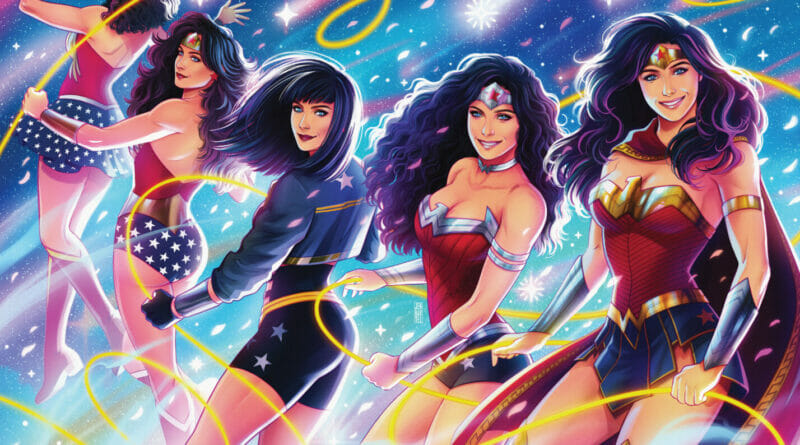 Veronica, the Scientist, has one of the longest-standing connections to Walter among anyone in the House…and through her work with NASA, she may have insight into who he really is. But what she sees in the stars above the House may upend everything she thought she knew!

The Joker Presents: A Puzzlebox #3:

The puzzle gets more complicated…and deadly! The Joker continues storytime with two more terrifying tales of this twisted treasure hunt. First, Black Mask is out for revenge, but when he crosses paths with one of the world’s greatest assassins, things don’t go as planned. Then, Killer Moth must team up with Man-Bat if he hopes to survive the riddle of Master Engine.

After being whisked across the Multiverse, Wonder Woman finds herself trapped on a desolate and barren planet with the last person she’d ever expect to find: DARKSEID! What does the former ruler of Apokolips want with the Amazonian warrior? And what lurks in the shadows of this devasted world?

Arkham City: The Order of the World #1:

The Joker’s attack on Arkham Asylum left the long-standing Gotham establishment in ruin, most of the patients killed or missing, and only a handful of surviving staff—a few nurses, a gravely injured security guard, and one doctor. In the chaos of the assault, it is believed that several of the asylum’s patients escaped and scurried off into the dark nooks and crannies of Gotham City.

Now, these Arkhamites walk among us, and it’s up to the Asylum’s one remaining doctor, Jocasta Joy, to round up her former patients. Meet these Arkhamites: a woman with no face, a pyggy in search of perfection, a man who feels nothing and burns everything, a woman who must devour life to save herself, a man unfit for the waking world who looks instead for Wonderland, a body with more than one soul, a being unbound from time who lives in the present and the past, a boy who seeks the comfort of vermin, and the twisted man who sees them all for who they are.

And witness the avenging angel who stalks them. This fall, join writer Dan Watters and artist Dani on an odyssey through the deepest depths and darkest shadows of Gotham City and find all-new reasons to fear the night.

An old face returns to Gotham when former Mayor Emerson Mayfield steps out of retirement, looking to once again rise to power. But Batman isn’t thrilled with the Mayor’s homecoming after his run-ins with him during his early years as the caped crusader. Can Batman deduce what Mayfield’s plan for Gotham is before it’s too late?!

Batman is racing against time to stop Gotham City from tearing itself apart as the Scarecrow’s long game is revealed. The Dark Knight has bigger problems though, as an insane Peacekeeper-01 is on a murderous rampage through the streets of Gotham! Can Peackeeper-X stop him?! Back-Up: Clownhunter has been doused with Fear Toxin at the hands of the Scarecrow, and he is living out every anxiety, moment of pain, and heartbreak he’s ever had. Will he find his way out and resume his goal of being Gotham’s protector from clowns? Or will he succumb to Scarecrow’s greatest mind game yet?! See the end of this epic story that will change Clownhunter’s trajectory in Gotham City forever!

From the creators of The Last Podcast On The Left, exorcism just got a whole lot easier. After attending a seminar hosted in a hotel conference room by a mysterious group called the Soul Plumbers, Edgar Wiggins, disgraced former seminary school student, discovers what he thinks is the secret to delivering souls from the thrall of Satan. But after stealing the blueprints and building the machine himself, out of whatever he can afford from his salary as a gas station attendant, Edgar misses the demon and instead pulls out an inter-dimensional alien with dire consequences for all of mankind.

A terrifying reunion! With Levi making his choice, the new avatar of the Green draws one step closer to escaping the clutches of the Suicide Squad! But is it already too late? Has the Squad bolstered themselves to an unstoppable end? Or will an unexpected guest help him to victory at a terrible cost?

Put on your tiaras and prepare your indestructible bracelets! DC is inviting you to join us for a one-of-a-kind special showcasing Wonder Woman’s past, present, and future to celebrate the legacy she has created and those she will continue to inspire with her adventures for years to come. This oversize super spectacular features work from some of the very best in the comic industry along with bright young stars ready to share the spotlight with Diana. You won’t want to miss these new stories that capture timeless messages of hope and empowerment presented together in this gorgeous keepsake issue!

The hunt is on! Lobo left a trail of destruction across the galaxy that’s…honestly pretty easy to follow. But even though Crush thinks she’s seen it all (Murder! Mayhem! Intergalactic highway robbery!), nothing can prepare her for what she finds when her father’s trail goes cold…

Are You Afraid of Darkseid? #1:

Gather ’round the fire, fellow campers, because it’s time for that most terrifying of traditions—campfire stories so scary you’ll never sleep without a night-light again! The Teen Titans guide those brave enough through tales of Batman and the hidden killer, Superman and Lois Lane and the killer in their back seat, Harley Quinn and Darkseid versus a furious Bloody Mary, and four more stories so hair-raising you’ll call your momma to come pick you up. So toast your marshmallows, pull up a s’more, and answer the only question that matters this Halloween: Are you afraid of Darkseid?

The fear-soaked finale! Manipulated by the Occultist, Jessica has done the unthinkable and murdered her best friend, but her torments are far from over. Then, in our final terrifying trip into the haunted artifact room, Domo Stanton tells the heart-stopping tale of the Occultist’s Chalice!