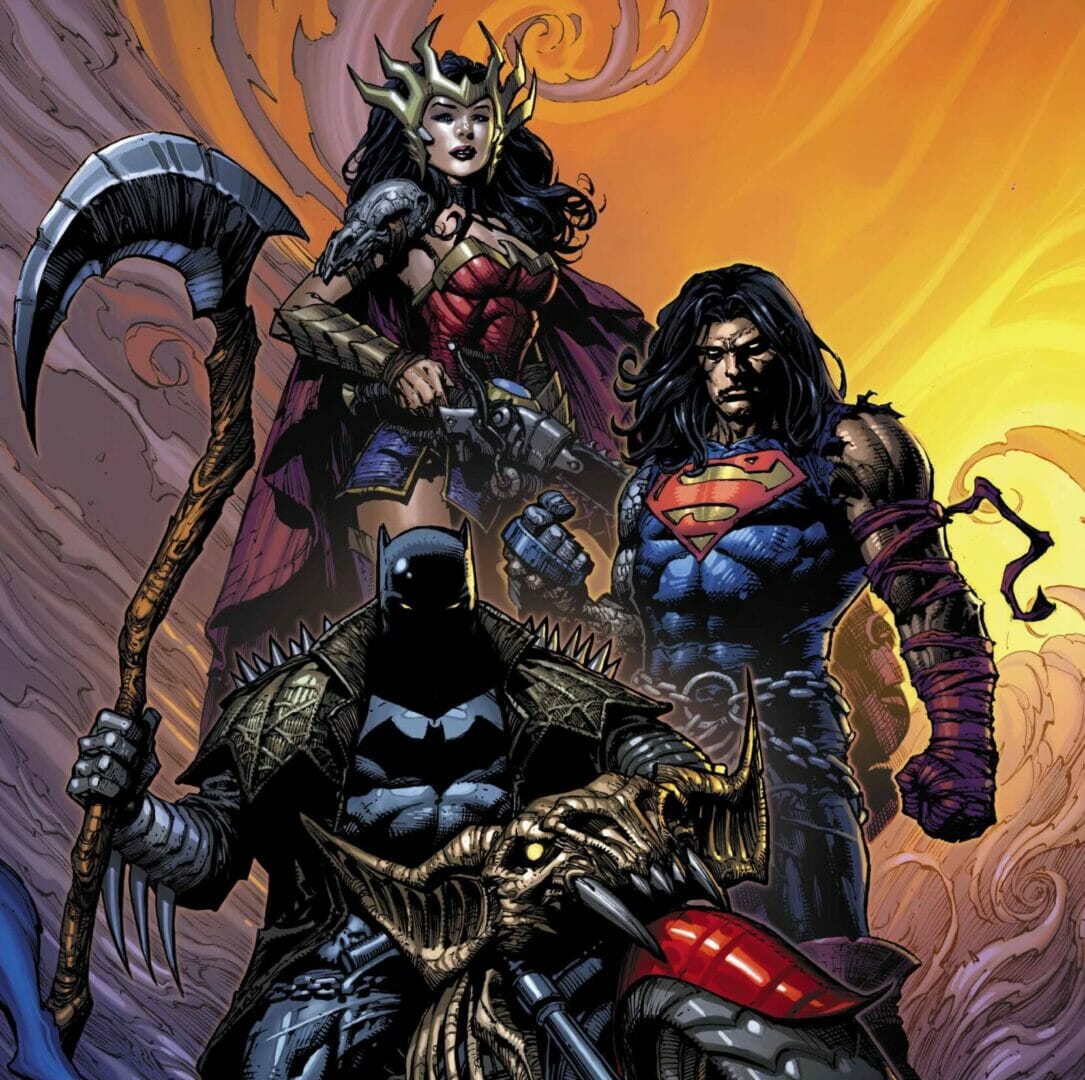 
DEATH METAL, CAN OUR HEROES SAVE THE MULTIVERSE AND HARNESS THE CRISIS ENERGY!

It’s been 3 years since Scott Snyder and Greg Capullo gave us Dark Nights Metal since then we got a bunch of follow up stories and events such as Justice League: No Justice, a 30+ issue Justice League Arc, DC Year of the Villain, The Batman who Laughs mini-series, Batman/Superman series, and finally Hell Arisen. All that build-up has finally led us here to the climactic crescendo where all the events that have been lined up will be blown away in an epic “Guitar Solo” sequel of an event!!

There is so much to unpack in this major event sequel so let’s get started. This story is very confusing if you haven’t been keeping up with everything DC Comics currently and honestly, even if you are caught up this issue will leave you wondering how you got here. This issue is not a good jumping on point but if you’re just looking for an awesome story with some badass artwork then this might just be the story for you.

There was a ton of connective tissue with this story that references events that have led up to this point so if you haven’t read that yet you will be lost. However, the story does its best to explain and get you caught up. There is a lot of amazing easter eggs and awesome artwork to be enjoyed so worry not, Death Metal is worth the price for Artwork and easter eggs alone.

Sergeant Rock starts this issue off with a hell of a motivational speech but we don’t yet see who he is talking too. Elsewhere we find that Batman Who Laughs has taken over the Multiverse and Perpetua has won the War. The Batman Who Laughs has taken up residence on The Hellscape, a dystopian version of Earth modeled in the visage of the main antagonists himself and master Perpetua. Our heroes have not only been beaten but some have been forced into the service of the villains on the promise that their loved ones will be spared.

Batman Who Laughs has constructed a Justice League of his own using our beaten heroes, Wonder Woman is Queen of the Underworld where all the main villains of the regular DCU are locked up, Harley Quinn is Hunter of the Wastelands, Aquaman is Commander of the Black Fleet and Mister Miracle is Guardian of New Apokolips.

The Justice League meeting gets crashed and we get to see one of the most Death Metal versions of our Batman, I call this one Black Ring Batman!! As the name suggests Batman is wielding the Black Ring of Death and raises an army of zombies to attack. Batman communicates a plan to Diana telepathically, the plan is to save what we can and survive however Diana won’t settle for anything less than saving everything. Batman retreats in the mayhem and lives to fight another day.

Diana returns to her Underworld and secretly meets with a high profile prisoner that just arrived and here is where we finally see what became of Wally West after the events of Flash Forward. Wally explains the Crisis energies and how that affected the current state of the DC Universe, he also slightly clears up the picture of what happened and how we got to this point. Batman who Laughs figured Diana would speak to Wally and walks in on their conversation, he makes empty promises and veiled threats to which Diana answers with one of the coolest splash pages in this issue!! Diana kills Batman who Laughs with a FREAKING INVISIBLE CHAINSAW!!!

Death Metal #1 ends with a cliche as in true Batman fashion, Batman who Laughs had a contingency plan, “The Final Bruce Wayne” who appears in silhouette and looks like Dr. Manhattan.

Death Metal has so many awesome depictions of different Batman, we get Magic Batman aka Bat-Mage, Elongated Batman, Etrigan Batman, Darkseid Batman, B. Rex aka Tyranasaurous Batman, Clayface Batman and so on and so on… So many Batmen everywhere lol ?

We have so many questions that need to be answered in Death Metal! We saw Lobo is on a side quest, doing god knows what, but it seems like Snyder is setting him up to have a big role. We still don’t know where Bruce is and what his overall plans are but we know that Sergeant Rock is involved somehow. We don’t know what the deal is with Superman except for the fact that he is succumbing to the Anti-life equation. There are so many questions and I can’t wait to get those answers!