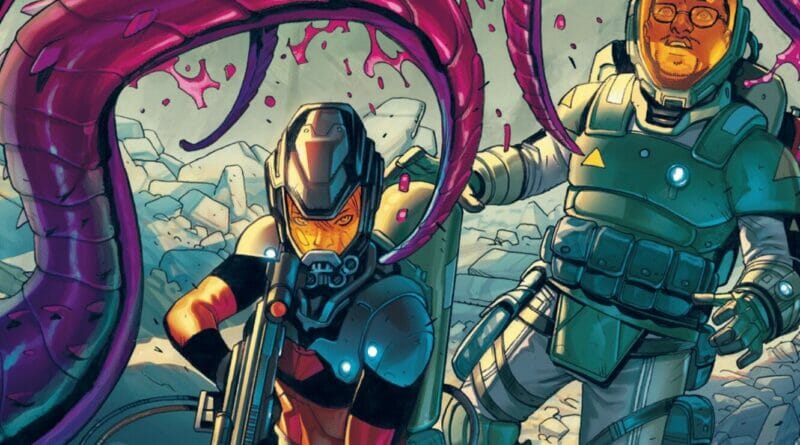 
Deep Beyond #2 Dials It Back a Bit To Introduce New Characters While Serving an Uneventful, Near Meaningless Death

Mirka Andolfo and David Goy are back again with Deep Beyond #2 and after a hard-hitting debut issue last month that set the tone and what many readers can expect from this series going forward. Deep Beyond #2 dials it back a bit to introduce a new batch of characters while serving an uneventful death that holds little to no weight.

Deep Beyond #2 picks up immediately where Deep Beyond #1 left off with Jolene and Paul being attacked by a sea monster. With the help of Lucas (L), Mari (M), and Nat (N). Jolene and Paul were able to escape the sea monster safely to a substation known as “The Docks”. Here we are introduced to Omeir, who as he proclaims is essentially the mother hen of this substation as he tends to the needs of the crew.

There’s still some mystery surrounding Jolene’s sister, Pam’s wife, Eve who seems to be keeping some sort of secret in regards to the anomaly which if you remember back from Deep Beyond #1, has Pam trapped in her submarine. While nothing is fully explained, granted it is only the second issue of this story, we are starting to set things in motion for what’s to come later on in the story. More so with the team who were just caught by Eve trying to use a submarine to search for Pam.

And as I mentioned above, the uneventful death of Omeir, which sadly wasn’t at all impactful and falls a bit flat because we just met the character and he meets his end in the very same issue. Felt a bit forced to have a character die in this issue since the threat levels weren’t necessarily that high. Feels like they needed a character to die for the hell of it.

How Omeir’s death comes into play later remains to be seen. I’m just hoping it’s not a throwaway death. Even if we briefly met the character his death should have some sort of impact on the group itself. Especially when tensions have risen between Jolene and Paul in regards to her sister Pam.

Andrea Broccardo’s art hasn’t disappointed yet. From the design of the sea monster to the way the action pieces were illustrated it all flowed extremely well and provided the visuals we needed in order to really feel how threatening these anomalies can actually be.

Deep Beyond #2 for the most part is just ok and that comes at the expense of introducing a new group of characters in the quickest way possible. As of right now, the only person I truly care for is Paul, Jolene, and Pam; and of course, Eve since she’s married to Pam and has some sort of ulterior motive that she is keeping secret.