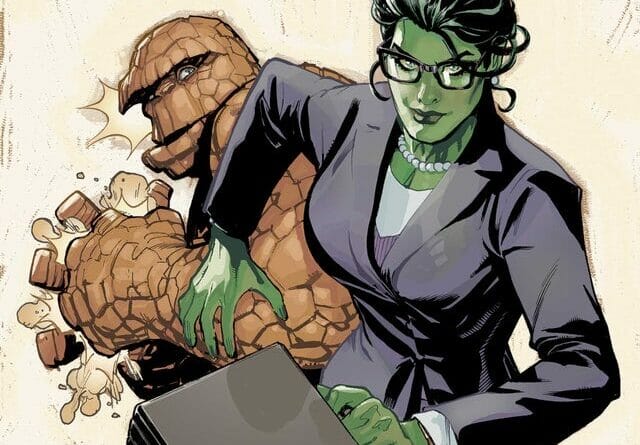 
Who will win custody of Bentley Wittman?

The story starts off with the Fantastic Four family enjoying video games together. They are interrupted by a pizza delivery guy wearing a disguise, in an attempt to get inside the building. The person who turns out to be breaking into their home is The Wizard. He has come to take his young clone Bentley-23, back into his care. Reed Richards, Sue Storm, and Dragon Man start to attack him only to have him slip from their grasp. They suddenly stop when Wizard shows them that he has legal court papers to take them to trial for custody of Bentley.

The story cuts to Jennifer Walters (AKA She-Hulk) as she lifts a car that was about to hit a little boy head-on. She gets a signal from the Fantastic Four tower calling for her help. She quickly changes her clothes to her lawyer outfit saying that this is a job for Jennifer Walters, attorney at law! Her personality already shines in this comic. Sometimes she isn’t written well so I really liked her introduction here. She meets them at the courthouse telling them that she is confident she can win this case because no supervillain should have custody of their kids.

The Wizard shows up to see them as well and greets everyone there with a smart-aleck comment. Sue, Richards, Thing, and Dragon Man get irritated by him. She-hulk warns them that they have to be on their best behavior. Their judge is Judge Payne who is a no-nonsense superhuman who does not tolerate disruptions in her court. The court is in session moments later and the battle for custody begins.

Jennifer Walter’s opening statement is that The Wizard is an active criminal and is therefore unfit to be a child’s guardian. He argues that he has been a citizen for many years and the culprit of the crimes is a clone of him. An imposter. He even says he will take an identity scan to prove he is the real Wizard given to him by Reed Richards.

The results of the test end up proving that what he is saying is true. Reed Richards confirms who they were fighting was a clone. The Wizards uses this to state that he needs custody of Bentley-23 because without guidance clones can go rogue. How he can’t have a thing not even human-like Dragon Man raise him. He says Dragon Man is a simulation that mimics human behavior. He brings the villain Diablo to the stand as evidence of his claims. The fantastic four see him and immediately start attacking. She-Hulk tries to stop them.

The judge stops everyone and tells Jennifer Walters to calm her clients or there will be consequences. Once it settles down Diablo tells the judge that he made Dragon Man and that he gave him a soul. He said with a flick he can undo it and turn him into a soulless monster. Dragon Man gets scared and the witness is called away. The Wizard then goes on to give a list of all the times Dragon Man put his clone in danger under his custody. Sue and Reed Richards then announce that they can take guardianship of young Bentley.

The Wizard laughs at this telling them that they can’t even take care of their own kids. How one of their kids is even in therapy from their mistakes. The Thing then states that he can take custody of the child but is shot down by Wizard stating that one of his kids in his care recently killed four alien visitors in the streets. He says he should lose his own kids permanently. This enrages him and he lunges for The Wizard. Reed flings himself around him trying to hold him back. The judge gets furious and brings them to a halt with her powers. She says she is debating on whether any of them is fit to be parents.

The art by Francesco Manna is fantastic. His art especially shines when it comes to action. Especially when showcasing Reed Richards’ powers. The fight scenes with everyone fighting together are also really well done. I really love how he draws She-Hulk. Lately, her design has been rather ugly looking so I am happy to see the confident, muscle-ly superhero I know and love. The attention to detail in this comic is also steller. The backgrounds are interesting to look at as well.

As for the writing by Dan Slott, I really liked his characterization in this. No character seems written badly or strange. The dialogue is one of the standouts for me. Especially when the court is in session. The whole scene feels like a real custody battle. Both sides bring up good points.

I do think it was weird just how good The Wizard was doing though. He was representing himself and kept one-upping Jennifer Walters who is an actual lawyer. She was so well written though I can easily overlook that. I really like the family dynamic he writes for the Fantastic Four. You can tell they all love each other which is really heart-warming to read about. Overall this was a fun comic to read.