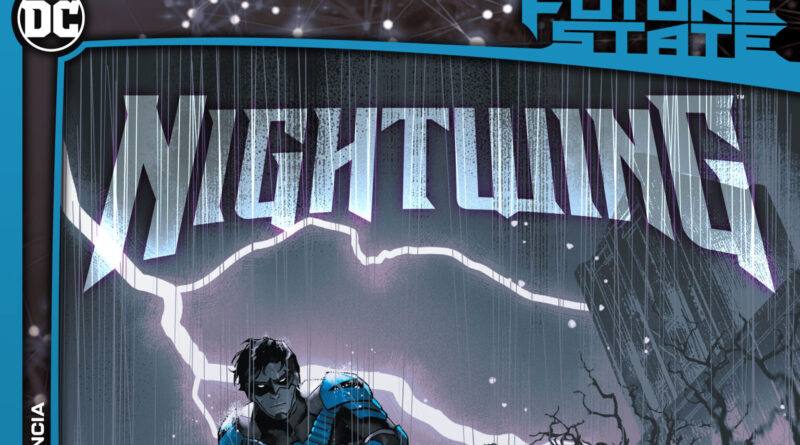 
Nightwing is broken after the loss of his mentor Batman. And the Magistrate can see the cracks

Gotham has done no favors for the Bat-Family since the loss of the Dark Knight, especially Nightwing. Leader of the Resistance we learn a bit more of how the rest of the family is fairing with the Magistrates new shoot on sight orders on all vigilantes. Nightwing is on top of the wanted list being the first of the Bat-Legacy and continuing the crusade his mentor started long ago.

Future State Nightwing shows us a grittier Dick Grayson one put through scenario’s bringing him closer to the mindset Bruce had when dealing with many scenarios. The fun-loving, wise-cracking hero is now colder and much more brutal. The book shows us more moments of Dick being on a completely different mindset. I loved the very first panels, while he would typically be more trusting of citizens in need of saving, he sees through the ruse and quickly puts down the soldiers in his way. And sends a message he is not playing the same games he used to, even a sniper points out Nightwing has changed since the “death” of Batman.

We eventually see that he has been coordinating the Resistance alone in Arkham Asylum (Callback to Tim Drake mentioning this in Robin Eternal). While we see a few recognizable faces on screen we can see that its not just the normal crew but some additions like Two Face, Manbat, Talia Al’Ghul (guess), Batgirl with some of the other birds of prey. We can see the self-isolation is not doing well for our Nightwing trying to hold it all together, and this is till he is visited by our New Batman!

After some insight that the new Batman wants to join the resistance and an impressive exchange between the two vigilantes, we learn that Nightwing has had enough of being the hunted and lead the Magistrates forces to his HQ. Now the duo will have to work together to survive this attack.

In plain and simple terms, I LOVE THIS lol. Dick Grayson has always been in my top 10 of my favorite characters but I always felt his easy-going nature would be his untimely end. But this showed me though out of character he can definitely dish out some good old pain and punishment, while still looking badass. Future State has been pushing most of our heroes to the brink. And it made for some exciting stories. Now depending on if this title is a prequel to his status in FS: Teen Titans it can explain his demeanor much more. But we will have to find that out later.

Let us know what you thought of the issue and if you like this grittier Nightwing. As always Stay Nerdy My Friends.