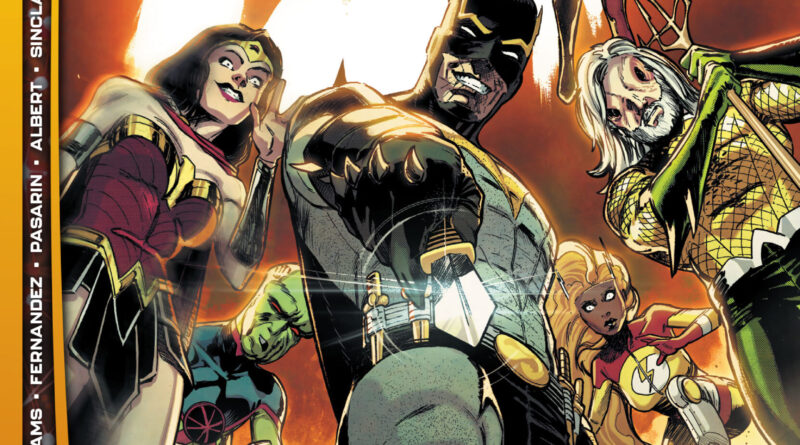 
Just when you thought Future State couldn’t get any better, it came out with another set of amazing stories!

This story was bananas! Future State has now shown us the vastness of these tales. Were thrown into a chase right away of “villains” by the new superhero team called the Justice Squad! But things aren’t what they seemed, yes the Justice Squad has the lineup you would expect. Batman, Wonder Woman, Aquaman, Martian Manhunter, The Flash, and Superman. Just not the ones we remember.

The narration begins by pointing out that this squad are actually criminals dressed as the heroes of Earth. And as they hunt the likes of Mongal, Braniac, and Sinestro we notice this is not a team brought together to fight injustice. They are actually a Suicide Squad run by Amanda Waller.

This is where some of the fun parts come up. After easily defeating the trio (by killing them) the majority of this Justice Squad was brought together for pretty much similar reasons other villains under Waller did it, to survive. But what would the world need with a JL that kills, short answer they dont. This is Earth 3 and Waller has a plan to save this Earth.

She brought over Conner Kent previously Superboy now her Superman to help further the initiative. They already killed the Crime Syndicate and seem to have brought the remainder of few good people of the earth to a standstill as well. The plot thickens just moments later after we see Amanda Waller’s original earth’s Suicide Squad is on the hunt for her as well. Something happened with Waller as she fled her home universe.

What it was I’m sure we will find out in the next issue. But with the likes of the PeaceKeeper leading a team of stone-cold killers, I’m sure things are far from done. This story was great showing us its spans the multiverse is just icing on the cake. Poor Conner is being manipulated but who knows how he will fare at the end of this.

Now the side story of Black Adam kicked this book into overdrive. As I was mentioning the Future State is spanning multiverses, this tale spans time. We come to the 835th Century to some recognizable faces of the far future. The DC One Million Justice League, Some of the coolest characters ever made by DC in my opinion. But this story isn’t just about them, by this point of the future magic, has been nonexistent for centuries.

And it has returned with a vengeance the Unkindness has returned with magic users like Vandall Savage, Dove, Teekl, The Child, and the Seven Deadly Sins. To say the least, they wiped the floor with their strongest hero Kal-El One Billion (literally a living star with a GL ring. Holy crap). The Justice League knows they wouldn’t be much of a match for them so they turn to the only living being that may stand a chance against them, Tenth Adam AKA Black Adam.

We learn that he has chosen a life of peace and without magic, and on his new Khandaq he sits only as an advisor, not a ruler. He is well past his fighting days. As the JL looks to him for guidance he himself believes this is the end of all things, as it looks to be the case while the Sins corrupt the other leaguers.

Though Wrath ends up helping Adam to a point that he spoke his magic word and becomes Black Adam once again, he still believes they have no chance of survival. Until Wonder Woman mentions she’s pregnant by Adam. So now the fight in him has returned and a counter-attack is on its way, but how can just Black Adam alone defeat this evil. To say the least its another awesome issue, seeing these heroes and villains of the future makes things interesting. Can’t wait for the next part of this story. – Ed

Really enjoyed seeing Brian Michael Bendis continue his Legion run with this title. If you haven’t read issue 12 I won’t spoil anything but things are left open-ended. And this Future State story shows us many years later that the Legion is in ruins. Element Lad apparently goes crazy and is the cause for multiple planet’s destruction. Due to the rising of more beings with elemental powers.

After having to disband, most of the legion members are scattered and angry at the betrayal of their teammate. Some are on the hunt for him, and the rest feel its time to bring the legion back together. Some of the highpoints of the issue end up being the appearance of the team. Like Saturn Girl is now using a mechanical arm most likely due to the attack they all endured.

Besides the new appearances of the members and multiple questions you will likely have about what happened. Its a fun story; i always enjoy seeing heroes after a point of suffering come back to still hold true to their beliefs. Now heres hoping issue 2 holds up the momentum that was built up to. – Ed

In this Future State title Bruce Wayne is a dead man and he’s on a mission to find out why Peace Keeper 01 killed him and why he thinks that Wayne and Batman are dead. Written by Mariko Tamaki with Art by Dan Mora this issue does a pretty decent job of balancing the backstory of how did Bruce Wayne “die” and how he is now staying off the radar to continue his war on crime and possibly avenge his murder.

If it’s not clear to you yet Bruce Wayne isn’t dead but as we know from issue #1 he was shot by Peace Keeper 01. we see how Bruce survived and why Peace Keeper 01 thinks he’s dead. However the explanation they give is flimsy, Bruce Wayne gets shot and falls in what looks like Gotham Harbor. There happens to be a dead body already in the water, that body happens to look enough like Bruce Wayne that Peace Keeper 01 thinks, Mission Accomplished! That’s very farfetched but I’ll play along, for now. We also get introduced to Bruce’s new roommate, a conspiracy nut job named Noah who we see accentuate every conspiracy stereotype perfectly. This might prove to be interesting later on.

Aside from the small misstep of Bruce’s dead body this issue moves along really nicely. We see that although Bruce has been reduced to his most basic version of Batman he hasn’t lost his tenacity and skill, if anything he has refined and sharpened his skills to the point he can fight machines barehanded. Alone with no support system, no partner to watch his back, and limited technology… This is one of the most interesting takes we’ve seen on Batman in quite some time and we are all here for it!