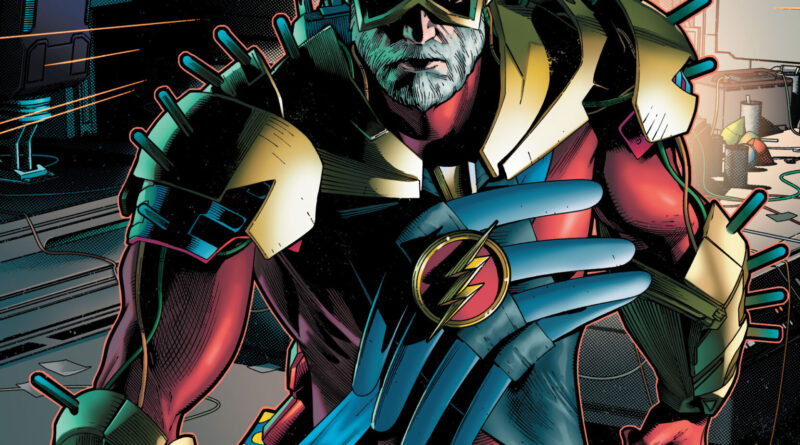 The last time we left our heroes Barry had come to the painful conclusion that Wally had to be stopped “For Good” aka “Forever”. Honestly, this whole Flash series does its best to portray the darkest timeline that really doesn’t make much sense. In the span of 2 months, in the story, Barry has gone from his natural Blondish hair color to complete white hair, everyone in the Flash Family is gone and the story hints at something happening with the Justice League but that also doesn’t get explained in this story, all we know is Barry is completely alone.

Future State: Flash writer Brandon Vietti does his best to make this story compelling and does a pretty decent job and that is helped by the amazing visuals of artists Brandon Peterson and Will Conrad. The pacing is actually better in the story than it was in Future State Flash issue 1 but that is due in large part to the story focusing only on Barry and Wally. Unfortunately, if you care about what happened to any of the remaining family members you will be disappointed as they are barely mentioned if at all in this issue.

Having finished the weapons he was developing to combat the twisted possessed version of Wally, Barry heads off into battle. The artwork in the fight scene panels is next level amazing and that definitely brings the stock of this issue up a notch, tie that in with the psychology that Vietti has written into the fight scenes and you have yourself a good book.

The finish of this Future State book is what really kills it for me as a reader, and not in a good way, unfortunately. Barry Allen has come up with a counter to pretty much every scenario Famine Wally throws at him and when Barry finally puts Wally down Famine starts monologuing. This is where we learn what Wally was trying to say in issue 1, “Famine feeds on…Hope”. Famine is intoxicated by Barry’s hope of saving Wally and with Wally’s body basically decomposing, thanks to a modification made to Captain Cold’s gun, Barry finally feels like he’s won… Barry can now grieve. WRONG!

Future State: Flash issue 2 ends with Famine re-energizing and healing Wally’s body back to full health and merging with him once more. Wally then pushes Barry’s body a moment outside of time making him the equivalent of a Force Ghost, never again able to intervene but eternally forced to watch, suffer and hope that one day someone will be able to stop Wally and save what’s left of the world.

Future State: Flash isn’t an inherently bad series, in all honesty, if you consider it a self-contained series and extend it from 2 issues to 5 issues it would make one heck of a story! Where this series falls a bit flat for me is that it feels both rushed and underdeveloped. We fall right smack in the middle of a world where we don’t know what all has transpired, all we know is our speedsters have no speed, and Wally is possessed. How did the villains get here, how did they infect Wally, where are all the other heroes?

The series ends before there is a conclusion and although I am aware that the story kind of continues in Teen Titans this being the end of the Flash “portion” of the story and us as readers still having so many questions unanswered really does this series a disservice. I don’t believe this to be the fault of the creative team, maybe it’s a casualty of poor planning or a rushed refresh/reboot of the brand I really don’t know but “Future State: Flash” suffered from whatever that hiccup might have been.

For more comic book news and reviews make sure to keep it locked right here at The Nerdy Basement. While you’re here, consider supporting us on Patreon. It’s a simple way of supporting us so we can keep providing you with your Nerdy News!