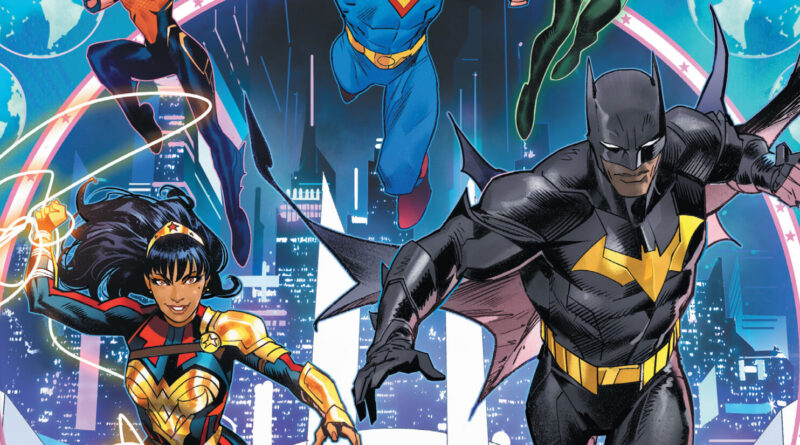 Find out how we have got here to (Future State) by reading Dark Nights: Death Metal issue 7 or click here to check out our review.

Future State: Justice League was written by Joshua Williamson with art by Robson Rocha and together they introduced the new Justice League, and the new Legion of Doom rosters. The story was extremely well-paced and gave adequate panel time to all the characters which was a fantastic way to display their motivations and roles in this story going forward. This story bases on the new Justice League Charter (Set of rules); the new rules state that secret identities and fraternization amongst Justice League Members are now prohibited along with no sharing of their personal lives.

While vaguely explaining why there was a need for the new set of rules placed upon by their predecessors. What can be determined is a betrayal during the tenor of the original Justice League resulted in secrets being leaked and members being “hurt”. The story also did a great job of keeping the true villains’ secrets until the end and the cliffhanger ending leaves us wondering where we could possibly go from here. Overall Future State: Justice League was a great first issue and one of the best coming out of Future State.

The members of this Justice League include Jon Kent (Superman), Yara Flor (Wonder Woman), Tim Fox (Batman), Andy Curry (Aquawoman), Sojourner “Jo” Mullein (Green Lantern), and Jess Chambers (The Flash). This issue opens with some of the battles that the new League has faced so far along with a very brief description of what each character has achieved; such as the New Batman doing what his predecessor couldn’t… finally saving Gotham!! This issue also gives you a brief description of the Legion of Doom which is fitting since they’re only around very briefly before they die, yup the Legion of Doom dies in this issue and not only that but they die in the original Justice League Headquarters!!

The members of the Justice League are kind of breaking their own rules as Aquawoman and Flash seem to be really close and Superman and Wonder Woman are also close, the only ones seemingly following the rules are Batman and Green Lantern. After investigating the crime scene GL figures out who killed the Legion but before she could inform the rest of the League they were attacked by the true villains and sent to a hellish dimension. In the end, you see that the group the Legion unleashed is The Hyperclan, a group of White Martians, and they will now be the Justice League!

Now you know everything that has happened in Future State: Justice League 😊

Future State: Justice League Dark Written by Ram V and art by Marcio Takara was another awesome story with amazing artwork. This story could have been a book all it’s own instead of being a backup. The premise of this issue is Magic and its users are under attack by Merlin and his Hunters. We find out Merlin the Magician had returned, put a spell on the world, and started to hoard magic. Much like the Justice League, the Justice League Dark resisted, fought back, and were betrayed so now most magic users are in hiding trying to stay one step ahead of Merlin and his Hunters because if they are caught they will be interrogated, tortured, and killed as Merlin is in search of Doctor Fate’s Helmet of Nabu.

The main protagonists in this story are Zatanna and Detective Chimp and they are traversing the land following behind Merlin’s hunters to see what they’re after. Along the way, the duo grows into a trio and then becomes a straight-up team joining forces with the “Resistance” of Constantine, Madame Xanadu, and a super-secret heavy hitter! This was a really good story and I’m very intrigued to see where they go from here and if the heroes come out on top in this Future Story.

We start with Zatanna and Detective Chimp who are standing in the middle of where a massacre has taken place. Magic users are being hunted down, interrogated, and burned at the stake. (Reminiscent of the Salem witch trials right? Stay with me the story stays this awesome!) Anyway, we find out that Jason Blood is dead but the Demon Etrigan is now merged with a different soul, the soul of a Simian… Detective Chimp!!

Looking over the massacre they find a magical trinket and it leads them to Rory aka Ragman, upon finding him they are then led to Las Vegas, narrowly escaping Merlin’s Hunters and his Knight! In Vegas the heroes meet up with Constantine and Madame Xanadu who are protecting an unknown blind man who we later learn is actually Doctor Fate! The issue ends with Merlin and his Knight preparing for their final battle as they ready to claim the final magic artifact The Helmet of Nabu.

For more comic news and reviews make sure to keep it locked right here at The Nerdy Basement. And while you’re here, consider supporting us on Patreon. It’s a simple way of supporting us so we can keep on providing you with your Nerdy News!