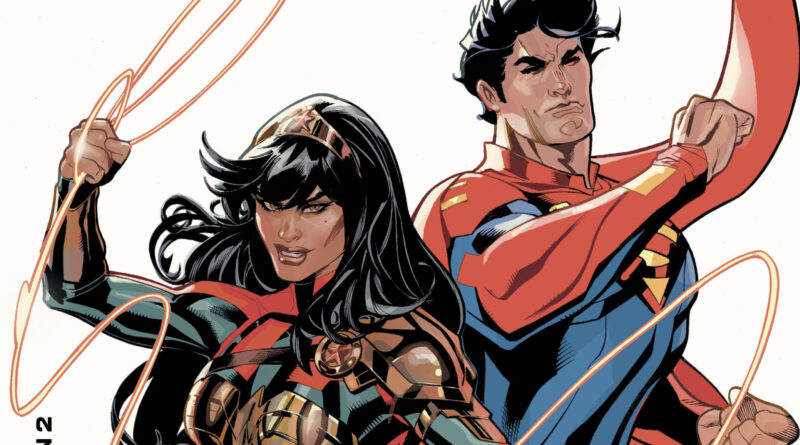 Issue 1 left us with Jon falling from the sky in his beloved city of Metropolis. Solaris and the red sun radiation it emits proved to do more damage to our new Superman than even he realized. Luckily Wonder Woman Yara Flor was near to witness the trouble. She takes him to the Fortress of Solitude to recuperate, to be awoken by Yara later on when their individual challenges were set to meet. After some discussion, they realize they cannot succeed alone and they see to a plan that will allow them both to succeed.

The story finishes off very well, these are not the world ending tales we could expect from this duo but a story that shows their strength when they stand together. Yara was hesitant to be a part of any greater team (Justice League) and Jon was still learning he didn’t need to constantly put the entire world on his shoulders. The duo leans on each other to get the job done in ways they wouldn’t.

Which then gives us the fun stuff, Yara uses a tool she just witness Superman use to save another planet from a black hole to defeat Solaris. While Superman uses his wits to play out the long game until his own strength returns and he could defeat god at his race.

Overall this duo makes for a fun combo. They do their predecessors proud in this issue and I would love to see them in more adventures down the road. – Ed

I cried I laughed, I celebrated this awesome Green Lantern story! If your reading this now then you definitely read FS Green Lantern issue 1. So you must know our heroes are ringless and fighting for not just their lives but for an entire planet’s worth of innocent people. Jon Stewart is just holding on long enough to get the most amount of people to safety and when you begin opening the panels with images of G’Nort and Salaak K.I.A you can’t help but worry about their chances. :,(

This story continues giving us their best. John making his last stand as well as the remainder of his squad doing what they could to prolong the chance of some semblance of victory. But their sacrifices were not in vain, there was a plan in motion from the start, not just the evacuation but an opportunity to shift the balance of the entire war. John Stewart knew what had to be done and was willing to risk it all to win.

I”ll let you all read the main details but its phenomenal. John said exactly why i love the GL stories, its not about the ring its about the one wearing it.

Now the corps is huge and plenty of other lanterns to talk about and one of the newest makes an appearance. Keli Quintela “Teen Lantern”. This was a sweet story as well, though she is not an official lantern her gauntlet hacks energy off the green battery in ways no one can explain. So the Guardians send her off with Mogo to meet a lantern on the other side of the galaxy and this is our first name drop of Lantern Jo Mullein of the Far Sector title!! But like all the other lanterns their stopped midway after the battery disconnects from them all.

But Keli still has some juice and after a scare from some unknown alien night creatures, she’s able to get Mogo up again but they are stuck in place. Hopefully shes saved in a future title but were going to have to find out about that later.

The final tale of this Future State book shows us none other then Hal Jordan. He was stuck on Earth at the time the battery died out, and instead of kicking back and retiring with the help of Cyborg he’s able to get the ring working to a point it can power a ship to get him to the planet OA.

What we gain from his journey is the precursors to a bunch of the other stories we just witnessed. The bloodthirsty Khund that John fought, the Sinestro Corps that Jessica ran into, and even the War World that Superman is stuck on. Hal desperately sees the crisis at hand throughout space. And by the time he gets to OA, it’s already too late the world is a wasteland.

Here’s the silver lining though, Lantern Mullein makes her appearance!!! This is awesome stuff everyone, the Far Sector title she headlines is amazing highly recommended. But what makes this even better we now see how she begins her quest to revitalizing the Green Lantern Corps as we read in the Justice League title. This one appearance made the book even that more amazing. – Ed

Standing applause for this great work! Our Tim Drake came back to save his family and that’s exactly what he does. The Lazurus Resin brought our hero back from death but not without its side effects good and bad. Tim quickly feels his strength has grown tenfold after literally ripping off a Cybers head with nothing less then his bare hands. Soon after easily handles a squad of about 30 soldiers. The resin not only brings him back to life but also gives them an edge in this suicide mission.

Now if you remember the Lazurus Pits water tends to drive many mad after prolonged use. Especially after awakening from it like Jason Todd experienced. While Tim, for the most part, is in control he begins to feel his mind slip and that’s when Spoiler begins to notice. She knows they have to get it to leave his system somehow but the data shows nothing but potential death for any organics who use the resin. They continue the mission while Tim still seems to be slipping, and by the time that we see him getting past the mind effects of the resin; Spoiler is captured which we know from the side story she is in deep cover at Blackgate.

Though this is happening Tim continues the mission and miraculously escapes death once more. Such a great issue, from touching on all the best things about Tim Drake while still connecting the larger stories together easily. Plenty of action and suspense to make even casual readers a fan. Future State Gotham has been an exciting ride thus far. – Ed

Following the events of issue one we currently find that the Hyperclan is masquerading as the Justice League in an effort to gain the trust of humanity and exact their revenge, the enslavement of mankind. This is exactly the story I wanted to read after the set-up that writer Joshua Williamson gave us with issue #1. The narrative in this issue flowed seamlessly as the characters got a chance to develop their personalities and build on their relationships. This issue answered most of the questions that it had set up in part 1 and nailed the ending leaving it wide open for a follow-up series.

We find our heroes, the true Justice League, on the same hellish landscape that the Hyperclan had lived through during their punishment. Their rules now betray them as they don’t know how to distinguish friend from foe, anyone of them could be a white Martian in disguise. Years of working side by side but never getting to know each other has proven to be a hindrance in this situation.

This mini-series, if you can call it that, established the individual attributes that makes each hero worthy of being a member of the Justice League and with only 2 issues that was no small feat. The artwork by Robson Rocha was spectacular, the way he was able to demonstrate the different emotions and detail the big fight scenes made him the right artist for the job!

In the end it was both the things they knew about each other as well as the things they didn’t that allowed the Justice League to take down the Hyperclan. As I stated above the issue left enough room for the story to be expanded if DC chooses to make this one of their series going forward. Once the Hyperclan was defeated the League came to the conclusion that they needed to do away with the old ways and perhaps set things up in a way that works for them, including opening up slots for potential new members. This was a really fun 2 issue series and I would not be opposed to Williamson and DC continuing this coming out of Infinite Frontier.

This is the Justice League Dark story that I’ve been looking for, they could probably build a whole Magic Crisis around this tale 😅  I jest, but seriously this story is awesome!! Merlin has taken over Magic and thrown the world of sorcery into chaos and despair. Our Mystic heroes have been beaten and downtrodden with little to no hope of overcoming their adversary and his forces.

This is the type of story that holds and captivates you especially if you are a fan of the more magic based (Vertigo) section of the DC Universe. The artwork in this issue is once again phenomenal, maybe it’s just because I like to see dragons and hell fire in my books but I think this story will suffer dramatically without Marcio Takara’s work

In the previous Future State: Justice League Dark issue it was revealed that Doctor Fate (Khalid) had been in hiding, he put a spell on himself that would only allow him to be revealed when the time was right. Now with Doctor Fate once again in the land of the living he is target number 1 and Merlin is on his way.

The best thing about this issue is how it deals with Etrigan and his emotions, yea I know he’s a demon but hey they can have emotions too. With Detective Chimp tethered to him they are able to have a chat in the mindscape and that is where we learn the effect that Jason Blood had on his other half. Etrigan has learned to be a hero and to have a conscience and he owes that to Jason and now that they were separated by Merlin’s magic Etrigan has to make a choice, stand up for what’s right or turn his back on humanity.

In the end Etrigan fights with the heroes only to find that Jason Blood has been turned to Merlin’s side and while painful Etrigan would rather die than surrender. This two issue mini-series, much like Justice League, gave us just enough of a taste to keep me wanting more. I won’t spoil how the story ends but I will tell you that the heroes don’t win and they also don’t lose because “where there is magic, there’s always hope.”

I can’t say this for all the Future State titles but as for Justice League and Justice League Dark they have shown us what a new path could lead to and I must say the possibilities are endless. I don’t know what DC Comics has in store for us after Infinite Frontier but if we will be getting stories like this going forward the future is bright.