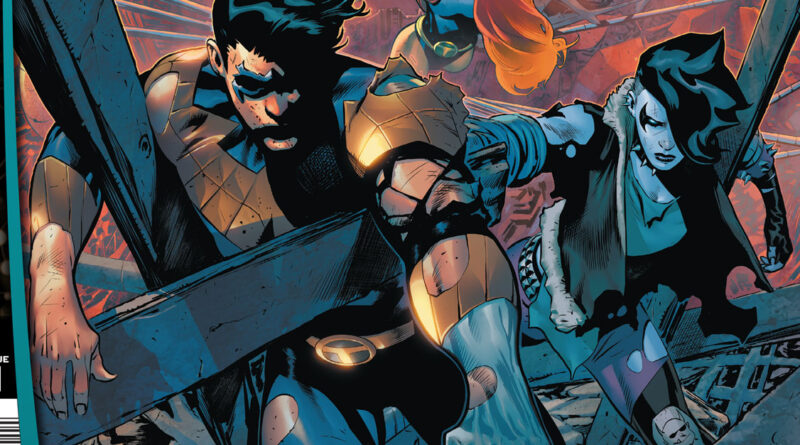 
Future State Week 2 is on sale and these stories needed to be told!

Find out how we have got here to (Future State) by reading Dark Nights: Death Metal issue 7 or click here to check out our review.

This Teen Titans story is written by Tim Sheridan with art by Rafa Sandoval and depicts a dystopian future where most of Earths heroes have died in some sort of “crisis level” event. It’s very clear from the beginning that Tim Sheridan really understands the interpersonal workings of these characters on a deep level. We get to see Flashbacks to happier times, such as the Titans starting the Teen Titans academy, where they train the heroes of tomorrow, and also Dick Grayson’s Birthday. Unfortunately the fun times do not last as we are shown the remains of what was once New York, now the final resting place for some of the Teen Titans. Over all this story did a good job of setting up where it’s headed in issue 2 but didn’t do so well when it came to explaining how we got here. There is some foreshadowing for what could be a villainous or anti-hero backstab moment considering the ending of this issue depicted the formation of a team consisting of the new Deathstroke and Red X and it’s also pretty expected that we will possibly be getting an epic fight.

The story kicks off with Dick Grayson, no longer going by Nightwing, and Emiko Queen Red Arrow passing through a cemetery where former titans, Wally West, Wallace West, Donny Troy and others are buried. They are sifting through the remains of Titans tower looking for anything that may help their cause, we later learn that cause is fighting the Horsemen of the Apocalypse. After some quick grieving of their fallen comrades Grayson and Emiko end up finding an old H-Dial along with the mask of Red X. This is where we flash back to Titans Tower and Grayson’s Birthday, we learn that the students of Titans academy heard about Nightwing creating the Red X persona and it made him a bit of a legend in their eyes.

Back in present day we find that Cybeast, an amalgamation of Cyborg and Beast Boy that they don’t explain in this issue, has returned from the field with a message from Shazam’s team. We get another Flashback to the academy where teachers Cyborg and Beast Boy are demonstrating the value of teamwork and how a team not in sync can be detrimental to the mission. Once again in the present we meet some of the new team members of the Titans such as Bratgirl, Gorilla Gregg, Totally Tubular, Johnny and Chupacabra. We also find out that Raven has been training for a fight as the titans are preparing to take on the Horseman of the Apocalypse. As part of her training Raven is going into the mindscape of a titans prisoner, a former member of their team and a master strategist, we don’t learn his true identity but he is Red X and apparently a protege of Dick Grayson Deathstroke!!

Again this issue does a good job of setting up where we are going but it doesn’t elaborate on how we got here. The story even with it’s slight inconsistencies can still stand on its own and blends in well with the Future State theme DC is aiming for.
Future State: Teen Titans gets a B

Future State: Superman/Wonder Woman is written by Dan Watter with art by Leila Del Duca and it’s a story that does a good job of capturing the feel of World’s Finest where we have 2 prominent superheros who come together to face imminent threats. Dan Watter does a good job of establishing these heroes in their own right by showcasing a type of “day in their life” beginning to this series. Superman starts his off by letting Metropolis know that he is there ready to protect them and the new Wonder Woman, Yara Flor, taking down a corrupt government politician. The story does a good job of expanding on the Mythology that the new Wonder Woman will be built around coming out of Future State while also building on her past with Superman and the Justice League. Jon Kent, Superman, seems to be properly upholding his father’s legacy as the new Superman.

The pacing and panel time for the new characters as with the protagonists was crafted beautifully, no one felt out of place or acting out of character. The issue did well in spacing out the action, both Superman and Wonder Woman were kind of able to save much of the day separately and kind of came together at the end to lend each other a hand. Everything seems to be handled at least for now, but the cliffhanger ending really builds our interest for the next issue.

Without going through this issue beat by beat Future State: Superman/Wonder Woman picks up with Jon Kent noticing that there are 2 suns in the sky, reminded me a bit of Tatooine too. Wonder Woman introduces us to the Sun God Kuat and Moon God IAE of the Amazon Indian Mythology in Brazil. Upon hearing of the second sun in the sky Kuat, obviously upset, heads up to meet this second sun as it is disrespecting his Godhood. The second sun ends up being a villain known as Solaris, a sentient machine from the future, and he is ready to destroy and assimilate Superman. The effects of having 2 suns in the sky wreaks havoc on the planet as you can imagine and Superman and Wonder Woman have their hands full with rescue. After a conversation with Wonder Woman Superman meets with Solaris and brokers a deal, in 24 hours Superman and Solaris will face off in a test of strength if Superman loses he will willingly be destroyed by Solaris. The cliffhanger that this issue leaves us with is that 24 hours later Superman seems to be weaker, even possibly powerless. How will he face off against Solaris and win? Tune in to issue 2 to find out.

This issue does a really good job of setting up where we are going and leaves us wondering what will happen next. This story even slightly weaves in what happens in Justice League if it’s even part of this universe, who knows lol. Future State: Superman/Wonder Woman stands on its own and gives us a fresh take on a possible new DC Comics Duo.
Future State: Superman/Wonder Woman gets an A-

For more comic book news and reviews make sure to keep it locked right here atThe Nerdy Basement. And while you’re here, consider supporting us on Patreon. It’s a   simple way of supporting us so we can keep on providing you with your Nerdy News!