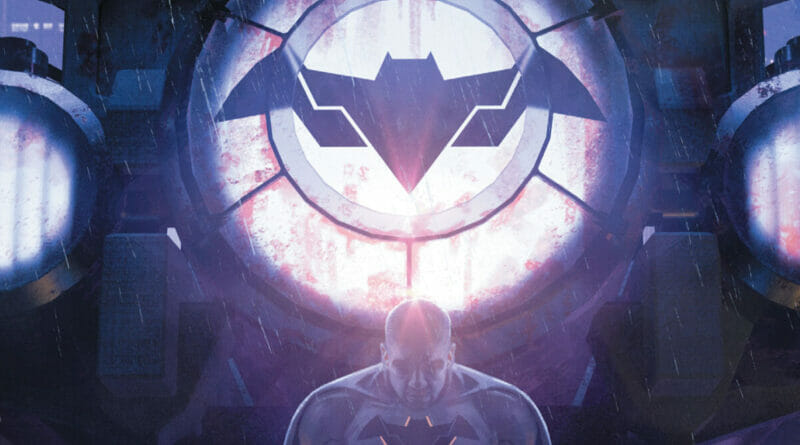 Future State: The Next Batman #4 is Exciting!


Future State brings a whole new set of rules with this issue!

Future State: The Next Batman concludes with issue 4 and sets a pace to keep us excited for what’s to come. With the book intertwining 3 sets of focus for the current Batman Jace Fox, Batgirl’s Cassie, Stephanie, and Selina Kyle, Poison Ivy. Each event provides the sinister outlook we need to fully grasp the extent of The Magistrate’s hold on Gotham.

We left Batman being choked by the murderers he captured whose reasoning was deeper than what was on the surface. Though it was done out of revenge and they killed a murderer in turn. As much as our Batman can sympathize this wasn’t justice and is attempting to get the pair to the GCPD while still needed to protect them from the Peacekeepers since they wore masks while committing the crime. But fear gets better of them which brings us back to the present.

After Batman talks some needed sense into them they attempt to make their way to GCPD through a 3-mile onslaught of trigger happy Peace Keepers. It’s a phenomenal chase sequence with some crazy moments such as the assailant sacrificing himself for his wife. To then a standoff between Jace and his mother, who he then had to injure before she opened fire on him and civilians. Seeing the Fox Family change so much after Joker War makes this so much more interesting and the better for Jace’s upcoming comic series. That’s the highlight of this Next Batman story, we want to see what leads up to this tense family drama.

Elsewhere in a Magistrate prison for heroes and villains alike, Cassie and Stephanie are in a fight of their lives for freedom and the Resistance. Stephanie leading the other captives to distract as many guards in the facility for as long as possible while Cassie looks for the secret prisoner no one is aware of. We get a great mix of watching these prisoners fight together for the first time to have a chance at escape for the first time since their own incarceration.

The fight scenes are pretty fun to see. And while the riot is going on Batgirl does what she does best and makes her way through the facility taking down guards and discovering the secret room where she will eventually find Oracle AKA Barbara Gordon. It’s a surprise the duo was not expecting since the message sounded along the lines it was Bruce. Now the situation becomes tense, the prisoners are now at the mercy of the guards and hope almost seemed lost.

But Oracle and the Resistance come in the nick of time. Everyone from the Bat-Family was there, Robin, Nightwing, Huntress, Batwoman, etc. With the team adding additional support they had what seemed to be their first major victory in some time. We later see a much-needed reunion between Dick and Barbara, while Cassie and Stephanie make amends. The resistance lives on.

Now for a pretty good time with still some dark moments splashed in. Ivy, Selina, and Deedee are still on the run from the Peacekeepers. With Catwoman shot the trio makes their way to one of Ivy’s safe houses. Eventually, their found and continue to go on the run. Until the Deedee sacrifices herself to give the ladies a chance to getaway.

The corporation that built Deedee was shut down with the data she provided Ivy and Catwoman which was a great help to the Resistance. All in all, it was a feel-good story with just trying to give a creation a day of normalcy and a chance at life. Another look at a side of what has become of Gotham City under the Magistrates rules in this Future State.

The complete book can be truly summed up by saying its true purpose was to make us want to know more. Jace Fox and why he chose to take up the mantle of Batman, The Resistance, and all the trials they’ve endured after the “loss” of Bruce Wayne. Future State has just begun to peak our interests with some of our favorite character’s lives drastically changing after the events of Death Metal. I for one need to know why it got this bad and how much canon will this be. I’m more than excited to see a new Batman take on Gotham’s worse, how about you?