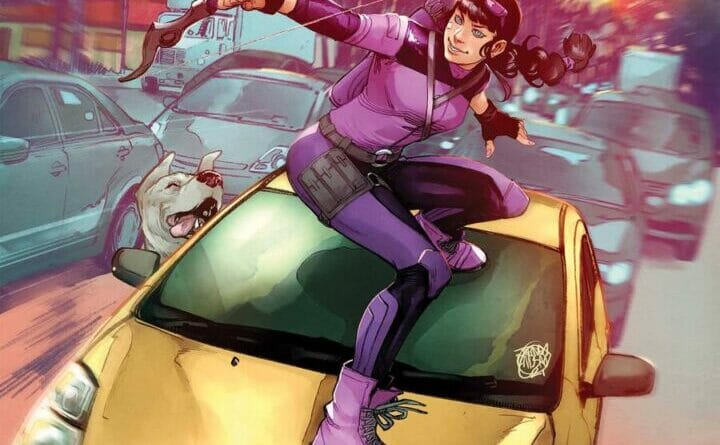 
Kate Bishop decides to leave the West Coast to reunite with Cassie Lang and America Chavez. Yet, upon her return to the East, she now has to deal with the disappearance of a girl.

Kate Bishop, otherwise known as the second Hawkeye or in her words, “the best Hawkeye” is making an impact. The former West Coast Avenger is now a private investigator. After wrapping up a case, she plans on returning to her old home, New York. Both her and Lucky the Dog embark on this return. However, she encounters her estranged sister, Susan. Despite their beef, Susan calls for her younger sister’s help. Reluctantly, Kate agrees to help. Hawkeye goes into PI mode to figure out what is going on with Susan and a young girl’s disappearance. There is a lot Kate and us readers have to uncover. Let’s see what unfolds.

In Venice Beach, Kate is on a mission and texting with Miss America. See narrates, talks with the gunman, and texts. She is a great multitasker too! While on her phone, she disables the perp. She continues fighting other gunmen while texting Stature. She even has the time to throw shade at the original Hawkeye by calling him the other one. She successfully takes down all the men, leaving a message for Detective Rivera. She even tells America that she wrapped up the case.

At Hawkeye Investigations, Kate finds an invitation to the Hamptons. She ignores the many calls from Rivera. She is getting ready to leave L.A. Kate leaves a goodbye note for her best friend, Alloy, and her ex-boyfriend, Fuse. However, the pair hear about her leaving and wait for her. They hug her goodbye and she departs for her plane. Cassie and America await their friend’s arrival. With Clint telling her that she made a good decision. She also gets a text from Jessica Jones, with a few cases in the works.

Kate then finds herself at the Hamptons. She believes it is a trap, with America disagreeing. As soon as she is about to enter the resort, Lucky spots a ball. Lucky runs after it and Kate runs after him. She then finds that it was a plan by Susan to get Kate’s attention. The two start off with a confrontational conversation. It then turns to Susan asking for Kate’s help. While this happens, we see the pair have a similar talk in a flashback.

The reason Kate hates her sister is that Susan told Kate she was an embarrassment to the family. Susan then admits that she was wrong. She even promises Kate that their dad isn’t involved with her. Susan needs help finding out how she got injured, sleeping near her pool. During their talk, Kate gets suspicious of the men following them. Thanks to Lucky, Kate is ready to fight these men. It is all a misunderstanding and they continue their conversation.

Suddenly, there is a blood-curdling scream. Someone’s child has gone missing. A young child named Kennedy has disappeared from the resort. Kate sprints into action. Susan then volunteers Kate to assist with the matter. Kate then proclaims this to be an ongoing investigation. Yet, someone is spying on the guests with surveillance. They are targeting Hawkeye.

Marieke Nijkamp did a great job with the writing! The writer showed how fun Kate Bishop is. One of my favorite parts was her narration to us, talking with a bad guy, and texting her friends. She became interesting within the first few pages. Also, the flashback of Susan and Kate’s fight was good too. Both argued in both conversations about the same things. Yet, the roles are reversed when it came to insults. Finally, her narrating on how to act at this event and having to chase Lucky was great too. Nice job here! The issue also made me more excited for Kate Bishop’s live-action appearance in Disney+’s Hawkeye (2021-) series

As for the art, Enid Balám, Oren Junior, and Brittany Peer did a solid job with the art. The trio gave awesome shots of the Hamptons. The illustrations don’t stop there as we also get beautiful shots of Kate in action. Even the issue’s final shot was great too. Nothing but detailed work!