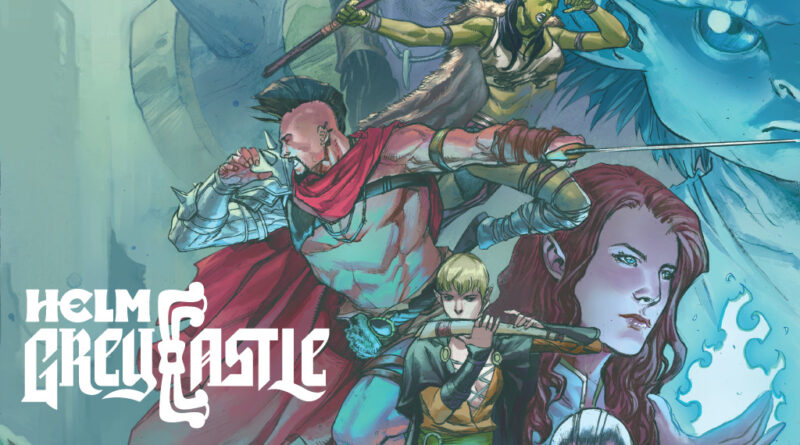 The author of the critically acclaimed Image Comics/Top Cow graphic novel La Voz De M.A.Y.O. Tata Rambo is Kickstarting his next series: Helm Greycastle. This LatinX fantasy is rooted in real Mesoamerican history with a twist: what if the Aztecs and Mayans stopped the Spanish invasion of Mexico but with swords and magic?

“I love playing Dungeons and Dragons with my best friends and I grew up loving Peter Jackson’s take on JRR Tolkien’s Lord of the Rings,” Helm Greycastle creator Henry Barajas said. “But I never see people like myself in the fantasy world. I want to show the rich, bloody history of Mexico while bringing LatinX characters into the fantasy realm.”

Barajas has launched and successfully lead 10 comic book and graphic novel Kickstarters in his decade of working in the comic book industry, so he is offering his expertise. “I want to help folks that want to Kickstart their comic but don’t know where to start,” Barajas says. “This will be helpful for anyone that has never done this before to established pros. The key is to learn from my years of mistakes and success, and have a more confident approach to Kickstarting their comic.”

If you don’t want to Kickstart your own comic, there are plenty of rewards for comic and RPG fans. Backers can get the Kickstarter variant, RPG metal dice, get their likeness drawn into the game, and play the one-shot with some of the creators of Helm Greycastle.

The last dragon prince has been abducted by an unknown threat: AZTEC MEXICA. Helm Greycastle and his band of outsider adventures are tasked with exploring the uncharted land that was once at the brink of enslavement by the savage Spanish Conquistadors…but the Aztecs used sorcery to thwart the Conquistador’s murderous rampage. The possible enslavement caused the ruler, Montezuma III, to declare himself the dictator, causing a power shift and class division. Greycastle and his comrades are recruited by an underground group to overthrow Montezuma III and the Gods that suppress the land.

Will Greycastle join the resistance or save the dragon prince and flee?

The first issue will come with 24 pages of sequential story art and a one-shot role-playing game compatible with the fifth edition Dungeons and Dragons Player’s Handbook. The RPG will take place in the fictional Mesoamerican world set in HELM GREYCASTLE mythology.

Helm Greycastle kickstarter is now live and can be backed using this link!