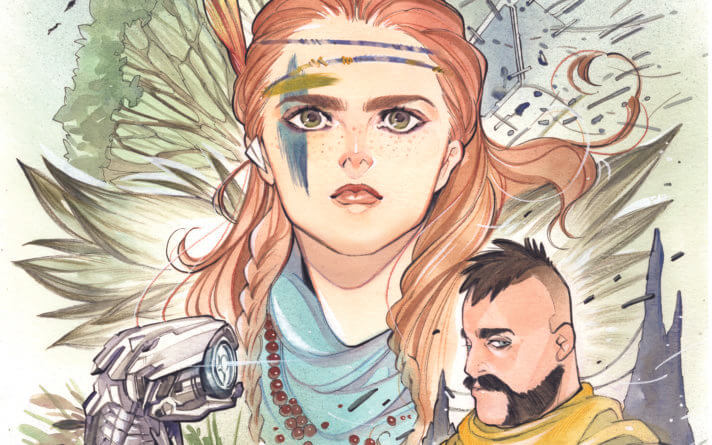 Horizon Zero Dawn: Liberation written by Anne Toole and Ben McCaw with art by Elmer Damaso is set in the same far-future Earth from the PlayStation exclusive of the same name from Guerilla Games. The game’s sequel, Horizon Forbidden West, was released a couple of weeks ago and this graphic novel serves as an extension for Horizon Zero Dawn and a segue to Horizon Forbidden West for readers to understand the world to a fuller extent.

The world is full of natural, overgrown beauty and forgotten ruins. Humans struggle to survive against beast-like machines roaming the world as the dominant species. The protagonist, Aloy, is on the hunt for answers. Aloy is moving north to find answers regarding a mysterious woman from the past who looks just like her, and she is partnered with Erend, who is trailing Korl, an old associate of his sister’s killer. While they travel, Erend tells the tale of his sister, Ersa, and how she was murdered.

The comic is told through two parallel stories: one set in the present and one set in the past. Both of the stories revolve around Erend and his interactions with Korl both before and after the liberation of Meridian. As Aloy and Erend turn their attention and direction towards finding Korl, Aloy urges for a story. Erend begins a tale about how he and his sister, Ersa, ended up working alongside her killer.

We are thrust into the depths of a story where Dervahl (the future sister’s murderer) is leading the rebel Freebooters in a mission against the Carja army. The small group ambushes some guards and we are met with a clean splash page. Licking flames and explosions dance across the page. Ersa is kidnapped and forced into a gladiator-style battle, the infamous Sun Ring, against one of the machines. The artwork here is smooth, especially where the character movements are dulled to show swift action. I particularly liked the way Ersa was very resourceful in her defeat of the ravager.

The second issue begins with a nostalgic ride on a Tallneck before Erend begins his story again. As Ersa works as a slave in the pigsties and gardens, she watches and waits for her chance. After befriending a guard, Ersa is given a chance to escape. Ersa and Erend are reunited; however, Korl and Dervahl are not as pleased. After using Ersa’s inside knowledge, the group is able to sabotage a few of the Carja’s attacks but things turn sour when Ersa stops the group from attacking Avad, the friendly guard who is also revealed as none other than the Sun-King’s heir! Tensions are beginning to heat up within the Freebooters.

In the present, Aloy and Erend fight off a Stormbird in some pretty nifty-drawn artwork. They start looking for clues leading to Korl’s location while Erend starts where his story ended in the previous issue. With Avad, the son of the Sun-King, under their wings, the group start plans to join forces and overthrow the Carja.

Erend is looking for better ale when he overhears Dervahl’s plan to get inside Meridian and then kill Avad, along with the Sun-King and the entire family while burning the capital. With her own plan in mind, Ersa takes Dervahl atop a mountain and pushes him from the clifftop. Now, with the radicals out of the way, the Oseram join with the Carja to reclaim Meridian as peacefully as possible.

As predicted, the Meridian liberation attack ebbs and flows throughout the early parts of the story. In the present, Aloy and Erend find Korl in a market and a fight ensues along with some machines. It looks like Erend has Korl on the ropes but, as the last stop effort, Erend pulls out a bomb, supposedly killing himself to prevent a trial. We then find out that Ersa was the one who killed the Sun-King Jiran. We also show how Dervahl survived the fall, which led to the revenge he sought on Ersa. In the final pages, we see Erend battling with the fact Ersa brought it all upon herself and he is still battling with the void she once filled.

The art style is clean and quite polished. It reminds me of the early 2000s anime-style cartoons and comics that were mass-produced after the Western success of Pokemon, Dragonball Z, and Digimon. As a comic with so much action and movement and fighting, the artist has done a great job at showing it in such a simple style. Some of the concept art at the back of the issues would have been nice to see come to fruition but may not have suited the tone of the artwork. I think the artist, Elmer Damaso, really shines through on the larger splash pages or full-page spreads. And, furthermore, anything with a machine on the page really stands out.

As a story, it feels a bit like a long-winded cut scene. It was nice to see backstory to some key players in the game but for those unfamiliar with the 2017 release of Horizon Zero Dawn, I think these extra bits might fall flat. Anne Toole does a fantastic job at showing off the main characters. Aloy is as confident and strong as she was while controlling her on the PS4 so many years ago and Erend demonstrates that he is a sweet soul amidst a world of harshness. I understand in a story like this we need villains but Korl and Dervahl felt so monotone, they were almost caricatures; however, they are characters pulled from the game so no harm done.

Overall, you could play both Horizon games without reading Horizon Zero Dawn: Liberation and not feel like missing out on anything but the graphic novel definitely fills some gaps from the first game. Perhaps this would have been nicer to have shortly after the 2017 release rather than almost five years later but, marketing is everything and it definitely got me feeling the nostalgia of Horizon Zero Dawn so I am eagerly loading up Horizon Forbidden West. Give it a read to get you ready!