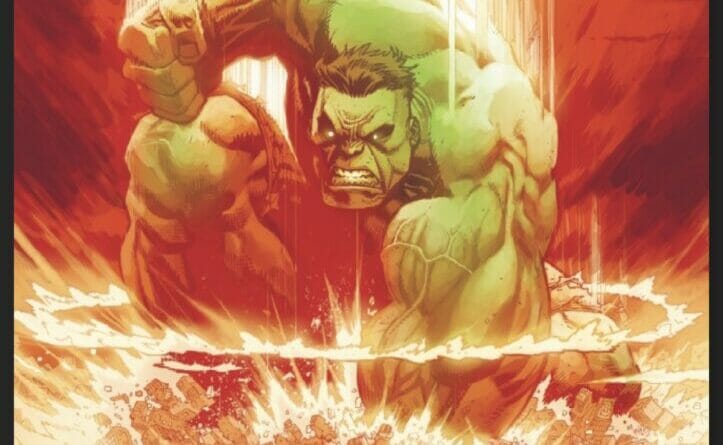 
What if the Hulk existed to protect us from Bruce Banner all along?

The story starts off with Hulk trying to smash down the doors keeping him prisoner. He’s screaming for Banner, getting angrier and angrier. Meanwhile, Banner is by himself hallucinating Betty. She tells him to let Hulk go but he refuses. They fight and he tells her he’s only useful to everyone when he’s not around.  How he never wanted to be a hero, an Avenger, or a monster. He wanted to be a man of science, to help people with his mind. He says one day the Hulk is going to take control of him and he will never resurface. The Hulk is immortal. Bruce is not.

He tells her that it’s his turn to take control. She warns him that this will blow up in his face, disappearing. He sits in his mind palace and waits. The story cuts to an Avengers meeting. Dr. Strange tells them the events of El Paso broke Bruce’s mind. Captain America says he has Iron Man already tracking him. He asks what they are dealing with. Strange states he fractured his mind into parts. Turning Hulk into something like a starship. Banner has control over Hulk’s body.

The next panel is what has become of Hulk. Banner built a mechanical helmet, digging into Hulk’s brain. He punches Iron Man’s Hulk-Buster suit into pieces. Banner tells Tony to stand down and for everything Tony built, he never built something that can beat Bruce’s. He tells Tony to stand down and get out of his way. Tony brings out three more Hulk-Busters to surround Hulk. Tony uses Adamantium shrapnel to cut through Hulk’s skin. Adamantium is the metal Wolverines claws are made of, for those who don’t know. Hulk’s psych must stay angry for Bruce to control him, so Bruce makes simulations in his mind to make him stay angry.

Banner rips his arm off to get rid of the Adamantium. Hulk punches through every suit Tony throws at him. Tony asks how he knows he isn’t in the suit. Banner says he didn’t. He shoots a beam through the wall hitting Tony directly. Tony’s helmet is smashed and he tells Hulk that he is not letting him through the faculty while he is standing. Banner as Hulk, punches his reactor, destroying it. Hulk tells Tony that he is there for the project: A.R.K. Tony has been using the latent celestial energies to create a wormhole to a pocket dimension that he can evacuate civilians to in case of another event-level attack.

Tony begs Bruce to not go through the wormhole because it isn’t safe. Tony says he can die in there. Bruce tells him goodbye and broadcasts a message. He tells everyone that he is leaving because none of them will know how to deal with what he has become. He says that they all have their little plans, armored suits, and all of their clever ideas on how to deal with his monster should his actions not prove to be in anyone’s best interest. He says now they are dealing with Bruce and that no one can make plans for him because he is not controlled by his rage anymore. He is fueled by it.

The art by Ryan Ottley is fantastic. His art especially shines when it comes to action. The action is very fast-paced and brutal-looking. The fight between Iron Man and Hulk was really aesthetically pleasing to look at. I also really like how monstrous he makes Hulk look. Hulk looks like a real threat throughout this comic. Since anger it’s such a big part of this comic, facial expressions are important. Ottley shows the rage in Banners and Hulk’s eyes in a way that you can feel the emotion they are feeling.

As for the writing by Donny Cates, I have to say I’m a little mixed about it. I really liked the scene between Bruce and Betty in his mind. I liked when he told her he never wanted to be a hero and that it was forced on him. The tension is really good. I also liked the dialogue between him and Iron Man. What I have a problem with are his motivations. They tell the readers that his actions are a result of what happened in El Paso but never tell you the events that took place. This is the first comic in the series and there’s no summary of what happened before.

At first, it seems like he’s trying to get rid of  Hulk for himself and others, but then in the end he tells Tony that he’s going to become a threat. That they won’t be able to make plans to stop what he does in the future. It makes it very confusing what drives him to do what he does in this comic. There’s also a part of me that wishes they utilized She-Hulk in this.

He’s her cousin and he is the reason she is who she is so I just wished she got at least some dialogue with him since she also has a big connection to him. This was still an interesting read though. I do think the subject of what would happen if Bruce turned into a villain makes this comic intriguing. Hulk with brains and brawn makes a formidable foe for sure.