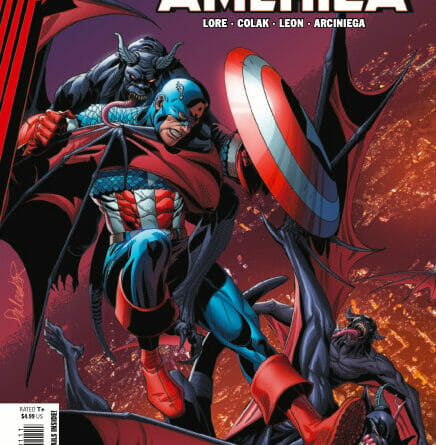 
Captain America is back in the fight against Knull and his invasion! Yet, the first Avenger is in a mental fight with the King of Symbiotes.

With the continuation of the King in Black series, so much has taken place. In the beginning, Captain America and several heroes attempted to stop the invasion. However, Steve and some of those heroes were held captive by Knull. This turned them into dark versions of themselves. Eventually, Dylan Brock would free Cap from his imprisonment. This would not leave our hero unscathed as he is now dealing with the mental feud with Venom’s creator.

The Winter Soldier is running from symbiotic dragons as Falcon clears a path for them. Sam accomplishes this by throwing sonic grenades at the monsters. As Falcon and Winter Soldier are surrounded, they see a dragon getting decapitated by a familiar shield. Captain America rejoins the fight in a badass way! The three best friends fight the dragons. They even take turns throwing around Steve’s shield.

However, as Steve sees his pals fighting the monsters. He is having a verbal dispute with Knull. He watches on as Sam and Bucky fight these demons. No pun intended, Steve is doing the same thing. Knull goes on about how Steve is weak. We then see Captain America getting his shield back and is about to destroy Bucky. As crazy as this moment is, this is all in Steve’s head. Captain America snaps out of the image, he knows he is in trouble and cannot say anything about it. Meanwhile, more dragons are coming with civilians running and screaming for their lives.

A young woman needs to save her little cousin; Steve jumps in to save them. While saving the cousin and a man, Steve is yet again fighting Knull and another creature. Steve is ignoring Knull’s word as he is just fighting. Yet, this does not last as our hero being consumed by another symbiote. This is all while protecting the young girl. Now covered and being harassed by Knull, Steve is in trouble. Once again though, this is in his head. Bucky continues to worry for his longtime friend.

Steve, Sam, and Bucky are setting up another plan. Bucky is on the ground using the grenades and the other two are in the air. As Bucky uses his arsenal, Adrienne’s doll gets tied up in the symbiote. Bucky handles the monster and the little girl gets her doll back. Sam is too worried about Cap; knowing something is up.

This doesn’t stop Sam from lighting up the monsters with firepower. However, one of Sam’s wings is on fire and he is hit by Cap’s shield. He falls and lands hard. Once more, this is deception from Knull. Steve now sees Sam about to be consumed by a dragon. Meanwhile, Bucky is on the ground with the civilians. One of them wants to help him out, but the Winter Soldier declines.

More concerned, Steve picks up the sonic grenades. He jumps in the air and throws them on the symbiotes. He also fights the dragon that threw Sam. Knull returns to trying to sway Steve, but Captain America tries to continue fighting him off. With the help of Falcon, the dragon is slain. The civilians and Bucky are hurt but alive. Sam yells for Steve as we also see him weak. Suddenly, Steve gets up and has embraced Knull’s influence. He calls his suit, his shield, everything he stood for a joke. Knull is over our hero. He has finally gotten to Steve.

Despite these images, they are not real. Steve reaches for his shield and is assisted by Sam and Bucky. They reveal that they knew he had another voice in his head. The pair even reference the times they have been under mind control. Even with Knull’s hold on Steve’s mind, he overpowers it and stands tall with his friends. Steve thanks them for saving him and prepare to finish off this battle.

The civilians are safe and Captain America throws a flame grenade at the monsters. He can kill them and protect his allies. As Bucky puts his arm back in place, our heroes stand tall. However, they know this fight is far from over. With Captain America now talking to himself, he has conquered Knull and is ready to fight again.

The writing done by Danny Lore was spectacular!!! I loved what he did with Captain America. He is seen as a symbol of hope and he had Steve questioning that. Fooling us into thinking that Steve turned was a great twist. Especially, seeing that it was an easy option for Steve to pick.

I also loved the metaphor of Steve fighting his demons, while fighting actual demons. This story did not lose a beat! The theme here is obviously temptation. On top of that, Bucky and Sam being supportive made this story more relevant. They have gone through the same struggle as their friend and mentor. They never shame him for it; they lend their hand to him. The writing was incredible and deserves a lot more credit!!!

As for the art, it was great imagery. Mirko Colak, Stefano Landini, Rogê Antônio, and Nico Leon killed it!!! Obviously, the four were able to control the detail. Even more obvious, they did more than conveying those details. Some of the highlights were the sonic grenades going off, Cap jumping into action, Cap giving in to his demons (multiple times), Falcon’s time to shine, Cap versus the dragon, and Cap’s friend helping him up. That last image added more to Captain America’s theme of overcoming temptation, by the way. Even Erick Arciniega’s coloring work was spot on too!