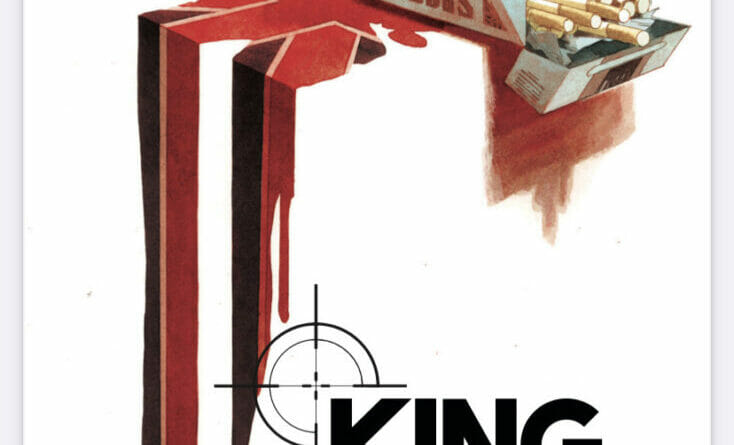 
Looking for a grizzled old man looking to write his wrongs while only having six months to live? If you do, Mark Millar has you covered in King of Spies #1!

King of Spies #1 has been released this week and hails from the hard-hitting mind of Mark Millar (Kick-Ass, Hit-Girl, Jupiter’s Legacy) with artwork by Matteo Scalera. This mini-series follows Roland King, the world’s greatest secret agent who’s been upholding a rather corrupt and unfair system for the past forty years. With just six months to live, Roland King aims to right all of his wrongs. And while part of that plan includes making amends with his children, first, Roland must put bullets inside the very men that used him to maintain such a corrupt way of life.

Mark Millar wasted zero time introducing us to a young gun-toting Roland King during a mission in Panama City in 1990. Immediately we see that this issue will be packing a massive punch with its gung-ho action sequences, Mission Impossible-style stunts, and feats that’ll leave you with your mouth wide open. We even get the classic on top of a speeding train action sequence when Roland is fighting twin mercenaries. A cool nod to 007 and again Mission Impossible and I am here for it all.

As each action beat goes from panel to panel you can feel the intensity and the impact of the action. That’s something that stood out to me almost immediately. After panels upon panels of hard-hitting action, bullets flying everywhere, and explosions (can’t forget those), and Roland King getting his hands on his target. We jump forward to present-day London. And we meet a much older Roland King, retired from his secret agent days, trying to live his best life.

While he’s no longer running around pointing guns at people or blowing things up, Roland is now a director at three different defense companies and the chair of a charity. Despite his hangover, Roland has been vomiting blood. He thinks it’s from drinking but realizes that even on the days he’s not drinking, he’s also vomiting blood. Clearly, there are some concerns here. We get a quick flashback of Roland reflecting on his past and something that his ex-wife and mother of his son, Atticus used to say to him…”what kind of example was Roland setting for their son?”

Despite all of that, Roland is trying to do better and has seen the error of his ways and those who guided him down the path to uphold a system that’s broken and oppressive. He makes it a point to reveal that he was fully aware that was he was doing was not inherently good but also realizes that those actions have also left a rather s***** world behind for his children and the rest of the world.

During this moment of self-reflection alongside his friend. Roland becomes disgruntled with a man inside of this hall who is mistreating his waitress. He goes to confront the man and ends up having a seizure. Roland wakes up in a hospital and is officially diagnosed with glioblastoma. With a tumor of this size in his head, Roland has only been given six months to live. He’s also been given anti-convulsant medication and chemotherapy pills as part of his new treatment.

As with anyone who gets this kind of news, Roland is stricken with a harsh new reality, just as he begins to wisen up. Roland takes it upon himself to make good use of his final six months of life. Reality strikes again as he realizes that he’s truly alone in this world. No one has called him since he’s been discharged from the hospital. His son Atticus never returned his phone call either. He has no wife, no family, no work, and no real friends.

Roland now finds himself at a club, having a drink, and in the midst of a conversation recalling all of the horrendous things he’s done in the past. The same man he confronted earlier in the issue is at this very same club and is now harassing another waitress. Roland follows him and his goons to the men’s bathroom and unleashes hell. Leaving a bloodbath of a mess in the restroom and a bunch of bodies on the ground. Roland takes a moment to let it all sink in. Taking one final vow to rid the world of the monsters he worked for and allowed to roam freely.

Covered in blood, Roland pulls out a cigarette and goes on about his night…

Overall, King of Spies #1 was more than I bargained for and in a very good way. Great action sequences, a protagonist who you can be empathetic towards and can understand his need to right all of his wrongs. He’s lived one hell of a life and that can wear any man down no matter what side of the coin you were on at said point and time. And I feel like Mark Millar really nailed that aspect of Roland King. This series is only four issues long but I cannot wait to see how this all plays out and where Roland stands or falls at the end of it all.

Matteo Scalera’s art is just captivating. His linework and contours and overall character designs are great. The way he draws the action sequences screams live-action (even though they aren’t) but we’ve definitely seen these action pieces in espionage, spy-thrillers before. Mark Millar and Matteo Scalera perfectly blend gung-ho action with spectacular homages to films like 007 and Mission Impossible.

King of Spies #1 is available now digitally and at your local comic book shop.