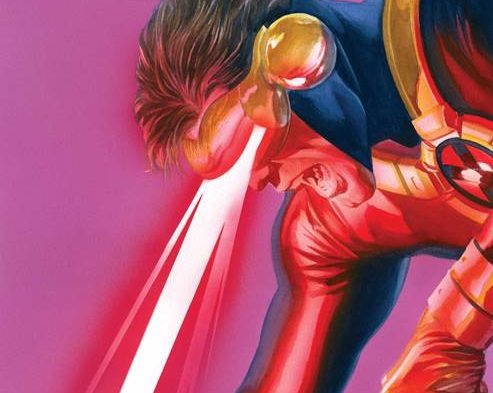 When MARVELS SNAPSHOTS begins in March, fans will get to see Marvel’s greatest characters from the Golden Age to today, in new legendary tales told through the eyes of ordinary people! As curator of this landmark series, Kurt Busiek has handpicked the creative teams for each standalone, double-sized issue and he’s put together an amazing assemblage of talent to tackle April’s issues focusing on Captain America and the X-Men.

“Some people, when they call, you gotta pick up the phone. And Kurt Busiek is one of those people,” says Russell. “I was pretty instantly sold on the project once he started describing it to me— stories about the human cost of these famous conflicts in the Marvel Universe. I truly enjoyed working on this with him.”

Known for his work on books like Second Coming and Wonder Twins, Russell says MARVELS SNAPSHOT: CAPTAIN AMERICA will focus on “the Madbomb’s impact in the South Bronx, a community which had already been effectively abandoned by the rest of the nation, that community’s struggle for survival, and of the search for heroes of its own.” He will be joined by acclaimed artist Ramón Pérez (ALL-NEW HAWKEYE).

Next, in X-MEN: MARVELS SNAPSHOT, readers will see the rise of superheroes from the eyes of a young orphan named Scott Summers, the boy who would grow up to be Cyclops. The future X-Men leader couldn’t be in safer hands. Jay Edition, the co-host of the popular X-Men podcast, Jay and Miles X-Plain the X-Men, makes his Marvel Comics debut with a tale about one of his favorite characters.

“This is a story that’s pretty personal to me—because I’m me, and it’s a Cyclops story; but even more because it’s about the ways that superheroes and the stories around them can become lifelines. If I’m going to be really sappy about it (which I absolutely am), I get to give one of my favorite heroes the same kind of touchstone he’s been to me over the years,” says Edidin. “I’d say it’s a dream come true, but given that I’m the kind of uptight overachiever who overidentifies with Scott Summers in the first place, maybe also a bit of an anxiety dream come true. That said, it’s been a blast to get to sit down and play in a sandbox I’ve spent years cataloging and analyzing and explaining.”

Teaming up with Edidin will be artist Tom Reilly, a rising star artist known for his recent work on Immortal Hulk.

The Marvels Snapshot tour through Marvel history continues, showcasing Marvel’s greatest characters through the eyes of ordinary people! Or does it? In this case, the “ordinary person” is teenaged Scott Summers, witnessing the dawn of the Marvel Age from a Nebraska orphanage and wondering what his place in it might be. What was it like to experience the debut of the FF, the Hulk, Iron Man and more? To wish you could be a part of it all? Writer Jay Edidin (Thor: Metal Gods, Jay & Miles X–Plain the X–Men) makes his Marvel comics debut, teamed with Tom Reilly (Immortal Hulk), to tell a story of upheaval and decision that would shape the X–Men (and the Marvel Universe) forever after.

Acclaimed writer Mark Russell (Second Coming, Wonder Twins) and artist Ramón Pérez(ALL-NEW HAWKEYE) take us to Kirbytown for a literally explosive story of the madness-inducing Madbomb and its aftermath, as the MARVELS SNAPSHOT tour through Marvel history continues. A gifted South Bronx teenager sees his neighborhood destroyed in the initial Madbomb attack, and his future up in smoke with it. What does he do when A.I.M. recruiters come calling? Does he stand by a system that’s failed him, or find a future outside the law? Featuring Captain America, the Falcon, Iron Man and more!