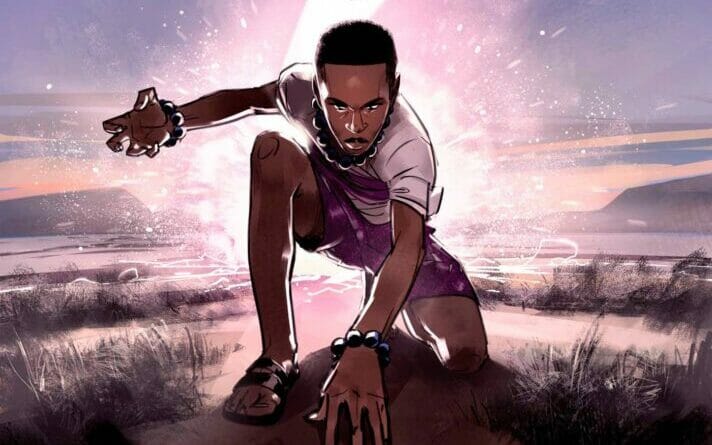 
The origins of Prince T’Challa are retold in this fantastic story! The aftermath of his father’s death and his first meeting with Storm set the stage for T’Challa becoming Black Panther.

After the death of King T’Chaka, his son, T’Challa decides to discover himself. Listening to the advice of his uncle, S’yan, the boy leaves his home of Wakanda. While on this journey of self-realization, the prince is ambushed and attacked. They are planning to keep the prince hostage for a big payday by Wakanda. However, he is saved by Ororo Munroe. We see not only T’Challa’s journey, but the young Storm doing the same.

We start with the events of T’Chaka’s death at the hands of Ulysses Klaw. From his death to the funeral, we then see the young hero talking to his late father. The events that were previously mentioned take place. After the children defeat the thieves, Ororo brings T’Challa to her mini-compound. Several more children are with the young orphan.

She explains to Wakanda’s Prince that she lost everything in the Ethiopian conflict. She was brought in by Negasi. In exchange for helping the kids to safety, they reward the young mutant with food. Ororo then exposed Wakanda for not helping with her situation. Yet, he defends the actions of his nation. He then befriends Subira, with her lending him a place to rest.

T’Challa takes a look at their living situation and decides to help improve it. For the next three weeks, the prince grows a healthy bond with the group, especially with Ororo. A month has now passed and the two are having another conversation. However, it results in Ororo revealing that she will leave the group of children. She is leaving them to further control over her mutant abilities. All of a sudden, T’Challa gets a message from Shuri.

She lets him know that their adoptive brother, Hunter, has the Hatut Zeraze device. This has been responsible for causing havoc in neighboring villages. Hunter aka White Wolf’s goal is to show how dominant Wakanda is. T’Challa then puts two and two together. He realizes that Hunter was to blame for what happened to Ororo’s home.

With spies being everywhere and a crisis in effect, the prince decides to also leave. He even realizes that the men that ambushed him earlier work for his brother. After Ororo finds out about T’Challa’s next move, she hypothetically judges his actions. Believing they will never see one another again, Ororo cries and walks off. Yet, before departing, T’Challa gives Ororo his spear.

The writing for the issue was excellent! Nice job to Tochi Onyebuchi for the work! I loved this retelling of T’Challa’s story. From his father’s death to find some just like him. It was great! T’Challa and Ororo are two sides of the same coin. Both run from their homes, after the tragedy. Yet, their paths cross and foreshadow them being heroes. I also loved the back and forth about both of them leaving the other kids. They are leaving for selfless reasons. However, they are selfishly leaving others in need behind. Absolutely fantastic storytelling!

As for the art, four people did a great job as well. Setor Fiadzigbey, Fran Galán, Paris Alleyne, and Ian Herring deserve praise for their work. The shots of T’Challa and Ororo fighting off the Wolf gang were awesome! I also loved Shuri showing up as a hologram. The details were present in a great way! I also loved how the issue started and ended with both heroes crying after losing someone they love.