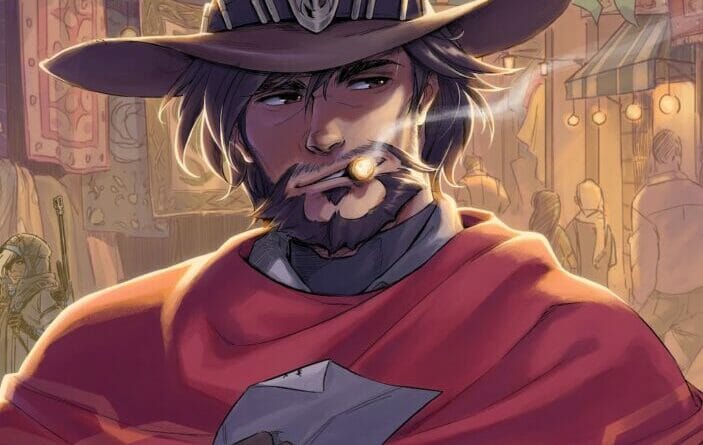 
The former Deadlock Gang mercenary formerly known as Jesse McCree is leaving his past behind and is on a mission to reassemble Overwatch…enter Cole Cassidy!

Dark Horse presents a new Overwatch story focusing on the former Deadlock Gang member known as Jesse McCree. Written by Ray Fawkes with art by Irene Koh, colors by Suzanne Geary, and letters by Deron Bennett. Overwatch: New Blood #1 has the daunting task of cleaning up McCree’s name in a full-throttle effort to desperately detach Cassidy’s past both in-universe and in real life from the man who inspired the creation of the character.

We meet Cassidy on Route 66, lighting a cigar and reading a note. Reflecting on his past but also looking towards the future. He has something to take care of and that comes in the form of former Overwatch member and leader Ana Amari, with who Cassidy meets in Cairo, Egypt. The two former partners play catch up and reflect on their time together in Overwatch and what they have accomplished. But also focus on Cole Cassidy’s past once he left Overwatch, joined the Deadlock Gang and Blackwatch.

Ana informs Cassidy about Talon’s attack on Watchpoint: Gibraltar (if you’ve seen the Overwatch animated short “Recall” you know exactly what Ana is referring to) and the stolen data they were able to get their hands on. The end result based on what Ana is telling Cole Cassidy is quite different from how it plays out in the animated short. Their conversation comes to an abrupt end as they are attacked by Talon.

While they are scuffling with Talon, Ana makes it a point to remind Cassidy about his past. Ana and Cassidy successfully take out Talon. Cassidy notices that Ana is no longer killing those at the other end of her sniper rifle but instead is knocking them unconscious with her sleep darts. Ana uses this moment to highlight to Cassidy that things can change, people can change and so can he. Cassidy reflects on this and starts to believe that maybe he can in fact change and that maybe he CAN put Overwatch back together.

Ana then brings Cassidy to one of her hideouts and hands him a USB drive containing data on all of the other heroes who are fighting the good fight but in separate parts of the world. The potential is there for a group to form and be a much better iteration of the previous Overwatch but they simply need someone to bring them all together and lead them. During this moment we get glimpses of D.va, Zarya, and Ana’s daughter Pharah. Cassidy, now taking on the task to reassemble the new Overwatch, heads out to get his first recruit, Pharah.

The issue ends with Cassidy greeting Pharah and her asking him what is he doing there.

Overall, Overwatch: New Blood #1 would’ve been a more interesting story if it wasn’t shrouded by the dark cloud that is lingering over it amidst the sexual harassment allegations and lawsuits that Activation/Blizzard are currently facing. That sole issue from within the company and creators of the game is what drove for the change of name and narrative both in the comic and in the game itself. So while hollowly interesting, it leaves you with a sour taste.

The name change from Jesse McCree to Cole Cassidy is what it is. Whether you dig it or not that is totally up to you. However, this new story is worth checking out. Even if it’s only to see how the narrative changes within the game and as we go further down the long-awaited road of Overwatch 2.