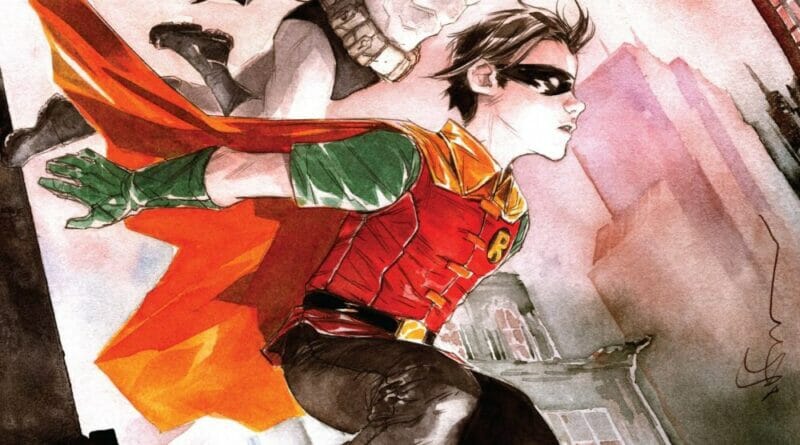 
From the brilliant mind of Jeff Lemire comes forth Robin and Batman #1, a new take on the origin story of the dynamic DC Comics’ duo Batman and Robin

Robin and Batman #1 is written by Jeff Lemire with art and colors by Dustin Nguyen and letters by Steve Wands. This new, three-issue series gives us a fresh take on the origin story of the dynamic DC Comics’ duo Batman and Robin. The issue immediately puts us in the middle of the action as Robin is on a live mission with Batman guiding him from the shadows. Over the top of the action, we get an inner monologue from Dick Grayson as he writes his feelings and emotions into his personal journal.

Right off the bat, you’re taken deep into Dick Grayson’s psyche and how he is feeling as a young child who juggles his grief over the death of his parents, training to become Batman’s sidekick whilst also proving that he has what it takes to be at Batman’s side, and real life. Bruce is as broody as ever as he silently lectures Dick about his little hiccup thus deeming him not ready to be his sidekick. Alfred tries his best to get Bruce to lighten up, but Bruce isn’t giving Alfred the time of day.

Alfred doesn’t give way and makes it a point to tell Bruce that he needs to show Dick, a kid, some compassion and leniency; and that despite Dick Grayson losing his parents just like Bruce did, he doesn’t need to mold and shape him into the person Bruce has become. Dick Grayson continues his inner reflection, hating what he has to do in real life aka school, but loving how being out fighting crime in the night provides him a sense of escapism. But it’s that inner conflict, that inner struggle about not wanting to train but having to train and how he should’ve never gone with Bruce in the first place that really puts things in perspective for him.

Despite whatever struggles he’s having with Bruce, he longs for that acceptance and in a way, wants that fatherly love from Bruce, despite how cold it is. As Alfred picks up Dick from school he tries to lift up Dick’s spirits by providing a sense of optimism. That Bruce is merely testing him, especially with the fact that he ordered Alfred to destroy his costume. Alfred reaffirms that maybe Bruce is right, that maybe he should just slow down and just give this superhero gig a few years before he can really hang with the boys. Dick doesn’t take this lightly.

He decides to take matters into his own hands. To go against what Bruce wanted. To be the total opposite of what Batman is and what Bruce is training him to be. He creates his own suit in the classic red and yellow colors, honoring the Grayson name. But most importantly to really piss Batman off. This is a really important moment here because it really shows how much Dick Grayson understands Bruce’s psyche, but also deeply understands what makes him tick. We all know that Batman is who Bruce truly is, the playboy billionaire is truly his alter ego.

It’s Bruce’s inner rage and his life-long grief, and trauma that truly brings out of him everything that Batman stands for. That sense of darkness, fear, and justice. Lemire puts it perfectly as Dick Grayson creates his Robin suit…a literal antithesis to what Batman is. That’s why this decision is going to affect Bruce so much more than Dick not following the rules. We then switch the focus on Batman himself who is now silently pursuing the wannabe gangsters from the beginning of the issue.

Here Lemire just does what Lemire does best. Diving into the psyche of the characters he is writing and drawing deep parallels between the titular characters and how their stories are quite literally the same. But just like in this issue, neither of them were really seeing the bigger picture. Robin was too focused on proving himself and Batman was too focused on Robin’s performance rather than solving the task at hand.

As Batman follows his hunch on the gangsters, Robin follows him. Both end up in the sewers. Robin loses track of Batman and runs into Waylon Jones aka Killer Croc. Waylon attacks Robin after he notices his suit and asks him where’d he got the suit and if he recognizes who he is. Batman comes in to prevent Killer Croc from further attacking Robin and ends up on the receiving end of Croc’s attack resulting in two broken ribs. The duo decides to leave Killer Croc alone and head back to the Batcave.

Robin reveals to Batman that he thought this was all a test. That he thought all that Batman wanted to see from him was determination. To simply prove that he was ready. Batman doesn’t acknowledge what Robin says but critiques his costume instead. Calling it ridiculous. In to which Robin responds: “it’s not ridiculous. it was my family’s” — my heart!

Bruce proceeds to reveal to Dick a fresh Robin costume that he made for him as he planned to ask Dick Grayson to join him at his side as Robin. However, knowing that there was only one way Bruce could’ve known about the Robin being his family symbol. Dick puts two and two together and gets angry towards Bruce. Telling him “that was all I had that was just mine”.

The interesting thing about this particular moment and especially this particular line is that, in Dick’s eyes, Bruce took away from him all that he had left that connected him to his late parents and siblings. The Robin was the Grayson family crest. It tied perfectly into their moniker as The Flying Graysons. As a child who was grieving the death of his family, Bruce literally rips it away, despite the costume being something Dick actually wanted.

But it also shows that Bruce actually cares, deeply, about Dick and this gesture was a way of relating to him and his pain. To show him that he could wear that pain like a badge of honor, thus honoring his family’s name as he fought crime. Despite that, the kind gesture did more damage than good. Dick ripping apart his journal is fireproof of that.

The issue ends on a really solemn note as we follow Killer Croc as he walks back to the circus. Dick Grayson monologues his speech from the beginning of the issue to perfectly parallel what Killer Croc himself is also feeling. Giving us a sense of how Killer Croc also views himself and how that feeling of being down and out, now as a monster, is where he feels he should be. How he fuels that feeling and ultimately becomes the big bad we’ve come to love throughout comic book history.

Overall, Robin and Batman #1 was a breath of fresh air for me personally. It’s been quite some time since I read anything written by Jeff Lemire and I’m glad I gave this issue a shot. It’s Jeff Lemire at his finest and it’s only the first issue. I usually look away from watercolored comic book issues, just a personal taste of mines but Dustin Nguyen’s art and colors really pop in certain parts of this issue. More specifically at the start of the issue and even more when we get those cool rooftop shots of Batman.

Robin and Batman #1 is available now at your local comic book shop and on digital.