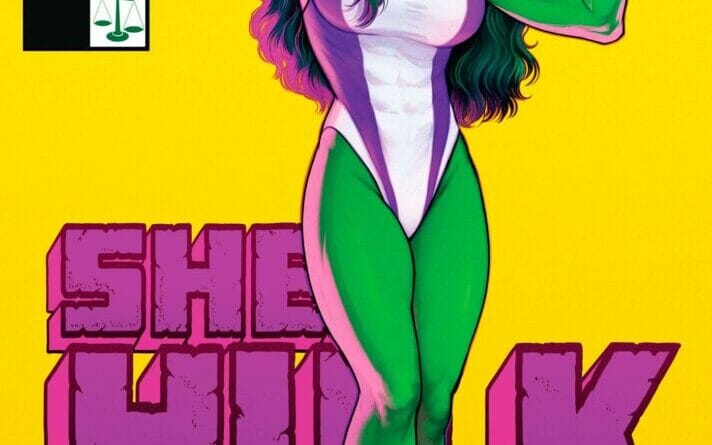 
Can Jennifer Walters Start Over and Rebuild Her Life? — Spoilers Ahead For She-Hulk #1

The story starts with a summary of She-Hulk aka Jennifer Walters, the cousin of Bruce Banner aka Hulk. Jennifer Walters was a shy attorney, good at her job and quiet in her life when she was gunned down by criminals. A gamma-irradiated blood transfusion from her cousin didn’t just give her a second chance at life, but also super-strength and bulletproof green skin. In the Avenger comics, she was stuck in her She-Hulk form, turned to a more savage state of mind. She now has control of her mind and body. She now has to start over to rebuild her life.

We open the story to see Jennifer Walters walking down the street to go to an interview she has with a law firm. She suddenly gets stopped by her nemesis Mary MacPherran aka Titania. She heard Jennifer got turned back and wants to fight her to see if she will be more of a challenge. Jennifer asks her why she is doing this if she already turned her life around. Titania states that life turned her back to her old ways again.

She lifts a stop sign, ready to hit her, but Jennifer tells her to hold on a second. She starts to strip out of her suit jacket and skirt, telling her that she isn’t ruining her only suit for a fight. Titania asks if she can fight her in her underwear. Jennifer transforms into She-Hulk, telling her she has beaten her in less. The fight starts.

While they fight, She-Hulk asks Titania about her life while fighting her. She asks if she is married and if she’s got a house. Titania says yes while She-Hulk has her in a choke-hold. She tells her it’s a rental. She-Hulk congratulates her. Confused, Titania punches her. Asking what is wrong with her. Why is she being so nice while she fights her? She-Hulk throws her in the dumpster.

She-Hulk tells her if she had what Titania had she wouldn’t throw it away. Titania climbs out telling her she suddenly feels bad for her. She-Hulk asks her if she is done fighting her. That if she needs someone to take out her aggression on, she can make a deal to fight her on the side. This way Titania doesn’t have to go to jail.

This means a lot to Titania and she makes a deal to meet at an open space with She-Hulk from now on. She asks She-Hulk if that is actually her only suit if she needs any help or money. Embarrassed, She-Hulk declines telling her she is alright. She leaves to change back to her normal form. She gets the job at the law firm with a small office space. She is happy she is finally employed.

She then meets Janet Van Dyne, the former Wasp, who gives her an old apartment that she can stay in till Jennifer gets back on her feet. She is enjoying her new apartment when suddenly a character who should be dead appears. His name is Jack of Hearts and he needs She-Hulk’s help.

The art by Roge Antonio is amazing! The setting of this comic is very detailed. She-Hulk looks both beautiful and powerful. A force to be reckoned with for sure. The expressions are super expressive and you always see the emotion the characters are trying to portray. The colors are super vibrant. This is the best She-Hulk has looked in a long time!

As for the writing by Rainbow Rowell, this is some of the best writing for She-Hulk I have seen in years. I didn’t like what Marvel has been doing with She-Hulk writing-wise for a while. It’s great to have her back to normal and better than ever! I like how the dual personalities between Jennifer and She-Hulk are written.

How Jennifer is shyer, less confident than her green counterpart. I also like how kind she is when dealing with her foe. Her offering to fight Titania just to get her aggressions out, without having her go to jail was heartwarming. She just wants to help people. I also like the quick banter and dialogue. Overall this is a great read! I definitely will keep up with this series.