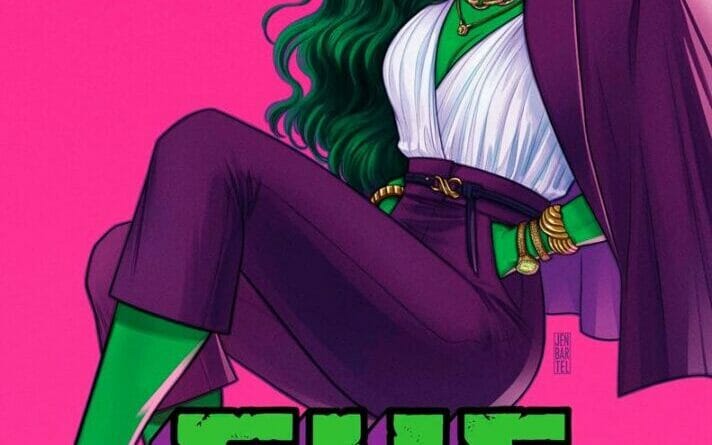 
How is Jack of Hearts Alive?! – Spoilers Ahead For She-Hulk #2

In the last issue, She-Hulk returned to civilian life. She has a new job, a new place, and a new wardrobe. Everything was going great until someone unexpectedly crashed back into her life. Jack of Hearts was a friend and fellow Avenger–a half-alien, half-human superhero with the powers of a nuclear reactor. Jennifer thought he was dead. So why is he passed out on her floor?

The story starts off with Jack of Hearts slumped on her floor. Jennifer helps him up with no hesitation. Shocked that he’s alive. She gets him a glass of water and asks him why he is here. He tells her he doesn’t drink or eat but accepts the glass. He doesn’t know why he’s there. He then tells her what happened to him before his death.

How Tony Stark built an isolation chamber for him because the radiation was eating him alive. When it wasn’t working for him anymore, Tony told him one day he is going to blow up like an atomic bomb taking everyone with him. He chose to fly up in space so he could die without hurting anyone. He was dead for a long time.

He ended up waking up in some type of containment, his radiation being drained from his body. He was awake and asleep for some time before he managed to escape. He followed She-Hulk’s familiar Gamma Rays that all Hulks give off. Since he was familiar with her she was the one he went to for help. He realizes when she takes the empty cup that he can now drink again. He tells her that he hasn’t drunk anything since college. He’s been an energy battery for so long he barely was even human. She-Hulk kindly suggests he tries food.

This leads to a heartwarming scene of her feeding Jack a bunch of food in her fridge. He tries everything from cold pizza to ice cream. He’s so amazed it’s endearing. He tells her she probably wants to tell the Avengers he’s back. He knows if Tony finds out he’ll want to run tests on him. He rather drifts in space than for that to happen. She-Hulk asks why he doesn’t want any answers on why he is altered.

That there are people that could help him. He doesn’t trust anyone but her though. He offers to leave but she convinces him to stay. He passes out on her couch for the first time in forever. The next morning Jennifer goes to work confident in her She-Hulk form. The comic ends with a creepy voice calling out to Jack and a bulletin board with pictures of She-Hulk.

The artist in this comic book is Roge Antonio, who draws She-Hulk beautifully in this series. She’s muscular yet beautiful at the same time. He also draws really good expressions for these characters. This makes the jokes in this have a great comedic effect. The colors are vibrant as always. Rico Renzi does a great job coloring this so readers can have vibrant pages. I love the attention to detail Antonio shows in the background. The city she lives in is interesting to look at. The night sky from her window is pleasing. Just a great job overall.

The writer is Rainbow Rowell, who is an amazing writer for She-Hulk. You can just tell that they understand her character. She can be funny but she’s also really kindhearted. She’s compassionate which is really showcased here. She sees someone she thought was dead show up and instead of being suspicious, she immediately tries to help.

She even tries to get him to enjoy things when he’s sad, like serving him a bunch of food just because he hasn’t had it in a long time. I love that about her. Jack of Hearts is an interesting character too. I don’t know much about him but I’m intrigued. The comedy was well written here as well. I can’t wait for the next issue!