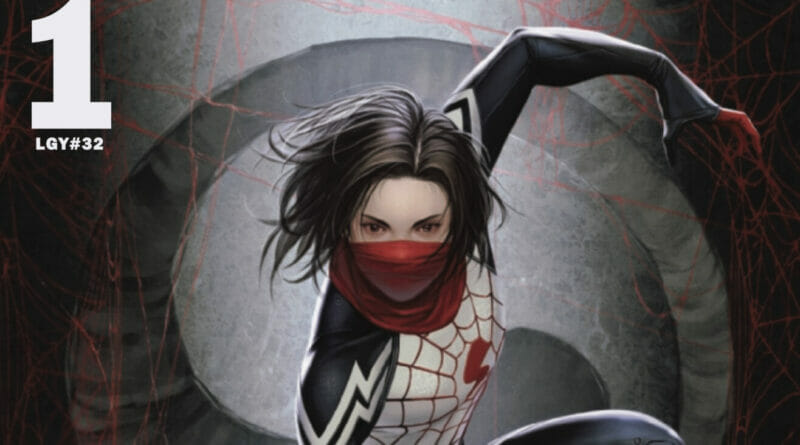 
Can Silk Survive The Curses of Social Media? – *This contains spoilers for Emily Kim’s Silk #1*

Before opening on Silk laying waste to criminals, the comic opens on a schoolgirl falling through a crevasse in South Korea to a hidden temple. Foreshadowing 101. Emily Kim begins the story with Silk’s rising popularity in the news and social media world. Cindy Moon is in therapy for her life being too normal and stuck in a rut. J. Jonah Jameson shows his age by asking why there is a pound sign before SilkRules and its evidence of the “old people being old” trope. This is all within the first few pages and is a good world build/setup for the remainder of the issue.

We are then shown a social media star “Lucas Young”, who looks to be an amalgamation of all YouTube stars (and, tbh, I’m too old to name any new ones… um KSI? Mr. Beast? Have I become J. Jonah Jameson…?), trudging and filming through a haunted temple exhibit *ominous music here* and it kinda reminds me of when whichever Paul brother went through that Japanese forest. Anyway, low and behold something bad happens and there is a zombie-type monster who craves hunger.

In the morning, Cindy is called to the museum where there has been a robbery. She gets a spidey tingle that not all is as it seems and she suits up. Silk sneaks into a back room and finds Lucas Young but he is not so young anymore. The “creepy cosplay guy” has seemingly sucked the youth out of him. The issue closes out with the villain on a throne with fog around her feet and stating that the energy was “a good start but I need a lot more.” So it looks like Silk won’t only be fighting existentialism and social media but also ancient Korean magic. Oh, dear.

The story is aimed at 9+ and definitely has the feel of being kid-friendly. There is a distinct “social media is everywhere” tone that the writer is trying to get across, and although it feels a bit on the nose, it’s hard to say that she is wrong. Terms like salty, fire, and clout may feel cliche to me, but they definitely fit the character and potential audience. I haven’t read many Silk comics but I really like Emily Kim’s approach. There is a lot to work within the character and they have already opened up a whole world of characters in this issue.

Takeshi Miyazawa has a unique style that crosses detailed close-ups to minimalist long shots. The sequences of Silk being in the suit were particularly well-drawn and intricate. It is a quick read and would be a nice place for new Silk fans to sit. This will be a 5-issue run. #SilkRules