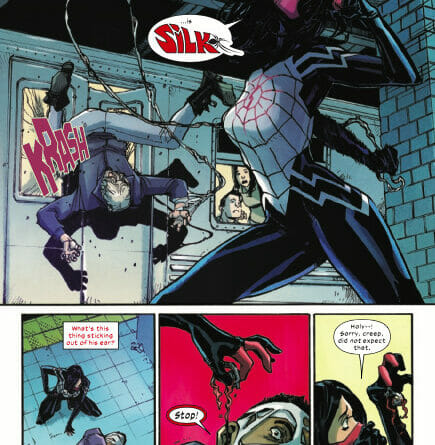 
It is Cindy Moon’s first day at Threats & Menaces. She is proving herself at her day job. The young woman carries that same energy in her night job as Silk.

Silk is one of the many Spider-Man characters in Marvel’s methodology. The Asian-American was bitten by the same spider as Peter Parker. She would gain powers, survive many years in a bunker, and be reunited with her family. She even aided other spider-themed heroes in saving the multiverse. Now, Cindy is working for J. Johan Jameson at her new job. Yet, she also has to deal with a new criminal that could lead to her boss’s demise.

We start the issue with two robbers, Carl and Karen robbing a neighborhood store. The pair argue about Carl’s missing thumb. They are then interrupted by the Silk. Karen tries running and Carl tries fighting. However, they obviously are no match for our hero. Karen attempts to stab Silk while proclaiming that she murdered her parents. Silk dedicates the beatdown on the criminal to their late parents.

The store owner thanks Silk for her actions. They even offer her anything to take, but Silk refuses. She wants to follow Peter’s example as a hero. However, she takes a jacket offered to her by the owner. Cindy is home and gets ready for her first day while talking to herself. Her brother, Albert is making her coffee. As he gets his sister ready, she talks about what he was able to accomplish. He even knows about her being Silk.

Cindy has a brief conversation with Johan. He introduces her to Derick as an aid. On her first day, Cindy is reading, talking with sources, and meeting Norah Winters. Winters is another employee that always disagrees with Johan. She sort of picks on Cindy for being old-fashioned.

After this, Derick gets a text from a source. A gang named “The Mulligans” have been killed. Cindy and Derick head to the crime scene. They take notes and Cindy notes that these men were killed with scratches. Then the journalists are confronted by a cop. After the confrontation, Derick snaps a photo of the crime scene. We then see Cindy working on the story. She wraps up her work and meets Johan in the elevator. The two talk about going to the crime scene. As this conversation comes to a close, Johan comes off pretty misogynistic.

Cindy departures, then witness her boss being followed by two men. The men approach Johan and threaten him for the publishing of the story. Cindy now wearing her Silk suit witnesses the meeting. She realizes that she is to blame for this. Johan tells the men to metaphorically shove it. The web-slinger charges in to save her boss. During the fight, she rips out a chip out of one of the men’s ears.

Johan offers a lot of money for Silk to be his bodyguard. Silk declines the pay but accepts the protection offer. Back home, Cindy examines the device she pulled of one of Johan’s near-attackers. It came from Fujinet, which was founded by Matsuko Ishii. The ownership would then pass down to her daughter, Saya. Cindy is finding this out, reading more about the tech company.

We then pan over the limo pulling up to a home. The home is owned by Saya. She is then greeted by a mysterious, giant cat-looking creature. The monster offers her tea, it told her that the Muillgans could not agree to certain terms. This came after Saya asked if they were willing to deal with her. The issue ends with Ishii saying that she has seven more targets left.

This story was a pretty good read. Maurene Goo did a very good job. I loved a lot of things here. First, the referenced Zendaya in the story, which I found interesting. Even funnier, Cindy is actually in Spider-Man: Homecoming. Also, the writing for Johan was great. He has that attitude of being clue about what he says and also having the balls to stand up about threatening criminals. Aside from that, the writing of Cindy was awesome. A strong woman making a first good impression with her boss, co-workers, and most importantly us. Also, it’s fun how Johan isn’t calling Silk a menace for helping out.

The art was done by Takeshi Miyazawa and Ian Herring. The pair also did very well with their work. It is simple work that should not go unnoticed. The details are always important. Thankfully, these two display that well. My favorite panels are Silk in action. Two of the photos with her being in on a single page. I loved the art and the writing!