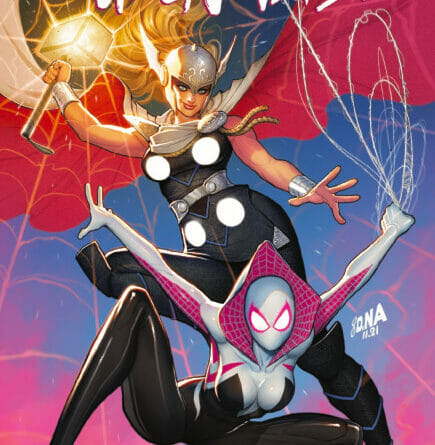 
It looks like Miles Morales is not the only Spider-Hero to deal with their variants. Spider-Gwen meets, not one, not two, but three versions of herself!

The Earth-65 resident, Gwen Stacy, is dealing with another multiversal threat. Yet, it is not another Spider-Verse. These variants of Gwen Stacy are variations of herself if she was Captain America, Wolverine, and Thor. This came about due to a confrontation between her and Finale. The distant future villain used a quantum device on Gwen Stacy, causing a drastic change in her home, and five different versions of herself appeared.

Now, it is up to Gwen Stacy to find these variants and resort to her Earth’s timeline. Let’s see how this unfolds as she encounters her first of a few variants, Thor-Gwen. Our story starts around 800 CE in Norway. A woman is being threatened by Dr. Cephalopod. This being is an amalgamation of Doc Ock and Gargantos. The latter of which will make its live-action debut in Doctor Strange in the Multiverse of Madness (2022). The being wants the Goddess immediately. The civilian then reveals that Thor-Gwen fled via this world’s Bifrost. Or in this case, the multiversal gate.

Along with the doctor, he has Nightbird, a sidekick to Nighthawk assisting him. She is also the owner of the Terminal Six faction. While looking for clues, they are interrupted by Finale. She is eager to find Gwen, but can’t find her quick enough. Cephalopod is explaining how Reed Richards’s theory was right. They can only travel at one point in time or cause further damage to the multiverse. Finale cuts him off and just wants the job done.

After that, we see Gwen driving herself and Thor-Gwen. The pair were on Earth-65, specifically Upstate New York in 1951. Odindaughter is fascinated with a magazine, while Gwen is planning to meet Cap-Gwen at a fair. Thor-Gwen then explains Cap-Gwen’s story. First, it was Samantha Wilson that was the original Cap in WW2. This inspired the then orphan to replicate the super-soldier serum. Now, she is the second Cap in the revised timeline.

The two Gwens make it to the fair. They are greeted by the hero as she is doing autographs. Gwen explains the multiversal threat to Cap, believing she will think that it is a sick joke. However, Cap believes Gwen, even talking about Nazi Dinosaurs and Jack Kirby. Gwen is relieved and Thor-Gwen is showing off Cap’s calendar. Cap-Gwen is flabbergasted as she sees her other variant. This makes her think that Spider-Gwen and Thor-Gwen are Skrulls.

This then leads to an altercation between the variants. Cap is gone and the other Gwens have been abducted. The being that took them was Spider-Zero, Master Weaver from the Spider-Verse. Zero reviews her threads as she looks at the quantum event. This helps Spider-Gwen as she and Thor-Gwen attend a party in the city.

The costume party is being hosted by Markham Aarkus, who was the original Vision. The celebration is later crashed by Cap-Gwen. She is then confronted by another variant of Gwen, Wolverine, or Wolvie-Gwen. The pair fight as the guests look on, including two kids in the closet.

Spider-Gwen and Thor-Gwen then come to the rescue, stopping their variant. Yet, Wolvie-Gwen is stabbed by Roach-Man 2099. Both he and Fossil are working for Finale and are looking to stop Spider-Gwen. The fight progresses between the Gwens and the remainder of the Terminal Six. Spider-Gwen is about to have her body taken by Fossil. Cap-Gwen prevents this by decapitating the beast. Thor-Gwen then kills the creature.

The police then threaten the heroes but are once more targeted by Roach-Man. Wolvie-Gwen then kills the villain. At the End of Time, Finale catches a cat sending a message to Spider-Gwen. She hears that it is her father. Finale then picks the cat, about to explain her story. The Gwens then talk about working together to stop this madness. Wolvie-Gwen refuses and Zero finds that the space-time continuum is good for now. The magic-based hero also referenced Devil’s Reign. Specifically how heroes were being outlawed by Mayor Fisk. There is hope for the team in restoring the timeline and beating Finale.

The issue ends when the boys’ real names are revealed. Tony Stark’s son, Howard, and Harry Osborn’s son, Normie. Howard expresses sadness over his friend’s injuries. He then promises to build armor that will protect him. This hints at the next Gwen variant, Iron-Gwen.

This issue was an exhausting read. I felt that it could’ve been better. Too much was added with little to no context. Also, the pacing of the issue hurts the story a lot. Tim Seely wrote the story by the way. The only good thing that came out of it was the comic relief from Thor-Gwen. That was it. Plus, it was really hard to follow and understand a lot in the read. Miles Morales is doing the same story. However, Miles’s series is paced better and makes sense. Gwen’s story feels rushed. It could get better, but Seely just needs to take time to develop all these characters. And I am not just talking about the Gwens.

As for the art, Jodi Nishijima and Federico Blee did a solid job with the art. The designs of the characters looked really good. Not just the Gwens, but also Dr. Cephalopod in the beginning. The fight scenes were alright too, mostly the ending. I loved Cap-Gwen’s design. The shield especially with the little doodles on them was a nice touch. It captures her character. As for the cover, David Nakayama did a great job! It was the best thing that came from the story. It actually makes you want to read the story. The shot of both heroes working together is beautiful. The complete opposite of this story.