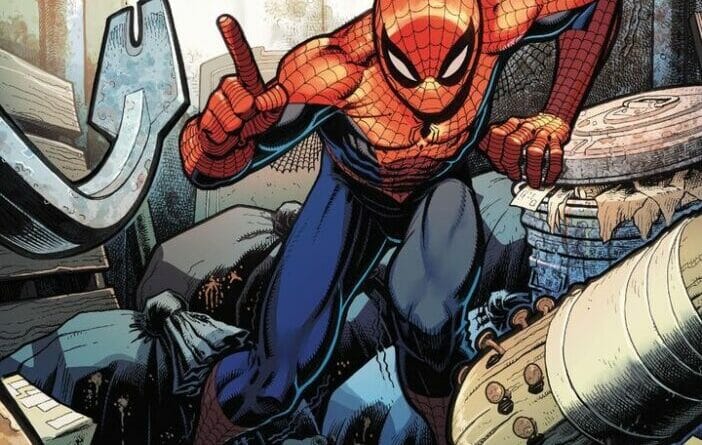 
Can Peter Parker get his spidey-sense under control?

The story first gives a summary of what happened to Peter Parker in the last issue. Peter’s luck has been steadily declining. Fresh from his coma, Peter’s body has never been in worse shape, as his non-stop Spider-Sense can attest. Barely able to sit up without a lot of pain, his last misadventure saw him at the mercy of a monstrous orderly until he was rescued by none other than his girlfriend, MARY JANE. Now, Peter has to face what recovery looks like.

The story starts off with  Peter in pain because his spidey-sense keeps flaring when there is no danger. It is really hurting him health-wise ever since he woke up from his coma. He gets his spidey-sense to go away for a short period of time so he can recover. A nurse comes in to start his physical therapy but he tells her he doesn’t feel up to it.

She gives him a package, leaving him alone. The package is a spidey suit and web-shooters some fans were giving away from an auction online. He puts on the suit, sitting on top of a building to see if he can help anyone as his own idea of physical therapy.

He finds someone to help, stumbling across these two dumb carjackers that he thinks will be easy to stop. He jumps toward them and tries to use his web-shooters only to find out that they are toys.  The car ends up hitting him. He starts getting beaten up, realizing that he can’t use his spidey-sense anymore.

This makes him sluggish, he has no response time to anyone’s attacks. Captain America comes to save him. Someone fires a bullet at Spider-man. Captain America throws his shield at Spider-man to block the bullet but it ends up knocking Peter out. Spider-Man usually catches Spider-man’s shield so Steve was shocked when he fainted.

It then flashes to a scene of a young Peter Parker who is sick. Aunt May kindly checks on him, asking if he needs anything. Apparently, he stole a pack of gum as a kid and she tells him that they don’t steal in their family.  How Uncle Ben is going to have a talk with him when he’s back.  She gives him medicine. saying it will stop his pain senses.

He gets to the window to see a metaphorical Spider-man made of webs that represents his spidey-sense waiting for him outside. He gets scared, closing the curtain to keep it out. If he takes it back he will feel the pain he felt when he had it. He cries, huddling under the covers.

His uncle then comes in with the gum he stole. He bought the gum, as well as apologized on Peter’s behalf. He ends up teaching a young peter that doing the right thing can be painful and not always rewarding but it has to be done. How he has to choose to do the right thing no matter the cost. Peter promises he will never forget this lesson. This was super heartwarming to read! Peter then gains the courage to embrace his spider-senses no matter the pain it brings. He takes it head-on, saying he will never give up. He wakes up in his hospital bed with his powers restored.

The art by Patrick Gleason is very good. The facial expressions are a standout. You can just feel the pain Peter is feeling from the art. I loved how he drew little Peter Parker, it was so cute! I also liked how the action looked! It was very chaotic when Spider-man was trying to stop the criminals in the van. Morry Hollowell and Nathan Fairbairn did a great job with color here, everything is very vibrant. I will say some of the imagery can be a little jarring though.

I know some of it was supposed to be a metaphor but when I saw a spider bursting out of Spider-man’s head it made me stop for a second to figure out what was happening. Besides some of the confusing metaphoric imagery though it was very well done!

As for the writing by Patrick Gleason, he did a very good job with the characterization of Peter Parker. I like how he writes Peter’s thoughts. I especially love the scene he wrote between a young Peter and Uncle Ben. How he teaches Peter that being a good person means never giving up even when life gets hard. How you shouldn’t turn away from doing the right thing even when it hurts. That’s a great lesson and I hope readers learn something from that. The dialogue was a joy to read. I definitely recommend this comic!