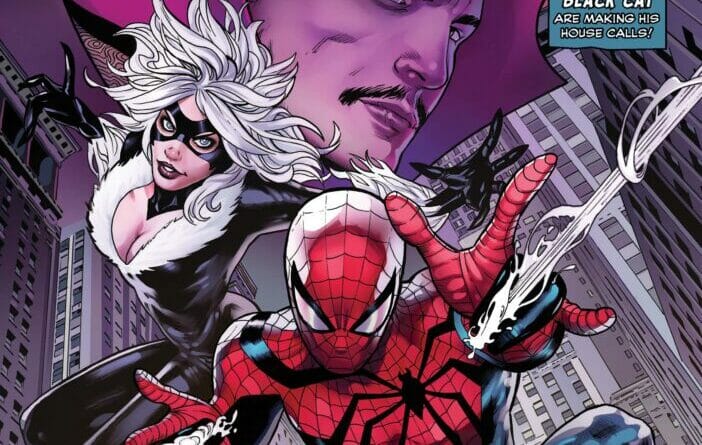 
Spider-Man and Black Cat are tasked with handling Doctor Strange’s to-do list. However, Peter Parker is not under the mask. This causes friction between the new Spider-Man and the Black Cat.

In The Death of Doctor Strange: Spider-Man #1, two of Marvel’s biggest stories have collided into one big event. First off, Peter Parker/Spider-Man is inactive as the wall-crawler, after falling into a coma. His clone, Ben Reilly has taken his place as requested by Beyond Corporation. This decision leads former love interest, Felicia Hardy aka Black Cat to believe that Reilly selfishly took the mask for himself.

Yet, as the two are butting heads, they receive a message from Doctor Strange. In the second story, the Sorcerer Supreme has been murdered and the crime is under investigation. It is being run by a remnant of the late doctor and Wong. His demise causes chaos which now involves the street-level vigilantes. Let’s see what the pair must do for the slain doctor.

Felicia is in Peter’s room and talks about how his heroism only gets him hurt. She continues to see the bravery Peter displays as Spider-Man. As she examines her comatose ally, Ben Reilly shows up. This enrages Felicia and calls him a thief. Once more, she believes he took the mask for him. Suddenly, the pair are interrupted by a message from Doctor Strange.

This is a message from the past for Spider-Man, specifically Peter. Announcing that he has died, he has Spider-Man make his way to the Sanctum. He does this knowing he can trust the wall-crawler. Ben and Feilica head over to the Sanctum, as she tells him he isn’t Spider-Man.

They then make it to the Sanctum and are greeted by Wong. As they conversate, they see the younger version of Strange walking around. Ben and Wong then recap a brief pair-up they had in Las Vegas. Next, Wong hands Strange’s to-do list to the pair to complete. As we see the allies talk, we get a glimpse of a random cleaning lady.

The duo waste no time completing the list. First, they fight off the Gator Shaman. The creatures retreat underground after the confrontation. Secondly, they have to stop the Hungry Prince of Hearts. However, before encountering the child killer, they are greeted by a bloody Moon Knight. He has already slain the monster because it was in his territory.

Next, we see Spider-Man and Black Cat halting the Spirit of Mammon. After, the two stop any jiangshi attacks in Chinatown. Then, there’s the exorcise of the 666 trains. After that, feeding the Central Park Dragon Hot Dog. The night continues with two of Peter’s greatest allies fighting off supernatural beings. We then see the woman again as Felicia and Ben talk about Strange.

The duo is shown taking a break from the list. They have a heart-to-heart about how Strange did his job as a hero. Ben then tells Felicia a heartwarming story about a village doctor. This is related to Doctor Strange and his dedication to protecting the world. Felicia is left smiling at the story and asks who told him it.

Turns out, he had Peter’s memories and it was Aunt May that told the story. Now resuming to the list, the pair go up against damned goblins. Felicia tells Ben if he wants to be Spider-Man, he will have to get used to goblins. While fighting them off, they are about to crash into an old man with a cart. Ben and Felicia stop the car on time. After disposing of the goblins, they are left with one more task.

Before finishing the list, Ben asks who is looking over Peter. She tells him not to worry about it and she got two of the best on the job. One of the men is unknown, but the other is Flash Thompson. The former bully is telling Peter a story about girls and a speedboat. We then see this mysterious woman again. Her name is Jimena Garica and she is greeted by the heroes with a warm pretzel. This was their final mission. As the sweet lady enjoys her pretzel, the three talk about Strange and the good he has done. She makes it on her bus safely with her ankle healing.

Ben and Felicia then talk about the world always needing Spider-Man. Ben talks full responsibility for the role with Felicia admitting he is now Spider-Man. She hopes Peter recovers to reclaim the role. Yet, she now acknowledges Ben as the latest friendly neighborhood hero. Jed Mackay continues to shine as a writer for this character! I loved how Felicia recognized Peter’s heroics and sacrifice. Then, the theme of honoring his action was present for talking about Doctor Strange. It comes full circle.

That story Ben to Felicia inevitably proved that he was more than a corporate Spider-Man. The whole obviously did that, but the story continued enhancing that idea. The partnership was also not forced. We went from them hating each other seeing that both meant good. Finally, the goblin reference and their fight at the beginning of the issue were pretty funny. Not to mention, the cameo of Flash.

As for the art, once more it was beautiful! Marcelo Ferreira, Wayne Faucher, Andrew Crossley, and Peter Pantazis did a fantastic job with the illustrations. The overall design for Ben’s suit was awesome! The fight scenes were great too. Personally, I loved the message from Doctor Strange. That was the best one-shot in the issue! Also, the 666 train!