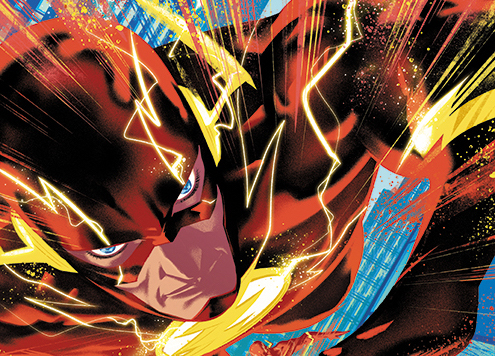 
This was a celebratory issue of the Flash, on par with the likes of Action Comics/Detective Comics 1000 and Wonder Woman 750.

This Grandiose collection of stories about the Scarlet Speedster and the Flash Family were touching and so deep on many different levels others were just really silly and jokey…… ok guys lets get into it!

This was such a great issue!! Everything in this particular story was about reminding Barry all the good he’s done as the Flash and how he’s saving people’s lives just by being a hero. Iris is secretly writing a story about how the Flash affects peoples lives, she interviews so many people and you see a montage of different citizens recounting different events in which the Flash saved them. There was one cute story in particular….. in this story, a little girl is telling a story about the flash saving her class from a talking Gorilla at the zoo and it includes art from the little girl… It’s freaking adorable!!! While Iris is working on her story Barry is working a case for the CCPD which he quickly solves. Right about here is where things get interesting though because who should appear GODSPEED!!!! That’s right God speed is back and he leads us to our newest Villain “Paradox” which we met in the last issue. This story was a really good start for what will come to be known as “The Flash Age”

This was a PHENOMENAL story about the underdog and believe it or not it had zero appearances by the Flash, with the exception of a minor cameo by Wally West …… crazy right?! I know……. but it’s true. The story starts off with a man sitting on his lay-z-boy recliner watching Hockey and drinking a beer, we quickly find out that the man is Captain Cold and not only was he drinking a beer but it seems as though he is on quite the bender as his apartment is riddled with empty beer bottles. The Hockey team is a metaphor for the Rogues as everyone has written the team off and they are considered underdogs…… all of that is about to change now because the Combines Hockey team will prove everyone wrong and win this game. You get a real sense for who Lenard Snart (Captain Cold) is in this issue. Snart goes for a Beer Run but it goes sideways when the store gets robbed. Although Snart thwarts the robbery and pays for his beer (he respects local business) he still gets blamed for the robbery and a slew of other things such as freezing helicopter in mid-air. In the end, Snart gets back to his place just in time to watch the Combines win. All in all, this was the metaphorical story of how Captain Cold and the Rogues will once again rise and prove everyone wrong, and that story is one I will 100% enjoy!

This was pretty much just a fun little story about how anyone can be the Flash. Barry meets with Iris and the question is posed why does “The Flash” have to be you… Barry using his “Speed Mind” sends his consciousness into the speed force and sees other versions of the Flash, one of those versions is Iris, another is Gorilla Grodd, the last version isn’t really a version at all….. yet…. just a teenage female scientist who is reading a flash comic book and chasing a lightning storm using science. Barry sits thinking of everything that is the Flash has allowed him and smiles, no he doesn’t have to the Flash, it could be anyone but he’s glad it chose him.

Flash of all Worlds: Written by Marv Wolfman with Art by Riley Rossmo

This story pit Mirror Master against The Flash Barry Allen, and the message here is that no matter how the odds are stacked against you, keep cool and never stop fighting. However, if I can be brutally honest here for a second….. the art style just didn’t do it for me at all and worse of all it completely took me out of the story. ?

At the Starting Line: Written by Joshua Williamson with Art by David Marquez

My Goodness!!!! The Art Work in this story was Magnificent!! Seriously I cannot say enough good things about how stunning this story was… I fell in Love!! OK enough gushing about the artwork, This is a Jay Garrick story and it was long overdue. This hopeful tale of the original Scarlet Speedster shows him in battle with “The Thinker” aside from the artwork the message here was very obviously awesome, Fear is the Easy way out and being Hopeful is Hard but we must always be up for the challenge because a better tomorrow takes hard work! I Love this Story and now more than ever I LOVE JAY GARRICK!!! ?

This issue set up so many things going forward for the DC Universe while also cementing somethings that we’ve been theorizing. As it turns out some timelines have been merged, histories are convoluted and confusing and it’s up to the Fastest and now Smartest God alive to untangle everything and put it all back in its rightful place. This was a really fun issue and it definitely excited me for what is coming in DC Generations. I hope you guys feel the same way.

This was one hell of a ride and I enjoyed almost every bit of it!! This is a must collect issue and in my opinion, it will be remembered fondly for many years to come and that my friends is a FLASH FACT!!