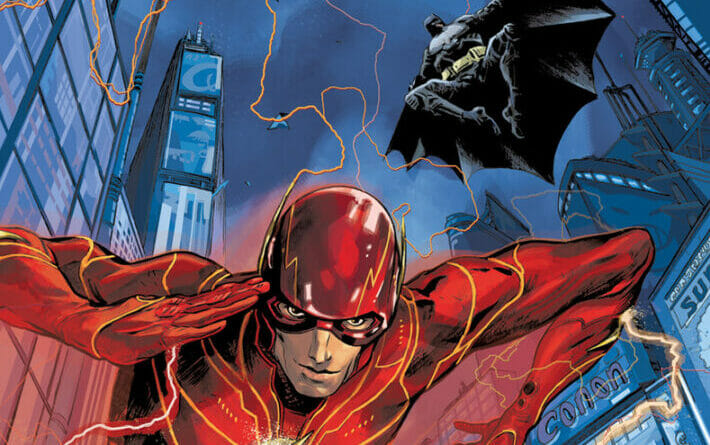 Andy Muschietti’s ‘The Flash’ solo film is set to hit theaters this November and will see the final appearance of Ben Affleck as Batman but will also see the return of Michael Keaton as his version of Batman in a multiversal crossover while loosely adapting the iconic ‘Flashpoint’ storyline from DC Comics.

Before we get to see Ezra Miller’s return as The Flash in his upcoming solo film, we will see the speedster in comic book form as he returns to Central City fully embracing his superhero moniker, adjusting to fighting a life of crime, and dealing with his first solo adviseray, Girder. But as The Flash deals with Girder, he seeks the help of Batman who will take him under his Bat-wing as his mentee and trainer to teach The Flash how to truly master his Speed Force powers. All while leading us through the Speed Force and into Andy Muschietti’s film.

This 48-page debut issue arrives in participating comic book shops and digital retailers on Tuesday, April 26, 2022, with a collection of the three-issue series available in October. Issue #1 features a main cover by Max Fiumara with a variant cover by the director of The Flash, Andy Muschietti. The Flash arrives in theaters November 4. 2022. Issue #2 available in May will feature art by fan-favorite Juan Ferreyra, with Jason Howard providing art for the final issue in July.

In ‘The Flash: The Fastest Man Alive’, Barry Allen’s world-saving adventure with the Justice League has driven Central City’s favorite son to become a truly skilled and inspirational Super Hero. But when a new threat by the name of Girder emerges in Central City, Barry turns to Batman for advice on training to master his powers. Under the Dark Knight’s tutelage, The Fastest Man Alive will have to find a way to defeat this metallic menace or be crushed by Girder’s strength!