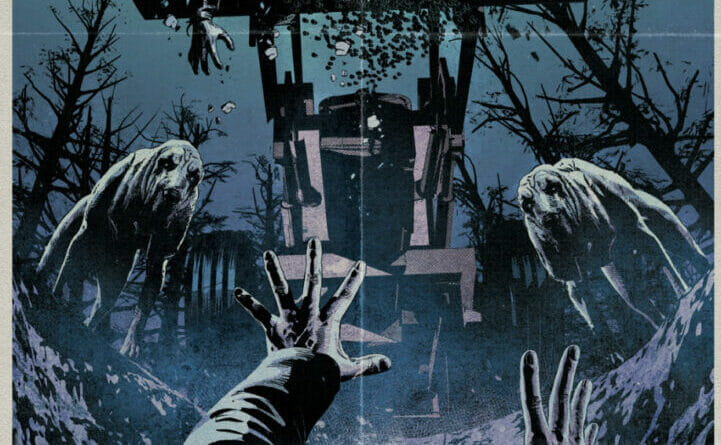 The Fourth Man is a murder mystery by Jeff McComsey and Mike Deodato Jr. and is an AWA Upshot release. A quick overview here of the first three issues. The premise is that three seemingly unrelated bodies wind up in the morgue where two detectives are cased with solving the mystery. Each of the victims was murdered by an unknown assailant. We, as readers, know that these victims were working together to take down a car salesman D’Agostino, organized by a rival salesman, John Romano. As we move into the 4th issue, we are hoping for answers to be revealed and the detectives to unravel the mystery that presented itself in the first issue.

I’m going to start with my review because, honestly, I want you to experience this comic for yourself before you go forward and read spoilers. Because it is hands down one of the best mystery/whodunnit storylines I’ve ever read. If you read the interview I did with the creators, Jeff McComsey and Mike Deodato Jr., then you would know that the storyline and visuals have been consistently amazing throughout the series, and there is no difference here in the ending.

McComsey has done an outstanding job at pulling all of the threads together throughout the mini-series and bringing them to a satisfying conclusion. Out of the four issues, number one and four were my particular favorites. I felt that the opening and closing sequences were so well thought out and the characters more fleshed, not to take anything away from the others though. Jimmy reeked of a PI mixed up in something bigger than he could handle and his poor decision created a flow-on effect for the entire story.

If I had one nitpicky comment, I would have liked to have known and/or seen more from the detectives. They were introduced as having contrasted views in the opening pages of Issue #1 and then that potential problem is set aside. But, even in saying that, the story doesn’t need to have a sob story or a divorcee detective with a bad past to make it interesting. This comic is about the mystery, the victims, and how they got there. Perhaps we’ll see more from the two detectives in the future.

Deodato Jr continues his stellar work with detail and gritty lifelike artwork. The facial expressions exuded emotion as if they were actors on a screen. Each panel is purposefully placed to provide us with information imperative to the story. It is very evident that McComsey and Deodato Jr worked closely together for this. There is a full-page spread of an explosion and you can almost feel the heat emanating off the page—the colors by Lee Loughridge do a fantastic job to supplement the artwork.

If the above paragraphs haven’t got you salivating for this remarkable piece of a graphic novel then I might need to rethink my review because I could not have had a better time reading this. I absolutely love a thriller movie or Netflix mystery and The Fourth Man gave me everything I want and love from those—cliffhangers, red herrings, compelling characters, evidence that makes sense, and a satisfying conclusion—within 100 or so pages. Seriously, get onto it.

There’s Always Room For One More

We open with an almost successful bid to take D’Agostino’s life. In the last issue, we were introduced to a fourth acquaintance, Randy. From our perspective, the whole ordeal has gone from one person to the next trying to get rid of this guy—Jimmy to Shane to Chuck, and now Randy. But D’Agostino laughs at the pitiful price being paid to his would-be murderer.

As Randy begins to empty the bulldozer full of soil onto the live body (the bodyguard is also dead next to him), we see the 666 Clubs/AB tattoo from the unknown assailant in previous issues!! What?? Honestly, my head started to spin. So many questions flowed through: What’s the timeline like here? Has someone been double-crossing? How did Randy get a hold of this?

Four days later John Romano is found murdered. We click back to D’Agostino in the hole and we finally become privy to the answers. We are thrown into discussions and realize that this moment in time happened before all of the killings took place! Randy was turned into a hitman for D’Agostino and took out Jimmy, Shane, and Chuck for $200 grand!

We get a bit of a flashback/montage from different angles in a muted color scheme to show us how it happened. But, no surprise, even though Randy did all he said, including killing Romano, D’Agostino doesn’t provide the money. Bur Randy has taken this into the equation too, and as D’Agostino turns the key in his ignition… BOOM! Cool guys don’t look at explosions.

Through the last few pages, we ride with the two detectives who are letting the homicides roll out until they find the bodyguard, Wendell, who we know to already be dead. They’re on the highway and stop at a servo to fill up with petrol. And who is there to answer the call? But Randy, the man behind it all. It’s a tense moment for the reader as we know what the detectives want to know.

The female detective (both are unnamed) spots the Aryan Brotherhood tattoo and links it with Chuck’s and the jail time he served. She follows Randy. We get a visual of a gun in Randy’s car boot (trunk for American readers). She says, “can I ask you a question?” and the final page is two extreme closeups of their eyes, followed by a mid-shot of the detective and Randy, a white box over the top of their respective guns, and Randy answers, “Shoot.” I got chills. The brilliant bloody twist with a bloody brilliant ending.