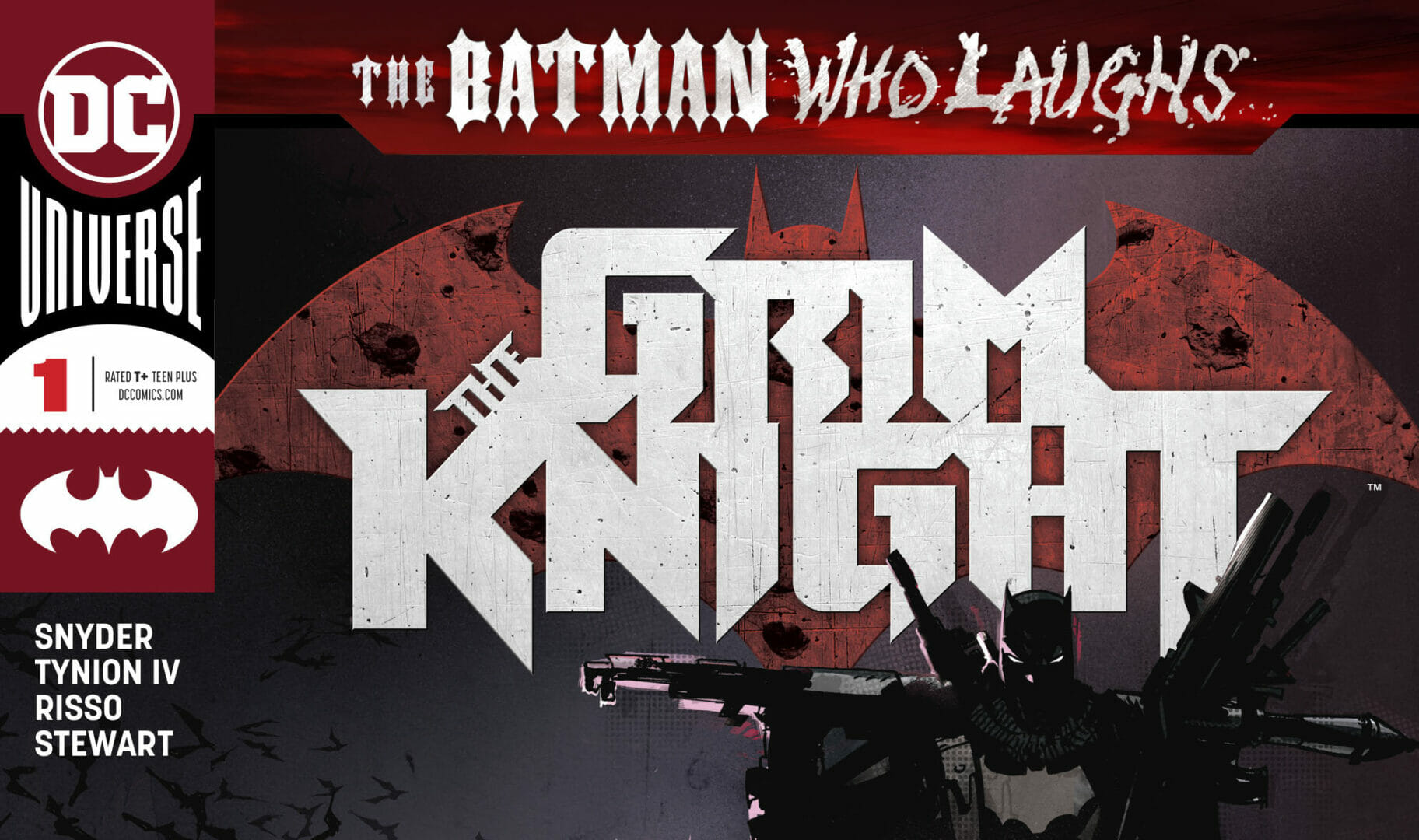 
During the events of DC METAL, Scott Snyder introduced us to some of the most dangerous beings to ever be perceived. Incarnations of Bruce Wayne, The Batman, who have been twisted by greed, fear, anger, and insanity is just one example. Through these incarnations we saw versions of himself that showed us the “What if?” and who in their own right, had good reasons to become what we have seen today. But the Batman who laughs is not like the others; this one is the definition of true terror.

From the pages of DC METAL and his current mini series, we see in such a glorious fashion the Batman Who Laughs, planned ahead and saved an alternate Batman of such skill and prowess for an occasion such as this. Introducing The Grim Knight!

Spoiler review ( since this is a one shot )… the issue was pretty good. I not only enjoyed it, but it actually took me a second read to see why. The fact that this was The Grim Knight telling his story to Commissioner Gordon whom he kidnapped in the last issue, made it feel personal. On the contrary, I felt that The Grim Knights motivation was lacking throughout the beginning of his story. But then… it hit me. I saw it! This is the world Frank Miller crafted in Batman Year One, just taking a wrong turn. LOL Did I find it underwhelming that Bruce pulled the trigger on Joe Chill and only said “Shut up!”?… Yes! But what do you expect a kid to say in the most tragic of scenarios? Obviously we can’t have Bruce kill Joe Chill with another Green Lantern ring because that has already been done. However, a young Bruce picking up the same gun to kill his parents murderer, is pretty badass.

Now for Millers story comparison. Grim Knight has similar training montages as Miller showed in year one, but each instance has him explaining the skills acquired were needed to make sure he would be able to kill every enemy he encounters; which makes perfect sense for a no holds bar Batman. This is the only part in the story I’m conflicted on. Bruce is trying to figure out what else he needs to add to his arsenal of skills and a way to strike fear into criminals. The iconic scene in the study where Bruce is bleeding out, the bat crashes through the window and Bruce felt like showing off his gun collection to the intruder Bat. LOL So he took the “symbol” that his father sent him and shot it? That is just strange to me, but it serves the point that he’s not showing any mercy to anyone.

The Grim Knight is now prepared to dish out his own brand of vigilante justice. Choosing to start out with the major crime families in Gotham. Which is my favorite scene of the book, btw. Filling the room with nerve gas then begins his iconic speech of eating well, to strike fear into their hearts but instead of letting them dwell in the future fear he instills in like in Millar’s version.  He sets the mansion on fire. ( damn hardcore lol ). This Batman is taking no chance with any criminal big or small that could cause damage to Gotham.

Now enter the GCPD with none other than James Gordon, who is not a fan of the Grim Knight at all. Like our Marvel Comics counterpart, he is public enemy number one! Gordon wants to take Bruce down and this is where it stays pretty true to Year One. Gordon was never a fan of a vigilante in his city, but at least in the original, he never killed anyone! This is the Grim Knights Gotham and he has it the way he wants it. Gordon attempts to capture Bruce by luring him with the Bat Signal, but his plan that began will completely backfire. Batman knew this was coming and showed Gordon he had no place in Gotham.

He proceeds to mold Gotham into his own image. Crime was dealt with by extreme prejudice. He built a satellite through Wayne Enterprises that would monitor all of Gotham (Big Bat Brother LOL) and if any sign of crime that would unfold it, will be dealt with swiftly before any damage was done. This was a city that was controlled by fear of angering the Batman. He had complete control to protect his city, complete control of the people, but not all of them. Gordon was still on the CASE. Working tirelessly, he soon learns the identity of Batman and enacts a final gambit to stop the Grim Knight once and for all.

This is what I really enjoyed most about this story. It really wasn’t about out our PunisherEsque Batman. It was just as much about Jim Gordon taking him down! Gordon humiliated The Grim Knight and it was due to his own hubris. This is a quality that our Bruce Wayne has learned to control. He never gets cocky and he plans for the eventuality that he could possibly lose. The Grim Knight felt he was above them all and he learned otherwise.

Overall, as I previously stated, the story was good. My favorite things were actually not all about Batman, but the story surrounding him. A Batman that kills everyone around him loses a bit of the flair and suspense that his rogues gallery provide. The great thing about the tale is we see his weakness and this could potentially be the ways that our Batman will get the upper hand. His reliance on guns and need to have full control will be his downfall. (That’s my theory; let’s see if it holds. HAHA)

Hope you all enjoyed this and if you haven’t read the issue, please do and support your local comic shops! Until next time!

Co/host of The Nerdy Basement and Comics in the Basement