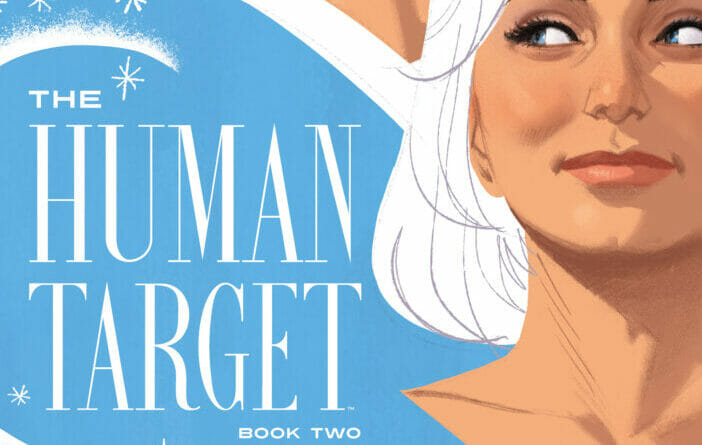 
The Human Target, Christopher Chance has 11 days to live. Justice League International member Ice has arrived at his apartment. Why is Tora Olafsdotter here to meet Mr. Chance?

Christopher Chance aka The Human Target was hired by Lex Luthor to impersonate him in order to see who had it out for him. Someone in fact did and attempted to kill Lex Luthor during a live keynote presentation. Boasting about killing the beast who has oppressed Metropolis’s people, Luthor (Christopher Chance) comes to and knocks out his killer. Turns out that the bullet that was intended to kill Lex Luthor was the very same thing that saved Christopher’s life…partially. Chance is now poisoned and has 12 days to live and in those 12 days, he has to figure out which member of the Justice League International inadvertently killed him, or rather Lex Luthor and why?

Christopher Chance now has 11 days to live and has been greeted at his apartment by Justice League International member Tora Olafsdotter aka Ice. Tora Olafsdotter was sent over by Doctor Mid-Nite who informed her that someone from her Justice League tried to kill Lex Luthor and in the process poisoned Mr. Chance. She’s here to help solve the mystery but also here to give a chilling time with Mr. Chance himself. The two head out for a day out on the beach. Things are a bit tense, almost awkward until that comes to a halt when Tora decides to tell Mr. Chance about her past and her powers.

Ice was born Tora Olafsdotter, a princess of a lost magical Nordic tribe and raised with polar bears. The tribe was eventually discovered by an intrepid explorer. After their discovery, Tora was sent out to the world, eventually joining a number of superhero teams until settling down with the Justice League International. Turns out this is a bunch of bulls***.

Tora was actually born to a small impoverished community up in Norway. No magic. No polar bears. However, Tora started to develop metahuman abilities which allowed her to control ice. Her parents hid this from the rest of their family, afraid that the family would deem her a freak and shun her, leaving her out to die in the cold snow. Tora’s grandfather ultimately discovers that his granddaughter is a metahuman and causes an altercation between him and Tora’s father, his son. Tora’s dad stood his ground and defended his daughter.

Tora’s grandfather did not like this in the slightest and starts beating on Tora’s father. In the midst of the altercation, Tora’s rage implodes and she has rage-filled outburst which resulted in Tora not only killing her grandfather, but also her own father. Tora’s guilt resulted in her running away and conjuring up the story about being a Nordic princess. She lied to herself enough to the point where she even believed it was true.

Chance and Tora continue their walk on the beach as she fills him about the Justice League International in their heyday. Reflecting on things that should have made them so good but it’s nothing she regrets now in the present day. She stops her rant to let Chance talk about himself. Although hesitant, he informs her about his childhood and where he grew up, and how he enjoyed skipping rocks on the water. They later go grab a bite to eat and Tora is as direct as she is cold and asks Chance why he hasn’t asked her about Doctor Mid-Nite?

Chance ain’t no slouch. He’s still ahead in the game. The long game that is. Tora informs Chance about the night Doctor Mid-Nite contacted her about him being poisoned and that he suspects that someone in the JLI is responsible but was dealing with his inner conflict about keeping this attempted murder to himself or seeking further assistance. Instead of revealing to Doctor Mid-Nite that Fire has a surefire reason to want to kill Lex Luthor, she doesn’t, instead, she heads out to visit Christopher Chance.

Tora walks away to purchase a swimsuit so she and Chance can go out for a swim. While out in the middle of the ocean, Chance asks Tora about Fire’s reasoning in wanting to kill Lex Luthor. Tora informs him that Lex Luthor used Overmaster to kill her. Prior to, in an attempt to conquer Earth, Overmaster took over Tora’s mind and used her to do his bidding. She fought against her JLI peers and caused destruction upon Earth. Once she broke free, she unleashed all of her power and attacked him dying in the process. Despite dying, however, Tora came back to life.

To make her death story even more twisted, Tora’s ex, Green Lantern Guy Gardner had been looking into why Overmaster chose to attack Earth. After further research Guy discovers that Lex Luthor called Overmaster to Earth because he [Overmaster] lost to the Justice League before and offered to help him. In a deal made with Overmaster, Lex Luthor agreed to help him take over Earth if he successfully killed Superman. After a rather short disagreement with Guy, Tora goes to meet with Fire. Fire reveals to Ice how angry she is about the whole ordeal with Overmaster and Lex Luthor and threatens to kill him.

Tora doesn’t take Fire seriously until the attempted murder of Lex Luthor gets The Human Target, Christopher Chance badly poisoned. Thus urging her to seek him out and help. Which she does partially as she saves him from drowning after having another cough attack due to the poison in his system. Cooling him off with a kiss to seal the deal.

Chance drops Tora off at her house. Suspicions about which Justice League International member or anyone outside them attempting to kill Lex Luthor have now grown. As I mentioned before, Mr. Chance is playing the long game. He knows how to get information. Tora never spoke to Doctor Mid-Nite, she spoke to Chance. Fire isn’t the only suspect in the attempted killing of Lex Luthor, Ice is too! And as the saying goes, keep your friends close, but your enemies closer.

The Human Target #2 is Tom King doing what Tom King does best. Writing a solid murder mystery with unexpected twists and turns. If there’s anything that I like more about a good murder-mystery is a noir type feel with big-time superheroes and all the unexpected twists I can get. Topped with a lead character who’s ten steps ahead and you have a story that is so intricately layered that it keeps you glued to each and every page.

Don’t get started on Greg Smallwood’s artwork and color palette of choice. Each and every panel of this issue pops and stands out. With each page just as memorable as the last. The close-up shots on Christopher Chance and of Tora Olafsdotter are perfect and the linework for each and every panel is just immaculate.

The Human Target #2 is available now on digital and at your local comic book store.