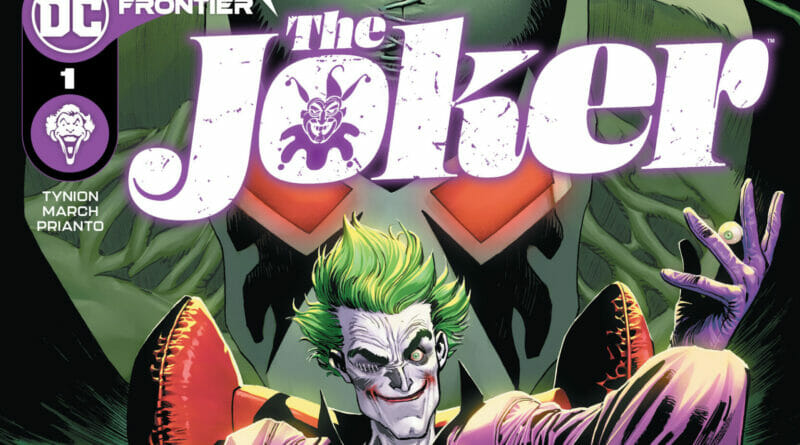 
A Joker title that doesn’t involve Batman! They Must be INSANE!

DC Infinite Frontier has taken us all to unknown regions for our favorite characters. While Death Metal and Future State set the stages for the stories on the way. None are as surprising as The Joker! Writer James Tynion IV continues Joker’s story in a solo tale without the caped crusader lurking in the shadows. If you recall Joker has made his latest mark on Gotham during the Joker War, turning Gotham more chaotic then ever with the help of Punchline (new girlfriend) and after some very dark moments with Batman he leaves the city with a smile.

Joker #1 is not too long after the war consumed Gotham and The Joker has not been seen since. Besides a mention of a time-released attack on Arkham Asylum (Read Batman #106) where Bane and the majority of prisoners and staff were killed. But Tynion doesn’t start off this story with any Joker grand spectacle. We follow James Gordon former Commissioner of the GCPD recalling times before Gotham and his own dealings with the devil called Joker. He can only sit back and watch as the city he once defended becomes more of a cesspool for fear and corruption.

While he is haunted with memories of what he has seen and experienced first hand. He deals with the reality that retirement won’t be an option for an old cop. This takes us to the introduction of Cressida, a very rich and mysterious woman who approaches Gordon a deal of the lifetime, hunt down the Joker! A chance to stop the plague of the Clown Prince of Crime once and for all. With a substantial payment offered she appeals to the notion, he can finally be the person to finally end this evil.

Gordon does not answer right away but we all know where his mind is heading, although the idea of Gordon killing the Joker is a bit of a stretch i can definitely see him putting some fist in that big grin of his. Before i give my final thoughts on this story I will being up the side story added to the book.

We are brought back to Gotham at a familiar courthouse where the trial of the guilt of Punchline is underway. Dr. Leslie Thompkins and Harper Row are at the proceedings. The trial is going as well as you’d expect, witnesses missing or found dead the only the good doctor has been able to add her testimony to the case. If you recall the events shortly after Joker War we see the early stages of the Punchline Trial. She successfully manipulates a large amount of youth to stand by her side.

And Harper’s brother Cullen is stuck in the middle of it. So we’re bound to see how this affects events later on. Moving on the need for more evidence is needed so the assistance of Bluebird is called upon to help lock away Punchline for good.

Now as you can read this story had little to no Joker but only in word of mouth. A story about Joker that doesn’t even have him in it yet. And again I reiterate without Batman either. This shouldn’t work they are a literal Yin and Yang, they are always together. But if Tynion is taking this story the way I think it’s going… it totally works!! Joker is a legendary villain, one that has been capable of adapting to the times, changes, and overall development any character will dream of.

Its not just the evil deeds he does that makes him so impressive its the after effects he leaves on his victims and those that are in direct contact to him. We all know after the Killing Joke James Gordon has never been the same, he was scarred for life no matter what happens he will always remember those moments. and if im going to read a story following Gordon on his hunt for the madman who almost destroyed his family, SIGN ME UP! Gordon is no pushover as it is now we get to see one who will potentially have the resources that Batman has had at his disposal for years to hunt him down.

And to think we’re not going to have a twist at the end of this will be silly of us all lol. But now this is just the tip of the iceberg, I’m just as excited to see what Joker does on his time off from torturing Batman. Like does he literally take in the sun or does he meticulously plan for his next big scheme? Everythings on the table. And to add to it a glimmer of how the outside world is changing with Punchline not being your typical psycho and Bluebird dealing with not just her but her brother now mixed up with a bad crowd.

We like to think the city just goes back to normal at the end of the day but we know better. There will always be trauma to deal with and Batman can’t help everybody. Needless to say, I’m really liking the direction of this book, I think Gordon finally has a chance to deal with his demons, and a little more shine on characters not given much screen time is much needed. What did you all think of the book, are you excited, do you hate it? Let us know down in the comments. As always STAY NERDY!