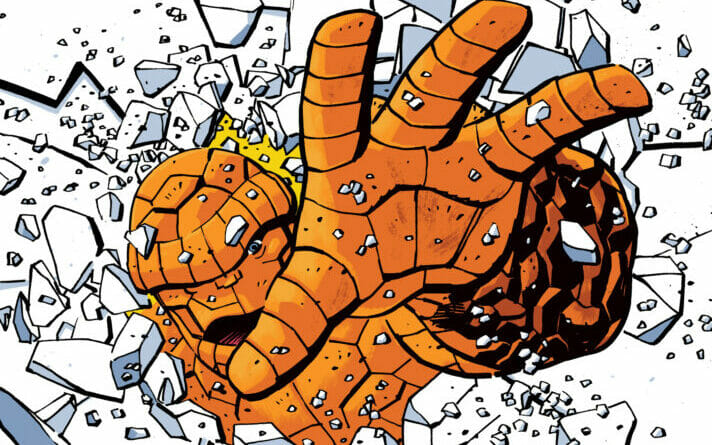 Marvel Comics has just released a new ongoing series for The Thing starring Ben Grimm from writer Walter Mosley and artist Tom Reilly; with colors from Jordie Bellaire and letters from VC’s Joe Sabino. The Thing #1 starts off many years ago with a haunting, grim reaper-esque figure wandering the streets. Ignoring everything he walks pasts, with the exception of a couple making out. The man pulls out a knife and tries to attack this figure only to be tossed headfirst into a parked car.

This figure continues on its path inside this building and knocking on the door of this apartment. Inside, a man defensively opens the door and tells this “grim reaper” that “he can’t have her”. Who is she? Amaryllis Dejure. The “grim reaper” attacks this man, pulls his heart out of his chest fills it with darkness, and puts it back in his chest. In total darkness, he asks the “grim reaper” what does he want, to which it responds “the one I serve asked me to give you this”.

We then jump forward to the present day and meet our titular hero, Ben Grimm arriving at the Baxter Building only to find it empty. As Reed Richards and Sue Storm are off in Russia and Johnny Storm off in Arizona. Ben decides to call his fiance Alicia Masters, only to not get an answer. The following day, Ben comes across Alicia who’s out on a friendly stroll with her friend Alejandro. The Thing gets jealous and has a random outburst of rage thinking Alicia has replaced him with someone else due to him going away for a short while.

Trying to deescalate the situation, Alejandro pepper sprays Ben Grimm in the eyes causing him to toss a parked car into other parked cars. The Thing is then arrested by the NYPD and tossed into a containment cell in where he runs into Hercules. Trying to break free, Hercules informs The Thing that the containment cell is made out of synthetic vibranium. He even mentions that Thor’s hammer can’t even break it. The Thing asks Hercules why he’s also locked up but Hercules doesn’t have the slightest clue.

Back in Brooklyn, the man we meet in the apartment at the start of this issue is a man named Bill who is now donning a new look and going by the name of Brusque. Back in the containment cell, The Thing and Hercules formulate a plant to break out. Hercules, sensing that something is wrong, informs Ben that he might be cursed. The Thing takes it at face value but Hercules is being serious.

Ben manages to break them out of the vibranium cell only to be greeted by the NYPD and Reed Richards, who just so happens to have signed release papers for Ben, placing him under house arrest. Hercules also warns Richards that Ben is cursed and that he needs to be checked out. Reed suggests seeing Doctor Strange in order to conduct a magic test but Ben brushes it off. Back at the Baxter Building, Reed informs Ben on how he learned about him being locked up.

Reed tells Ben that he needs to head back to Russia and leaves the building. Ben walks around the building solemnly. Placing a piece of the vibranium cell inside a testing machine. He then meets with Alicia who is thoroughly upset about his actions. Alicia calls off the engagement and tells Ben that they need a break and need to start seeing other people in order to see what life without each other would truly be like.

As Ben lays down for the night, he is greeted by a fairy/avatar named Calixte, who tries to encourage him to use Elysium Courtship Dancers as a way to connect with new women who might share the same interests as him. Essentially, this is Tinder. Ben decides it’s best to go to sleep segueing into a dream a horrific dream sequence in which all life in the universe is dead and decaying. Including the likes of Galactus, Surtur, a Celestial, and many members of The Avengers.

Ben is greeted by the “grim reaper” whose real name cannot be spoken by mere mortals but is referred to as Mot. As with our biddy Bill aka Brusque, Mot takes Ben’s heart fills it with darkness, and puts it back in his chest. Waking him from his sleep. After being awoken Ben fills out his Tinder — I mean his Elysium Courtship Dancers profile and is matched with none other than Amaryllis Dejure. She introduces herself to Ben and tells him to meet her at Radio City.

After Amaryllis’s performance, Ben and her exchange words only to be interrupted by Brusque himself. It is not yet known that the connection is between Bill and Amaryllis but it’s giving off heavy vibes of a love gone wrong and he’s the obsessive ex who just hasn’t let the facts sink in.

Overall, The Thing #1 was an enjoyable read with great pacing. Leaving enough breadcrumbs to build an interesting mystery around Mot, his unnamed master, and our new villain Brusque; and what kind of entanglement Ben will find himself in now that he and Amaryllis have met. This is giving heavy Will and Jada Smith entanglement vibes and I’m here for that kind of drama, pass me the tea!!! As for the art, we get some really beautiful shots especially in the beginning when we meet Mot and he gives Bill aka Brusque what we could assume to be is his source of power and The Thing’s dream sequence where he meets Mot. All perfectly complimented with Jordie Bellaire’s color palette.

The Thing #1 is out now at your local comic book shop and on digital.