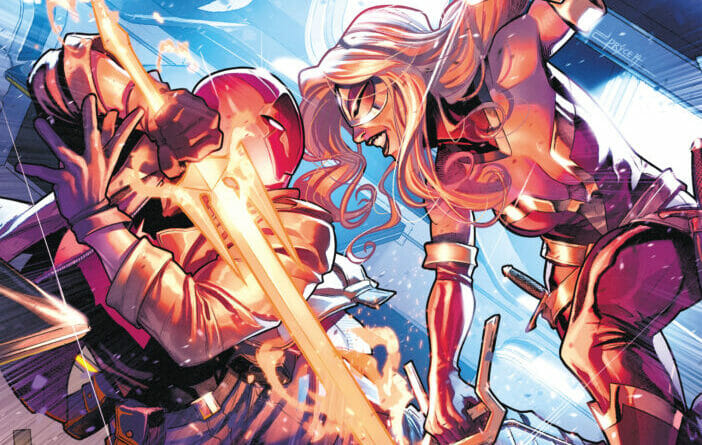 It’s been a while since we updated you all on what comics DC Comics are being released week to week. I’m trying to do a better job at keeping up with all the news and such so please bear with me. This week we have previews for every issue being released in the week of November 9th, including brief synopses for each issue. Since you’re already here, let us know what issues you will be picking up this week! Let’s take a look!

Black Manta and the mysterious Torrid violently collide when the truth of Manta’s link to Atlantis is revealed! Torrid and Manta’s fates violently collide and Manta’s link to Atlantis is revealed! Gallous uncovers Manta’s act of heroism, but will Manta continue on this path? Or will he turn away from good to teach Gallous that ice water in your veins is necessary for survival?

Superman and Lobo’s dreams come true! But maybe it’s not always best to get what you wished for. When the godlike alien Numen brings the planets Krypton and Czarnia back from the grave, he makes a terrible error and puts Superman and Lobo on the wrong home planets! Now each must find their way off the resurrected worlds that seem to be their worst nightmares come to life!

Detective Blair Wong set her sights on Bruce Wayne as a source of information about the Batman—but neither of them was ready for the sparks that flew when they met. Unfortunately for their relationship, the imposter Batman has killed again, and the pressure is mounting to close the case…immediately!

The Batman and Scooby-Doo Mysteries #8:

The world’s greatest detectives—Batman and Mystery, Inc.—face a mysterious scheme concocted by Harley Quinn and the Joker! A mysterious zillionaire has taken over Gotham’s waterfront. But what do Batman’s wildest foes and a supercharged ghost have to do with it?

The legendary story of Batman and Robin has reached nearly mythic proportions: the crime-fighting Dynamic Duo, always one step ahead of the criminals they pursue and never meeting a case too big. This isn’t that story. This is the story of a young Dick Grayson, newly orphaned, struggling to find his way in a strange, difficult, dark new world…This is the story of Robin and Batman. The bestselling creative team behind the Eisner-winning Descender, Jeff Lemire and Dustin Nguyen reunite in Gotham City to tell the story of a remarkable young man learning to navigate an incredible new world!

Wonder Woman faces her greatest threat yet: a world that doesn’t need her! Lost and without purpose, Diana travels to visit an old friend looking for answers. Meanwhile, her image as a hero has taken a shape all its own and it’s ready to fight back…literally!

IT’S ALL BEEN BUILDING TO THIS—past and present and future all collide here in the final issue of this monumental series.

Everything connects back to J’onn’s death, Batman’s final decision, and Superman’s regret—it all has been leading to this final confrontation with Darkseid. Who lives (some do!)? Who dies (some do!)? It all culminates in a bombastic finale from which the Justice League will emerge eternally changed.

The terrifying Sampson family is ready to exact their revenge on the Clown Prince of Crime for the murder of one of their own during A-Day! Will Gordon risk his life to save…The Joker? The shocking series continues with the most horrifying issue yet! Backup: Punchline and Harper Row go head-to-head for the life and safety of Kelly Ness! If Harper loses, the radicalization of young people in Gotham City will know no limits!

First dates are usually memorable, and Harley’s is no different. When Hush decides to disrupt their date, Ivy takes action in a way Harley’s never seen before. And will someone get rid of Gordon, please?!

Outsiders story: FEAR STATE TIE-IN! The Fearful has turned the Outsiders against each other! Tim Drake has entered the fray to save the manipulated team, but it won’t be enough. The future of the Outsiders depends on the Signal, but he’ll need help…from the world of Future State. Signal, meet Future State Duke Thomas, and listen to every warning he has to deliver!

Batwoman story: FEAR STATE TIE-IN! Batwoman now has the help of her sister, Beth, who is currently disguised as Red Alice to hit the underground network of villains in order to trace where the Anti-Oracle is. The only problem is, all of this is too familiar for Beth…and as old habits die hard, so might this be for Beth in keeping Red Alice at bay.

Azrael story: Dead criminals are walking the streets of Gotham City, and Azrael’s faith is shaken. Is the rapture truly upon us, and will this avenging angel be called home? Or is there a more sinister and human force at work, and what warrior has been stalking Jean-Paul Valley without him noticing? Threats to Azrael’s body and soul are here, and he’ll need more than a flaming sword to stop them.

Raven, Red Hood, and Donna Troy are on the trail of coldhearted killer Lady Vic! How long before bullets start to fly? Meanwhile, Conner Kent has a close encounter with Tamaranean royalty. But with his powers lost, can he survive? And Beast Boy? All Beast Boy wants to do is enjoy his milkshake in peace!

It’s all-out war as the Hunt the Batman arc comes to its pulse-pounding conclusion! The Next Batman faces off against Nightwing and the entire Bat-Family while Jason Todd, now known as Peacekeeper Red, must stop Warmonger from driving every citizen in Gotham City to riot. Can Bat and Red win this one? Can they even survive?

The continuing high-octane story of the early years of Gotham’s most famous butler! Trapped in a burning building in the Arctic, Alfred faces unimagined savagery and appalling conditions, but finds something more dangerous and brutal than living, breathing weapons: the cold. It’s a race against nature and time as Alfred has to use his resourcefulness to stay alive until sunrise!

THE WARWORLD SAGA BEGINS! After learning of an enslaved race with mysterious ties to Krypton, Superman and the Authority travel across the galaxy to dethrone the new Mongul and liberate Warworld. Introducing new characters and a new corner of the DC Universe, the biggest Superman event since the Death and Return of Superman begins HERE!

The Dakota crackdown comes for Static’s friends! As the government cracks down on the super-powered teenage Bang Babies, Dakota’s schools are getting emptier and emptier…and with someone he loves in the sights of the roundup, Static must put his own life and family at risk to protect them!!

Jace attempts to stem the tide of misinformation from the Seer as this mysterious adversary sends a heavily armed mob to a juvenile detention facility to break out a member of their militia. When Jace realizes his mother, Tanya, is at the facility, he’ll stop at nothing to save her! But will he be too late?

If you’re wondering where Superman: Son of Kal-El #5 is at? It appears that the issue is no longer releasing on November 9th as initially planned, when Jon Kent’s coming out was first announced. This could be to the overwhelming wave of controversy his coming out has caused, mostly from everyone and anyone who doesn’t read a comic book. But also the death threats the creators have been receiving in anticipation of the issue’s release. Superman: Son of Kal-El will most likely release the following week on November 16.