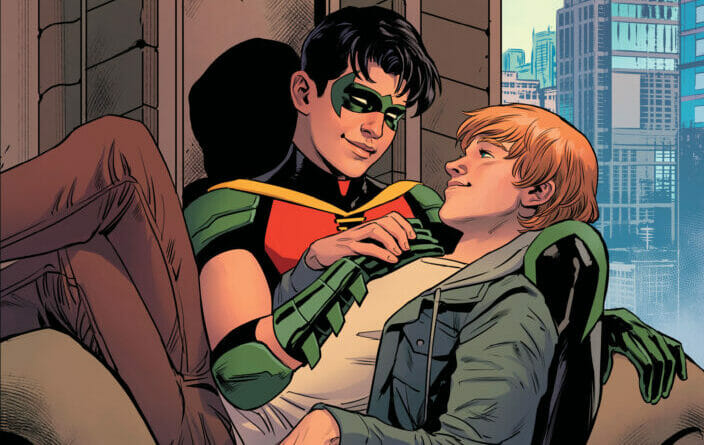 It’s been over a month since we’ve dropped a full-length preview ost like this one for DC Comics and that’s all due to the overwhelming amount of work that needs to be covered here at The Nerdy Basement, in addition to the much-needed break from reality that I took a couple of weeks ago when I went on vacation. It goes without saying that I had no intention of coming back to reality, I mean who does, right? Especially when the vacation is that much more memorable than anticipated.

This week’s batch of DC Comics releases are small but hefty, from Batgirls #7 to Naomi: Season Two #4, The Sandman Universe to Batman Urban Legends, and the ongoing celebration of Pride Month with DC Pride: Tim Drake Special #1, there is something for everyone. As per usual, DC Comics is always generously providing us with previews for their weekly releases, so take a look down below, check out each preview, and feel free to reach out via social media to let us know which titles you will be picking up this week!

With the Batgirls’ damaged reputation still on the line and repairs on the Clock Tower well underway, Babs just might have finally found the key to their redemption. Meanwhile, serial killer the Hill Ripper is still on the loose! The girls receive their first major break in the case from an unlikely source—unfortunately for them, the main suspect is among the most enigmatic and dangerous villains in all of Gotham!

Batman and Zatanna stand up against the curse they’ve been facing throughout their whole relationship! Ace and his Super-Pet compatriots make their last stand. Will the new Birds of Prey crumble because of their lack of trust in each other? And we go back in time for a Batman and Alfred team-up story where Alfred’s taking the lead on the action!

The leader of one of Paris Island’s most powerful gangs needs to add some soldiers to his army…and has his sights set on Wise Son! The heroes might’ve cleaned up the streets, but in the shadows, there’s utter chaos as rival gangs battle for control. Wise could have a seat at the table, but he’s been out of the game for so long…does he want back in? He came back from Afghanistan a changed man…

The breakout story from Batman: Urban Legends is collected in one volume for the very first time, in time for Pride Month! Tim Drake’s search for a missing friend kidnapped by the villains known as the Chaos Monsters leads Tim to realize his identity as a bisexual man. Collecting the Tim Drake stories from Batman: Urban Legends #4-6 and 10, with a brand-new story that sees Tim teaming up with his former Young Justice teammates and the Batgirls, beginning Tim Drake’s 2022 path!

The real Bruce Wayne returns to Gotham City as Batman, but Jason Todd doesn’t believe it’s really him after Hush posed as Bruce for all those months. And what will this mean for Jace, the Next Batman? Just when things can’t get any worse, another mysterious Batman attacks the Magistrate! Also in this issue: the fate of Damian Wayne!

How do you stop a killer who feels nothing: no pain, no emotion a killer who believes their actions only make the world a better, more beautiful place by exposing the literal and figurative ugliness of the rich and powerful? The more important question for Batman as he squares off with Manray…what if he can’t stop him?

TV’s newest sensation, Naomi, finds herself at the center of the biggest drama of her entire life! The mystery of Dee is revealed, and with it comes terrible news that will change Naomi’s life forever. Meanwhile, the town itself has turned on Naomi. They’ve had enough of the superhero chaos she has brought to this usually quiet part of the world. All this, and a cliffhanger last page nobody will be ready for! From the original Naomi creators comes another blockbuster chapter in the life of Naomi McDuffie!

Lex Luthor and President Bendix have joined forces to unleash the Gamorra Corps on Superman…and put a stop to the first son of the Last Son of Krypton once and for all. But a new hero has joined the fight…and he’s going to use that tin-can suit like a chew toy if Luthor isn’t careful. Welcome back, Krypto. Who’s a good boy?

Bizzarosaur has invaded Supersaur’s home village, and now the super-powered sauropod must defend his home and the humans who have raised him since his arrival on Earth. But will he be strong enough to defeat this strange foe, or will he need the help of Wonderdon and Batsaur, who are both converging on his location? A whole new Trinity assembles for the first time in this adventure that will need to be seen to be believed!

It’s not in the Corinthian’s nature to save a life—but if he wants to understand the nature of the Smiling Man, he’s going to have to protect one of the few people to have ever seen him. Unfortunately, considering the strict orders he’s been given by Dream, saving a life very much endangers his own…

As Cizko continues to build his forces, Wonder Woman discovers that she will not have to face the threat of this new Villainy Inc. alone. Diana is joined by friends old and new, including Steve Trevor and Etta Candy, now operating as agents of Checkmate, along with displaced Asgardian heartthrob Siegfried. But as Cizko continues to gain power and influence, will this be enough to stop the villain once known as Dr. Psycho, and uncover the dark nature of who is really calling the shots? Plus, a new chapter of the Adventures of Young Diana!